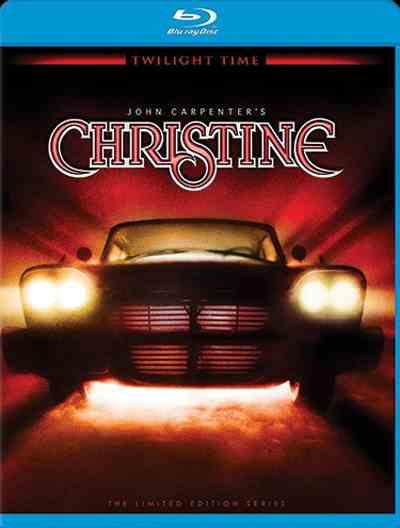 By the early 1980’s, following the success of Carrie and The Shining in the cinema and Salem’s Lot on TV, Hollywood was falling over itself to film anything from the typewriter of Stephen King. King’s novel Christine was only published in the US in the April of 1983, but John Carpenter’s Christine was in theaters by December.

Indeed, 1983 was the peak year for Hollywood’s King-mania, with two other major adaptations of his novels hitting the screen that year, David Cronenberg’s The Dead Zone and Lewis Teague’s Cujo. The latter was about a woman and her son besieged in an ordinary car by a killer St. Bernard. In Christine the car was the killer.

Christine was actually produced by Richard Korbritz, who produced not only Carpenter’s 1978 TV movie, Someone’s Watching Me! but also the 1979 TV version of Salem’s Lot. Of course the idea was nothing new. Steven Spielberg first came to attention with his TV movie, Duel (1971 – considered so good it was expanded for theatrical release), in which a truck relentlessly pursued a businessman (Dennis Weaver) across desert roads. That was followed by Killdozer! a 1974 TV movie about a killer bulldozer, The Car (1977) and The Hearse (1980). While less malevolent antecedents included the reputedly awful 1965 sitcom My Mother The Car and Disney’s The Love Bug (1968).

Christine was King’s thirteenth published novel, a 500-plus page blockbuster about a haunted 1957 Plymouth Fury and the put-upon teenager, Arnie Cunningham, who buys the wrecked old auto. Bill Phillips’ screenplay necessarily streamlines King’s lengthy novel, keeping the focus tightly on the friendship between nerdish Cunningham (Keith Gordon) and everyman cool-but-nice guy Dennis Guilder (John Stockwell), and Arnie’s vicious bullying by a gang of high school thugs led by Buddy Repperton (William Ostrander channeling John Travolta’s similar role in Brian De Palma’s King adaptation, Carrie). When Arnie buys a beaten-up 1957 Plymouth Fury his personality begins to change and he wins the heart of the most beautiful new girl in school, Leigh Cabot (Alexandra Paul). Meanwhile Arnie restores Christine to her former glory, but Christine is a beautiful, vengeful and jealous 21-year-old, bad from the day she was made…

Some films improve with age. The only previous time I have seen Christine was when it played in UK cinemas in 1984. It seemed disappointing then, not only compared to the source novel, but compared to both other films based on King novels and by the standards of previous films by director John Carpenter. Christine had a lot to live up to when compared to such films as Carrie, The Shining, The Dead Zone, Halloween, The Fog and particularly Carpenter’s previous film, the terrifying, breathtaking masterpiece, The Thing. Christine isn’t anywhere as good as any of those films, but without the novel fresh in my mind, as it was when I first saw the movie, and with Carpenter having gone on to make Escape From LA, John Carpenter’s Vampires and Ghosts of Mars – why do filmmakers get worse the more experience they have? – Christine looks pretty good today.

What also disappointed 30 years ago is that the film isn’t remotely frightening. Something one rather expected then from both King and Carpenter. But in an era of crass, shoddy, sordid and plain nasty horror films Christine stands out as a model of refined filmmaking. To a certain extend the film reworks Carrie, even the title is another female name beginning with C, and both Carrie and Christine have unnatural powers of destruction. Both Christine and Carrie, the films, together with another Twilight Time Blu-ray released the same day as Christine, The Fury (which I reviewed here), are fantasies of teenage empowerment and revenge. Like Carrie, Christine plays out against a backdrop of high school bullying, with Arnie and Dennis essentially taking the roles of tormented Carrie White and nice-girl Sue Snell, which puts Leigh Cabot in the same position as Tommy Ross (Sue’s nice boyfriend in Carrie). The gang of bullies have the same function as the bullies in Carrie. And Christine is the avenging Fury.

The film is well played by the young leads, hard-edged in language, but surprisingly sweet, and in a way innocent in its depiction of friendship and teenage affection. While Keith Gordon transforms from school nerd to cold-hearted sociopath most effectively, Arnie’s interest in Leigh being primarily sexual, though unconsummated, Dennis’ gradually growing interest in Leigh is portrayed as a respectful and surprisingly chaste relationship of equals. John Stockwell essays the sort of friend we would all have liked to have had at school. He’s a cool, good-looking, well-liked school sports star, yet rather than being the arrogant dumb-jock of so many movies, he’s kind, considerate and protective.

Unusually both male leads have gone on to become directors, Gordon helming the film version of The Singing Detective, as well as Wild Palms and episodes of Dexter for TV, while Stockwell has directed episodes of The L Word and a run of aquatic movies such as Blue Crush, Into The Blue and Dark Tide.

Refreshingly, Alexandra Paul, most famed for her aquatic screen career in Bay Watch, though obviously cast at least in part for her remarkable looks, isn’t treated as a sex object, but characterised as an intelligent young woman who plays an important role in the story. Like other strong women in John Carpenter movies, even though she has to be rescued by our hero, Leigh is neither a scream queen nor a babe whose role is to disrobe as frequently as possible.

Christine takes a while to get up to speed, but the action and suspense set-pieces are good, and while they never scare they develop a reasonable amount of tension. Some of the pre-CGI era visual effects work is astonishing. The film is lovingly lit and shot by cinematographer Donald M. Morgan (also DP on The Rage: Carrie 2) with a fine eye for gleaming metal and gorgeous reflections. An extended sequence in the rain is ravishing.There are excellent supporting turns from Harry Dean Stanton, Robert Prosky and Roberts Blossom. Kelly Preston, the future Mrs John Travolta, has a small supporting role.

In place of terror, there is a nice thread of jet black but understated humour running through Christine. The film is polished as a vintage automobile should be and if it disappoints it is because it doesn’t pack the punch one expects. The finale, while perfectly accomplished, would be completely aced in terms of action, intensity and raw emotion by a directly comparable showdown in James Cameron’s The Terminator, a film released just 10 months later. Somehow, when it counts, Christine never quite fires on all cylinders.

Christine drives onto Blu-ray courtesy of Twilight Time in a limited edition of just 3000 copies. Unfortunately the run sold out within hours of being made available for pre-order. Which means this review is essentially for the record, or for anyone considering paying ‘collectors prices’ online. With intentional humour Twilight Time also released Brian De Palma’s The Fury on the same day. Copies are still available. Why Christine sold out instantly but The Fury remains available a mystery. Christine makes for a better Blu-ray package but The Fury is far the better film.

Christine comes with a 1080p transfer in the original 2.35-1 theatrical ratio, and looks stunning. The picture is essentially flawless, with the very light grain structure one expects from a 1980’s Panavison shot production. The sound is a full-bodied and powerful, presented in a crisp and clear 5.1 DTS-HD Master Audio track.

Audio extras are an entertaining and informative commentary track with Carpenter and Gordon and an isolated score track of the music by Carpenter with his regular collaborator Alan Howarth. Unfortunately, unlike Carpenter’s unforgettable music for Halloween his score for Christine is functional but unmemorable. Centre-stage musically in Christine is a selection of old rock ‘n’ roll, numbers which play on the Fury’s radio.

The main extra is a good making-of documentary by Laurent Bouzereau made for a previous DVD release in 2003, and arbitrarily split into three parts. This is frustrating because after each part the disc reverts to the menu and the next part has to be selected separately. It is not possible to play all three parts straight through. This feature is presented in the 4:3 ratio with clips letterboxed. It is standard definition but upscaled, and looks very good. The three sections are Ignition (11.52 minutes), Fast and Furious (28.54 minutes) and Finish Line (7.17 minutes).

The final extra on the disc is a collection of 21 deleted screens, presented letterboxed within a 4:3 frame. Some add fresh material, others are alternative or slightly extended versions of sequences in the film itself. The presentation quality is fairly good, though some scenes are unfinished, with parts of the audio missing, or contain sound from the set. It’s clear why most of the scenes were not included in the final version of Christine, though a few could have added a little more texture to the story, at the cost of slowing the pace.

Finally there is a booklet with an insightful essay by noted writer Julie Kirgo. All in all this is an excellent package. Those disappointed by a lack of new extras, other than the isolated score and the Kirgo essay, should consider that regardless of their vintage the extras already cover pretty much everything. A new documentary would essentially be superfluous, and really, Christine just isn’t that great a film to need more extensive coverage that it already has been given.