To put it simply – not everyone is a Kevin J. Anderson or David Weber or Eric Flint or Robert Heinlein. Some authors – I would venture to say, MOST authors – produce perfectly fine books: readable, enjoyable, well-structured, skillfully plotted and with fully-developed characters. And yet, something happens.
They never quite get the recognition they deserve. The book slides into obscurity, and the author – having watched their baby disappear from the public eye – often follows. 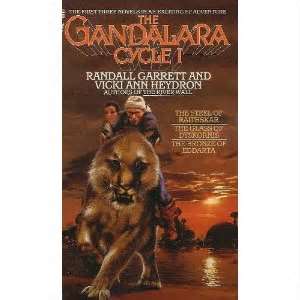 This week – a seven-book series!

Okay, so seven books isn’t much – today. David Weber, Eric Flink, WEB Griffin, Clive Cussler – all have series of WAY more than seven books, and still going.
But – this series was begun in the late 70s and finished by the mid 80s – which makes it HIGHLY unusual.
Yeah, yeah, enough technical stuff. Seven books, get on with it.

The books are written in the first person, from the perspective of Ricardo Carillo. Carillo is a retired professor of languages and former sergeant in the Marines, taking a cruise on the Mediterranean. This is a final gift to himself, as he is dying – only a few weeks left to live. He makes the acquaintance of Antonia Alderuccio, a young woman from Italy, and spends a few minutes talking with her before a fireball – a meteor – slams into the ship.

In a strange, hot, desert world.

His first order of business is NOT figuring out how he got there, or who he is, or even what is going on, but rather simply surviving the desert, and the massive sabertooth tiger-looking animal that is following him. THEN he can deal with who he is, because he’s not in the same body; where he is, because it’s nowhere on the Earth he knows; and why he is there.

Fantasy? Certainly. But the authors have created a logical and consistent world in Gandalara – language, customs, climate, flora and fauna – which all remain plausible when the science finally enters the story in the final book.

The storyline is familiar, a man on a quest to know himself and his destiny, encountering friends, creating enemies, and discovering an unexpected love. And yet, with the exotic and unusual setting, you are easily sucked into the tale.

Having read and re-read these books numerous times over the past almost thirty years, I have yet to find any major plot holes, which is always a pleasant surprise. And I still uncover new details on each successive read.

You can purchase these books as single volumes (in order, they are The Steel Of Raithskar, The Glass Of Dyskornis, The Bronze Of Eddarta, The Well of Darkness, Return To Eddarta, The Search For Ka, and The River Wall). Of course, that may be tricky as they have been out of print for, well, decades.

This is a fun series, plenty of swordplay, banter, solid characters and a smattering of good science. In short – exactly what a lost gem should be.

Moving forward I welcome your comments and suggestions! If there is a book YOU want me to review, drop me a line! You can find me on Facebook (very creatively, Adam Gaffen) or you can send an email to   OR you can simply leave a comment here!