Being Human is a fascinating TV show, originating in a time before Twilight became all the rage and posing an interesting question: what if your neighbours weren’t human? 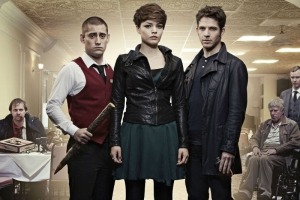 We all wonder what our neighbours get up to behind closed doors but what if they were hiding something supernatural? The pilot, originally broadcast on BBC Three here in the UK in February 2008, threw together emo vampire Mitchell and his werewolf pal, George, as they moved in together. The problem is, the house they moved into was already occupied, by a tea-making ghost named Annie.

The pilot was revolutionary enough for a full series to be made and while, of the original cast, only Russell Tovey continued into the series. The episodes were stark and sometimes horrific. For the first time, being a werewolf wasn’t all humping trees and chasing rabbits, the change hurts. Similarly, being a vampire, has its own pros and cons with Mitchell constantly trying not to fall of the wagon and even when he did he accidentally ‘recruited’ the one girl he fed from.

Of the three, being a ghost was the most mysterious. Ghosts have typically been amorphous creatures with no special powers other than a spot of telekinesis and the ability to scare the crap out of the living. Yet as we followed Annie’s journey, it became clear death was not a pretty thing with the recently deceased trying to drag her into purgatory even as she learned how to see auras, touch and taste through other people and teleport.

Five years on and the series not only has a US incarnation but the fifth series has just started on BBC Three. This series has a new line up, all introduced in previous seasons, but stays truth to the vampire-werewolf-ghost triad, with OCD vampire Hal, the painfully sweet and innocent werewolf Tom and spunky ghost Alex who would really rather not be dead. By changing the three main members of the cast, the series has really been shaken up and allows for some fresh perspective that will keep the series new and interesting.