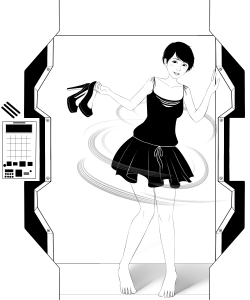 Mars was out of hand sanitizer.

This was a problem, one compounded by the fact that she had finished her most recent, most delicious bottle only yesterday and would be unable to order another without raising suspicion.

Her parents had already banned mouthwash from the house when her visi-contacts reported back to them that she had gone to swish more times a day than was necessary, and that every single time she did there was never any footage of her spitting it out. She had promised to stop but “the hairspray defense,” as they called it, a name taken from another banned household product, would not work this time. As of that moment, their home, and by extension Mars, would not receive hairspray or mouthwash until her parents lifted the blockade.

She sighed. Pulling up a half dozen info windows with a few quick finger gestures, Mars scrolled social networks, reading posts from various circles. Patsy Xiang had been the one who had given her the hand sanitizer idea, cleverly sharing an article written on the subject back in the twenty-first century. She had wedged it in with a dozen other links about the culture of the era, and Mars had engaged and read all of them, knowing that her visi-contacts reported every digital interaction back to her parents. Patsy was smart to include the camouflage of the other links. She gave her followers a backup plan, which is why she had been able to amass so many of them. Try as they could, no parents had broken her code yet.

Unfortunately, Patsy and the rest of Mars’s contacts had left no new clues today. Closing all but one information window, she stood from where she had been lying in her bed. It deflated and folded back into the floor. The feed continuously scrolled as her contacts updated and posted. Words zoomed fast, but she could pick out a relevant data feed by recognizing key words if it passed by. If nothing was up by lunch, she could always search herself, but for now she needed to keep from doing anything that would draw her parents’ attention.

“Good morning Marisha,” a dour voice said. Mars, keeping her eyes up high, pocketed the empty sanitizer bottle. She and her visi-contacts did not see it vanish into her pocket, so neither would her parents.

“Hey Demonseed,” Mars pretended to yawn. She stretched her arms, absentmindedly smoothing out her single-piece jumpsuit. Like all modern clothing, it would self-correct as soon as she left her house. Already she had picked out an outfit that would be projected over it – a cute blue and black sundress with tiny purple fish that swam across her waist. It was a mod she had designed herself, and Mars was very proud of it.

“Marisha. My name is Lemonseed. You gave me that name. Why would you call me that?” the program that ran her room sounded as if it was about to cry.

“Want me to make you happier?” Mars asked. “Because I could readjust your personality. Want to be an unwavering, sing-song-sickening optimist again?”

Lemonseed did not respond. He was not a true artificial intelligence, just the query and maintenance program for Mars’s room. As a result, he had a fairly strict set of parameters to operate within, although he could always be wired into other services and devices if necessary. Most home operating systems were compartmentalized in this way, usually synced with family-member visi-contacts and under an umbrella program that had ultimate control of the house itself. Compartments into compartments into compartments that Mars, and to a greater extent her parents, controlled ran their home as efficiently as possible. The backups lined up even further, providing redundancy for every system from food and water to the entertainment feeds that Mars’s visi-contacts screened.

Mars walked through her house, racking her brain to try and figure out where she could get more alcohol. It was unlikely that the kitchen’s edibles and imbibables would contain what she needed, otherwise she would never have started drinking hair spray. Only her parents could get alcohol, real alcohol, and they had made it abundantly clear to her that they would not allow it in their house.

She decided not to check in with her parents. If they really needed to get in touch with her, they could just message her through her visi-contacts.

The door to the house slid open; thousands of projectors on her skintight jumpsuit activated instantly. In addition to the dress hologram, they adjusted the blemishes on her face, straightened out wrinkles and bags under her eyes, colored out the grey in her hair, and reddened her lips. Her straight hair needed no further adjustment, but Mars did have several tools and clips she could use if desired.

The weather in Dallas was perfect, as usual. Only once had Mars ever seen the climate adjusters fail, and even that wasn’t so bad. It was brutally hot for about a day, yes, but she and everyone else just stayed home for the afternoon while it was fixed. By now most cities had similar machines keeping the urban clusters at agreeable temperatures, with a few outliers still clinging to more natural ways. These “frozen” cities dotted the world, with names accompanied by the decade they believed mankind had reached its pinnacle such as Commerce 2290 or Pigeon Forge 2320. More often than not they were retirement communities, although some of the younger extremists would recreate places from centuries past, living as they believed people long dead had lived.

Mars didn’t understand them. She loved the present, despite her teetotalling parents, and could only imagine what wonders lay in store for her in the future. She tapped her forefinger to her thumb, scrolled through different transports with each rap, and then found one heading to where she wanted to go.

A boxcar hovering magnetically over the ground found her as soon as she sent the request. She climbed in and sat down, the door merging back into the wall she had walked through.

“Coffee hangout,” she said, and the car, recalling the full address from her earlier requests, raised off the ground and rocketed towards the destination. Minutes later, she stepped out. On the inner edge of the door, a hand sanitizer dispenser with a smiling microbial mascot suggested she take some. Mars obliged, rubbing her hands together, straining against licking her palms and trying not to appear upset at the waste.

She dropped the empty container she had carried from home into one of the vaporizers that lined the sidewalk. Nobody she knew was at the hangout, but she already knew it was going to be empty. It was too early for coffee, but Mars had nothing better to do while she contemplated her problem. She had been sloppy the last few times she had been caught and everything, even her visi-contact searches, could give her away. The moment her coffee came, her inbox lit up.

Mars closed the chat window with a blink, ordered a coffee with extra calories, and concentrated on reading her feed. Message after message scrolled, most written in code.

Bears are coming back

(Not sure, but the central message was mixed in with the colons)

Mars almost squealed in delight. The three X’s meant it was alcohol, the beans coffee. Whoever it was probably had a stimulant ban placed on them by their parents and wanted to trade. A quick search on what perfume was confirmed it. Most perfumes, while not as palatable as the other things she had been drinking, contained sufficient alcohol to work up at least a minimal buzz. It wouldn’t be fun, but it would get the job done.

Mars ordered another cup of coffee, the strongest one she could, and minimally engaged the inquiring post. The response was instant, and the address was sent to Mars’s private inbox.

Mars stumbled out of the car and towards her home. Several hours had passed since she had traded the coffee for perfume and already she was swearing that she had finished her last drink. This stuff was ancient, several hundred years old in fact, and had hit her harder than she had ever been hit before. She had spent the day wandering around town, once even vomiting mostly in/onto a vaporizer. On a related note, Mars needed to have her jumpsuit cleaned. She could feel sticky spots of mess on her skin that were hidden by the perfect projectors on her dress, spots that still managed to smell nice even after being mixed with the contents of her stomach.

The light at the front door switched on, and she knew that her parents were waiting for her.

The door dilated open and Mars walked in. The dress melted away when the door shut, showing that there was a lot more on her jumpsuit than what had made it into the vaporizer.

“Mars, come here,” she heard a voice call her name. For them to use actual audible words and not send it through her visi-contacts was not a good sign.

They were waiting for her in the main room, a chair pulled out for her to sit in. Mars obliged without being asked, knowing what was coming next. Her stomach was tied in knots, her head was pounding, and they wouldn’t even need to run a bioscan to see what she had managed to get into that day.

As soon as she was still, her parents began to speak:

“We know about the hand sanitizer. And the perfume.”

Feeds projected on the wall, letting Mars know that she had not kept everything out of her line of sight.

“We are very disappointed in you Marisha, and really hoped you would not have violated our trust. You’re going to be grounded for the next month. Also, we’re switching to soap and water. It’s archaic, but it’ll get the job done. No friends for the month and your visi-contact use will be completely monitored. Finally, you will write and research a 10,000 word treatise on alcohol abuse, with another follow-up describing its ill effects on humanity throughout history. Do you have any questions for us?”

“Because you are our responsibility”

“And we’re the latest model of parents, designed to have the best interests at heart for our charges.”

“Not in the traditional sense, but we understand you better than you ever could. We were created for that purpose. Marisha, today you drank perfume. That scares us. Does it scare you?”

The words hung in the air. Marisha said nothing, which was enough for her parents.

“Then get some sleep. We love you.”

The lights in the house went dark, all but a path that led Mars to her room. She followed them. Lemonseed was quiet, but had left her bed ready, inflated to the level she liked most.

The last lights went out, and Mars fell onto the bed and shut her eyes. There were times she couldn’t stand her parents, but they were the ones she chose.

And she loved them.