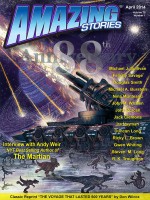 And welcome all to the first official new issue of that venerable title!

Back in the Fifties, Cold War era nuclear nightmare films were legion; Hollywood lore had us being subjected to the deprivations of a host of greatly enlarged creatures, from all manner of insects – scorpions, ants, bees, praying manti, tarantulas – straight on up through nearly every branch of the evolutionary tree – crustacea, fish, lizards, birds and culminating in – what else? –  giant people.

Many of these films employed a cheap, cliff hanger like end title:  the words “THE END” would appear and after a few seconds those words would be joined by a question mark.  The message of course was that we may have defeated the foe this time, but there were sure to be even more things frozen in those glaciers or buried deep beneath the sea that were just waiting for their own atomic alarm clocks to wake them up at the appointed hour.

It didn’t take long for those end titles to start getting old.  So film makers began playing around in an attempt to keep it fresh.  One memorable film (the title escapes me at the moment – an exercise for the reader) must have decided to go whole hog and covered all the bases with

Right now, Amazing Stories has arrived at the first portion of that phrase.  The 88th Anniversary issue marks the conclusion of our beginning phase:  in December 2012 we opened up our multi-author blog for beta testing.  In January of 2013 we opened our doors to the public and have been growing in community awareness, memberships and influence ever since.

Our blog, covering every aspect (we can think of) of the combined genres of science fiction, fantasy and horror (which carry a slew of sub-genres along on their coattails) has been contributed to by over 130 different contributors, ranging from fans to award winning authors, artists,  editors, and fellow travelers.  Our subjects run the gamut from film to comics, fandom, the pulps, television and film fare and the occasional odd interests that are part and parcel of the fan experience.

But our goal was not just to establish a popular genre-oriented blog.  Our goal has always been to return Amazing Stories to regular publication in a sustainable fashion.  To that end, we determined early on that in order to survive in today’s economy and meet our market’s demands, we needed to find non-traditional sources of revenue in addition to the traditional subscription and advertising model.

While the details will have to wait for a soon to be forthcoming series of press releases, the gist of it is that we’ve managed to achieve that goal.  The Experimenter Publishing Company is now in the process of licensing the Amazing Stories® brand into two different market segments – and has plans to expand that effort over the coming year. We have a great deal of confidence that the revenue from our licensing deals will provide the foundation of a steady revenue stream that will allow us to shortly begin publishing fiction on a regular basis, as well as support other necessary efforts such as promotion and the further development of our website.

THE END OF THE BEGINNING