The Boomers are OK: We had a chance to experience something completely out of reach to newer fans 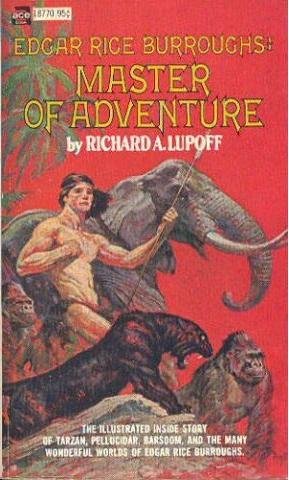 Richard A. Lupoff passed away the other day.  I first made his acquaintance through fanzines and his book: Edgar Rice Burroughs, Master of Adventure.  His own recounting of his origins as a Fan inspire me to this day:

“I discovered a subculture of people who valued the intellectual over the physical, ideas over objects, imagination over conformity, cooperation over competition.”

Thanks for everything, Richard.  We’ll see you on the Riverworld, by-and-by.

Lots of “my people” are dying off. (My people are my generation, the preceding generation and a handful of folks from the grandparent’s generation; this includes folks like H.G. Wells, everyone from the golden age of the genre/the greatest generation, etc: the people who created my surround as I came into this world and grew up.)

We’re experiencing a lot of dismissal and “ageism” (some of it admittedly justified, at least for those quarters where they refuse to get woke AND won’t STFU); you’ve heard it – “OK, Boomer”, “It’s another Karen”, and more extreme accusations – often based on an improper understanding or interpretation – like “Heinlein was a fascist (and therefore so is anyone who still reads and likes his works).”

I see it all the time when the youngsters who are jumping on the lawn (trampling the new seed, making bald spots, tearing out the roots with their plastic(!) Tonka Toys…but I digress) start trying to compare our science fiction – the authors, works, shows – to their science fiction, and find it wanting.

The characters sucked; the science was wrong; it’s the fever dreams of colonialism; there’s no diversity; the writing is pulpy; lacks representation…..

Sadly, in many respects, those accusations are true. But they miss one fundamental thing, something I and my cohorts had a chance to experience, a unique experience and one that I do not think has or can be replicated for the newer generations of fans (and one, I believe, that has contributed to the diversification – or dilution, YMMV – of the genre’s Fandom):

We got to experience this stuff for the first time. For the VERY first time. 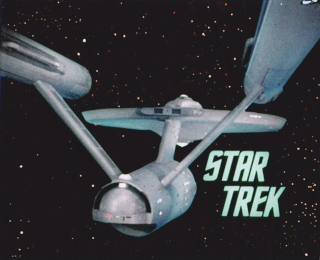 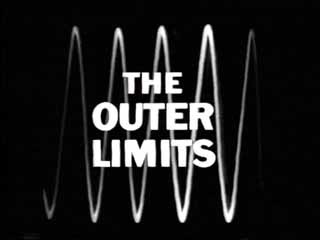 For better or worse (and deliberately utilizing 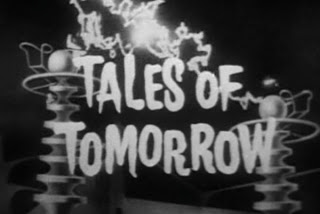 negative semantics to help make the point): everything most everyone is gushing about these days is derivative. Take any SF contemporary novel, TV show, film, comic or game and look down at its feet: they’re standing on very broad shoulders, and the feet below those shoulders are standing on even broader ones. It’s shoulders all the way down. 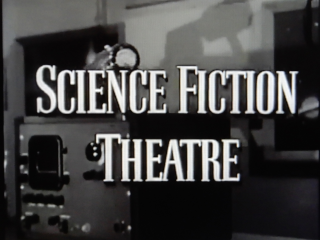 evolution is an additive, winnowing and improving process, but such comparisons are missing a fundamental, perhaps most important point, which is that our experience with the sense-of-wonder was at least one order of magnitude greater than any that have followed. 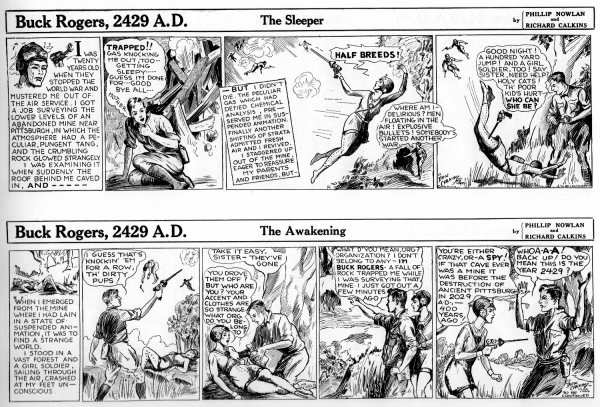 There’s simply no comparison between seeing a rocket, carrying a human being, lift off from the Earth for the very first time. Sure, first stages landing under their own rocket power is spectacular, but in another sense – been there, done that. Those watching launches now do so with the certain knowledge that it can be done, has been done. Back in 1957, no such certainty existed. Think about that: The Sputnik launch in 1957 – right up to the moment that it achieved (a decaying) orbit, the question of whether it could do so was as speculative as the possible working of the Alcubierre warp drive is today.

It’s the subtle, almost indistinguishable difference between “OMG! Will you look at that!” and “What will they think of next?” The former is an expression of shock, and awe and wonder. The latter, mere acknowledgement. The former, a horse being exposed to a horseless carriage for the first time, the latter, the discovery of a new color and scent for dishwashing detergent. Both can be interesting, thought-provoking, inspiring, and yet are completely different experiences emotionally.

So, when you bitch about Star Trek: The Original Series and the old has beens who still find it preferable to newer iterations; when you laugh at black and white films and their lack of CGI special effects; when you complain that golden age SF literature lacks this, or that or something else, keep in mind that you aren’t, and can never, experience those things the way that we did. Saying so doesn’t negate the valid criticisms, but it frequently does miss the point. 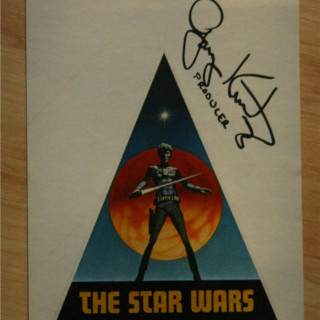 Take The Star Wars as an example.

Star Wars. (They dropped the “The” before final release.) The movie released in 1977 that featured the phrase “A long time ago in a galaxy far, far away…”.

Sure, I’ve grown to dislike it more and more with each passing year; sure it’s science fantasy, not science fiction; sure it’s a PERFECT example of the manifest destiny, western colonialism, white hetero male centric militaristic power fantasy trope (I mean, the good guys wear white and the bad guys wear black, come on! The MacGuffin is a freaking Princess! Come On!), but while true, none of those are the point.

The point is: when it first aired in May 1977 (I was there – sat through three showings back-to-back-to-back) No One In The ENTIRE World Had Ever Seen ANYTHING Like That.

When that John Williams fanfare blared across the theater and those giant yellow letters began to scroll up the screen, every single person in every single theater across the nation (and later the world) was in shock. Literal shock. Their hearts raced, their blood pressure dropped, they broke out into a cold sweat, their mouths hanging open and dry.

In the space of a mere handful of seconds, the entire world had changed. Snap! Just. Like. That.

There was the world that had been, where fantastical flights of fancy took place – with the exception of a handful of spaceship models on strings and iguanas with horns glued to their snouts – entirely inside one’s own head, and there was the world that was now, where others could contrive to actually show you what those fantasies looked like. 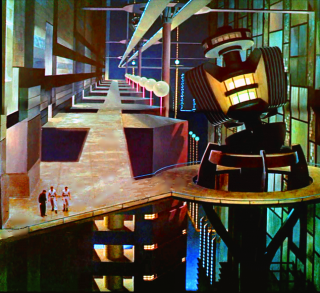 Well, they could show you what THEY thought those things looked like. Every director in Hollywood suddenly found that they had access to the Krell machinery from Forbidden Planet, and it worked a lot better for them than it had for Dr. Morbius – all he could conjure were giant footprints and fleeting, shifting, not fully formed outlines.

Previously to that time, when someone put the SF imaginings of an author on the screen and got it “wrong”, we could easily dismiss our disconnect by invoking bad special effects; we were trained to ignore the cheesey (my friends and I would chant “look at the strings! look at the strings!” during any bad SFX, whether it had strings or not, as a way of maintaining our suspension of disbelief).

Today, not so much. Today the goal seems not to be to supplement the viewer/reader’s own imagination so much as it is to force feed the creator’s own mental images into their heads. If, say, for example, some fan crew did a Star Trek film (two episodes of 15 minutes each:  Thanks, Axanar.  Not.) and used one of the original designs for the Enterprise, called it the Enterprise and suggested in their script that that version of the ship was THE version of the ship (everything else was alternate universe bullcrap that should be 1984ed from existence), well, they’d be calling a lot of ire down upon themselves because “everyone” “KNOWS” that that is not what the Enterprise looks like – even if Gene Roddenberry did consider that design. 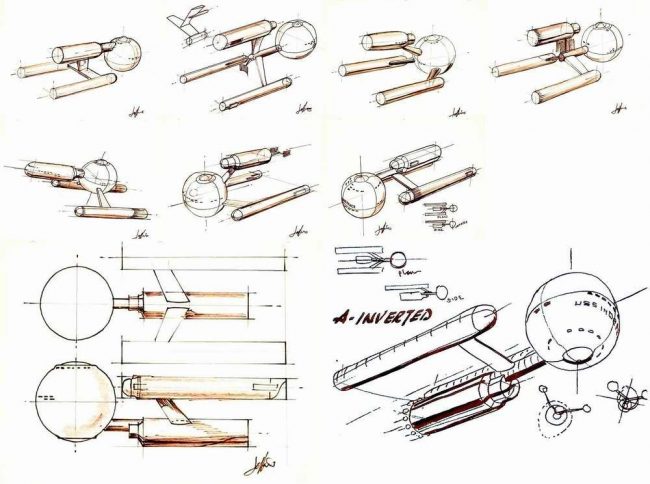 You see this in the internet fights over Klingon Foreheads; Star Trek timelines; the Martian War Machines in various WotW incarnations:
someone else’s imaginings have supplanted your own. You now think of their fantasy as your own fantasy, or you reject it and everything that went along with it because you can’t allow their vision to replace your own. You have lost something, because someone is stealing the imagination space inside your head.

So much so that we have modern audiences complaining that “LoTR is a ripoff of The Sword of Shannara”; “The Wolfman is a ripoff of Wolf”; “Ringworld is a ripoff of Halo”; “John Carter failed because so many stories are based on it that it could not be seen as original”; “the new Foundation series will have trouble distinguishing itself from Star Wars – which took so much of its imagery from the original” &c.

But back to Star Wars. I ask you, how could the experience of seeing any one of those films now, in an age when an unofficial holiday has been created for its initial release and you can’t go a single day without seeing some iconography from the series compare, in any fundamental way, to seeing the first film for the first time?

*(if you are a nitpicker or flyspecker, you will no doubt already know that these examples are not completely accurate: I have chosen to substitute the actual “firsts” for their more storied and familiar “most popular first example(s)” in order to provide those readers who do not have deep experience with the roots of the genre examples they may be familiar with.  So, for example, if the generation ship concept had been invoked, I might very well have mentioned Heinlein’s Universe as the example, while, in fact, the first fully developed generation ship story was The Voyage That Lasted 600 Years by Don Wilcox.)

**This missive may owe some of itself to the juxtaposition of “Boomer” in the generational sense and the fact that one of Richard Lupoff’s best known stories is With the Bentfin Boomer Boys on Little Old New Alabama, which appeared in Ellison’s Again, Dangerous Visions, inside my own head.

Updates on everything from reviews of our magazine to articles being submitted to other magazines and announcing our forthcoming SF Trivia Contest.

Thoughts on the winter/summer solstice.