NASA and SpaceX will launch the first crewed flight from Kennedy Space Center tomorrow, May 27, at 4:33 pm eastern time.

SpaceX’s Crew Dragon will carry two astronauts – Bob Behnken and Doug Hurley – to the ISS, and will achieve orbit atop SpaceX’s Falcon 9 rocket.

This will be the first US launch of a manned mission since the Shuttle program ended in August of 2011. 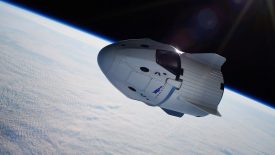 The Crew Dragon was developed as part of NASA’s return to space program involving private space companies like SpaceX.  Boeing has also developed a crew capsule, the Starliner.

Launch coverage no doubt will be wide spread (if weather doesn’t scrub the launch – there’s a distinct possibility) and can be seen on NASA TV and on the SpaceX website.

This is as close as we;ve come so far to the original SF concept of space flight – private entrepeneurs building one in their back yard and taking off for the cosmos.  True, it’s using a government launch pad and facilities, but the rocket, the capsule and even the spacesuits are private enterprise.

One Track Mind for Writing Tools and Apps

Yes. And there are men who might be with the CIA who can kill goats with their minds….