In this week’s viewing: Dr. Stone’s villains find an unpleasant way to fight, Kemono Michi is just unpleasant, and more! 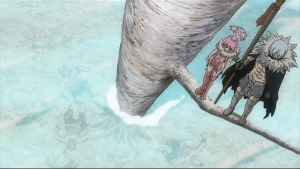 Dr. Stone #19 – The Empire of Might turns out not to be totally hopeless at strategy, as the whole business at the bridge is revealed to be a feint while someone else burns the village down. Still, the villagers are safe, the attacking force is diminished, and Senkū is all fired up about his next technological project, which is to figure out wireless telephony before Tsukasa gets serious about wiping him and his firends out.

Though Gen and Hyōga’s eyes, we get to see more of Tsukasa’s governing philosophy. His vision is of a world of equality and sharing, at least for those he considers deserving, the fit and healthy young. Those he considers undeserving need to be eradicated, except for a few disposable mooks kept around to serve as target practice. His beautiful new world also requires that there be no technological advancement, so Senkū and anyone associating with him are on the kill list.

In other words, the progressive island of science is facing a larger, more militarily inclined enemy, whose charismatic leader espouses collectivist values and is leading a youth movement to purge authority figures and intellectuals. Not that anyone should see any parallels with any real-world historical situations, especially not any that might spring to mind especially easily for the Japanese. Weekly Shonen Jump is merely an entertaining magazine for male adolescents; it surely would not want any of its properties getting, you know, political. 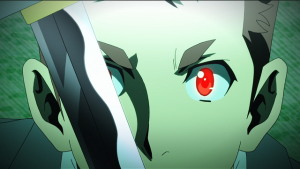 Special 7: Special Crime Investigation Unit #6 – Unit 7 moves in and disables the hostage-takers in its own inimitable style. Then the joke turns out to be on the amateur terrorists; instead of the specially chosen descendants of dragons, they’re the intended sacrifices. At which point things get a good deal more supernatural for both Nine and Unit 7.

For any viewers who hadn’t noticed Seiji’s unusual abilities by now, there it is, out in the open: He has some kind of magical power, and his boss knows it. And now all his co-workers know it. For those who are paying attention, note that the method by which one of the terrorists was convinced he had dragon ancestry was getting his leg slashed and magically healed— exactly what happened with Seiji in episode 2.

There turns out to be one more purpose to the mall attack. It gave Nine cover to destroy the fifth of six seals, which presumably are holding back something very, very bad. Like, say, a much less weak dragon. 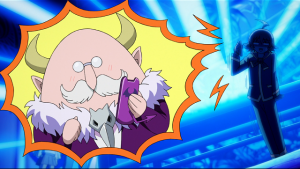 Welcome to Demon School! Iruma-kun #6 – Iruma’s attempts to look normal continue to fail in his first Herbology class, where he accidentally introduces an invasive plant to the demon world. It’s enough to reveal his identity to the student council president, but luckily she has a secret stash of shōjo (girls’) manga and a high susceptibility to suggestion.

Cherry trees have a special place both in Japan in general and school anime in particular. The Japanese school year begins in April, when the cherry trees are in bloom, and many, many, many a show has felt it necessary remind viewers of the fact. And in picnicking under the tree, the demon students are recreating the practice of hanami (flower viewing), where people all over Japan go out to celebrate the first cherry blossoms.

Speaking of old tropes, the girl rushing to school and colliding with the male lead is another one. In works aimed at girls, it certainly be the start of a romance. In works aimed at boys, it’s more a way of introducing a girl who’s going to be causing problems for the hero. Works either way, I suppose. 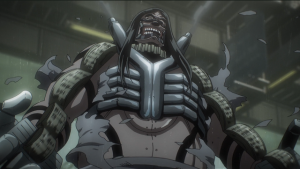 No Guns Life #5 – Faced with the prospect of a warm, familial moment, soured only by a very tired joke involving the trans landlady, Inui decides he’d rather sulk and then go get some personal hygiene taken care of. Then the government thugs turn up and haul everyone off, except they are not what they seem.

So that’s where all the extra characters in the opener have been hiding. Weird Headpiece Dude is another cyborg mechanic, Fancy Car Jerk manages a cyborg prison, and the woman who looked like the tragic love interest is actually a government official of considerable power. She can revoke Inui’s right to exist, but she’s just looking for his help capturing an escaped cyborg criminal.

The criminal himself has no role in the story beyond establishing the bind that the EMS finds itself in. Even they are beholden to Berühren, which keeps all the juciest technological secrets to itself. The government has to buy Berühren’s cooperation with a supply of criminals to experiment on, thus ensuring Berühren can keep its technological lead.

For a government which recently fought a war, it’s probably easy to agree to this deal: they’re criminals, so good riddance, right? The government is already inured to throwing away lives. In fact, in addition to orphans and criminals, I wonder if Berühren gets to pick up a few veterans, too. Inui might have been one of their specimens if things had turned out differently. 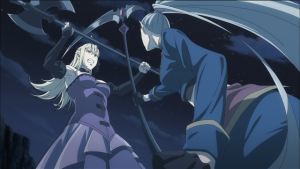 Kemono Michi: Rise Up #6 – The Ogre is ready to face his foe, albeit according to the rules— no foreign objects! Unfortunately for those eagerly awaiting the main event, this week is really all about Carmilla.

The big revelation about Carmilla is that, although she may seem kind of useless, she’s actually totally useless. And not a funny sort of useless either, just pathetically useless, with Hanako keeping her around out of pity.

This was probably supposed to make her more sympathetic, but all it’s done is make her harder to laugh at. It’s fair to say at this point that Kemono Michi is funny only when dealing in some way with animals or wrestling. Please let it get back to those soon.