Pimp My Airship by Maurice Broaddus tells a beautiful story filled with mystery and wonder and just enough Steampunk elements to satisfy the hardened fan.

Most readers of Steampunk are familiar with the alternative Victorian era setting saturated in mechanically enhanced gadgetry, out of place technology, and sophisticated fashions. Unfortunately, these elements have a tendency to become distracting shiny new things that can overshadow a brilliant story. 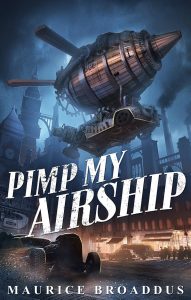 But in the right circumstances, some or all of these elements can become a cohesive tapestry of art and literature. Taking readers on a fast-paced journey like no other, Pimp My Airship by Maurice Broaddus from Apex Book Company tells a provocative story filled with mystery and wonder and just enough Steampunk elements to satisfy the hardened fan.

Hubert “Sleepy” Marcellous Nixon is a steam technician living in Indianapolis. Prided with success through his hard work and determination, he has risen to a lifestyle of comfort above his upbringing that allows him to express himself through his poetry at the local, yet no-so legal, clubs. As much as society wants to believe it has risen above discrimination, there is still an obvious segregation of class that impedes the freedoms of many. And many of those in power would like to keep it that way.

One fateful evening when Sleepy is performing, he bumps into an eccentric gentleman named Carlton “(120 Degrees of) Knowledge Allah” Drayton who unexpectedly drags him into a dark web of corruption and deceit he could never have imagined. Throw in the troubled heiress Sophine Jefferson, whose father was murdered, and the danger has magnified as this odd trio now race for answers, and their lives.

The story begins at a crawl that may turn some readers away. But the brilliantly painted cast is so enticing that you can’t help but stick with it. The investment of time is most rewarding to readers as they are allowed to grow with the characters rather than be told who to like or dislike. Set in a world not so different than our own, but obvious oddities to give it just enough allure of past, present and future, the ever-evolving characters are well developed and identifiable. As the plot builds and the pace quickens, so does our admiration for our heroes – and disdain for those who get in their way.

Pimp My Airship is unlike the archetypical Steampunk most of us are used to. The world Maurice Broaddus created may fill us with the expected shock and curiosity, but it is through his well carved characters who introduce us this unique culture of division that keeps the gears turning. It is an enjoyable journey that leaves you wondering where the author will take us next.

In this week’s viewing: JoJo and Cute High deal with defectors, Yona contends with a reluctant dragon, and more!

Glowing contact lenses could be the key to stopping diabetic blindness