If you are looking for an American Civil War alternate history that rejects the old cliches and shines a light on some of the darker aspects of American culture, then you can’t go wrong with Underground Airlines. 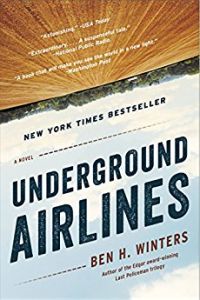 The nominees for the next round of the Sidewise Awards have been announced, so its that time again to review the finalists. I already discussed some of the short fiction finalists with my reviews on “Pirate Utopia” by Bruce Sterling, What Ifs of Jewish History: From Abraham to Zionism edited by Gavriel D. Rosenfeld and Tales From Alternate Earths; but now I think its time to tackle the rest of the finalists and I want to begin with one of the long form nominees: Underground Airlines by Ben Winters.

Our story is set in an alternate history where president-elect Abraham Lincoln is assassinated in 1861. The sudden and violent death of an American president puts the breaks on the secession crisis and a last minute compromise is drafted which prevents the American Civil War from breaking out as it did in our timeline, but also prevents the federal government from doing anything to outlaw slavery in those states where it is still legal.

Flash forward to the present day and slavery continues to exist in four states (Louisiana, Mississippi, Alabama and Carolina) known as the “Hard Four”. Plantations have been transformed into multi-national corporations and slaves are now given the more politically correct term of “Person Bound to Labor” (or PBs or peebs). Fugitive slaves are tracked down by the US Marshals who work to prevent the “Underground Airlines” from smuggling black slaves out of the country. The United States is the midst of an economic recession, due to all of the countries who refuse to trade with a nation that profits from slavery, but things are starting to improve due to all of the economies in the developing world who don’t have such moral hangups.

Our protagonist is “Victor” although we learn quickly that isn’t his real name. He is a former PB who fled slavery, but was recaptured by the US Marshals. Instead of being returned to his plantation, however, he is given the option of working for them by helping them find fugitive slaves because very few law enforcement agencies are willing to work with the US Marshals. Thus given a choice that really isn’t a choice at all, Victor accepts and a tracking device is inserted into his spine so he can’t run. Victor soon proves very good at his job, but when he is tasked with tracking down a fugitive in Indianapolis by the name of Jackdaw, Victor realizes something is wrong with this particular assignment and he may just be able to exploit it to get his freedom once and for all.

Underground Airlines managed to be both thought-provoking and plausible, which is hard for a mainstream work of alternate history to do. Most American Civil War alternate historians that feature slavery continuing in America, usually because the Confederacy wins the war, still have slavery ending sometime in the late 19th century by arguing “it was going to end anyway”. This same argument is found in one of the best counterfactual histories on such a scenario, The Confederate States of America by Roger L. Ransom, but Winters subverts it with Underground Airlines.

Winter’s undivided America has, in an effort to preserve the Union and prevent war between the states, found ways to justify the enslavement of millions of humans because they have become economically dependent on the wealth the Hard Four produces for them (since they don’t have labor costs to worry about). Even the international community refusing to trade with the United States seems to produce the opposite effect within America by turning it into an us vs. them battle over American “traditions”. Thus Underground Airlines comes off as a more plausible version of SM Stirling’s Draka books because it shows how American civilization could have gone down a darker path if just a few key events were changed. Thus you have a global power that still remains wealthy despite its reliance on slavery.

That is not to say everything about the Underground Airlines is plausible. The state of “Carolina” exists because North and South Carolina decided to unite, but it’s never explained in the book why they did that and it doesn’t make much sense once you think about it (for example, it would mean two less senators for the slave states in Congress). Several famous people make cameos throughout the book (including Harry Truman, LBJ, Martin Luther King Jr. and Michael Jackson) despite the fact that with a point of divergence in the 1860s none of those people should even be alive.

Of course, those are nitpicks. Overall, I still feel Underground Airlines did a great job of showing an America that is becoming increasingly isolated from the world because of its refusal to give up on slavery. Its an America where negative attitudes on race have become enshrined in the Constitution. Even the ways America keeps tabs on both the free and slave black populations, seem eerily familiar when you think about modern police brutality or prison labor, but its just on a grander scale.

And yet…I can’t leave this review without addressing a major controversy regarding Underground Airlines. As some of you may know, the author, Ben Winters, is white and the main character, Victor, is black. When this book was first published, Winters was praised by the New York Times as being “fearless” for being “a white writer going after questions of what it’s like to be black in America.” This, understandably, pissed a lot of people off. Why was a white writer being praised for tackling issues of race in America, while black writers who do the same thing are either ignored or even attacked for hating America?

To Winters’ credit, I don’t think he was trying to downplay the work of African-American writers in science fiction or other genres. In fact, throughout the book, Victor mentions something called the “Mockingbird effect” or the tendency of white abolitionists to believe that only they can save blacks, because they obviously can’t do it themselves. By bringing this up, I think Winters was admitting that by attempting to address racism, he could easily screw it up by his own lack of experience with it. By acknowledging that the Mockingbird effect existed, he was trying to tell us that he wants to avoid falling into the same trap.

Nevertheless, I am not going to deny that its still a controversial story to tell…but I don’t condemn Winters for trying to do it. Science fiction as a whole (or any literary genre) wouldn’t exist if people didn’t write about things they didn’t know anything about from direct personal experience. Tackling difficult issues shouldn’t be limited to one’s race, ethnicity, religion, sexual orientation, etc. Although people might disagree with me, as long as you approach it with an open mind, a willingness to learn and a promise to not simply rely on your general assumptions about people; you could write a good story and maybe even create some discussion. I think Winters managed to do just that with Underground Airlines.

If you are looking for an American Civil War alternate history that rejects the old cliches and shines a light on some of the darker aspects of American culture, then you can’t go wrong with Underground Airlines. Will it win this year’s Sidewise Awards? Well we still have a couple more books to read…

Hello folks! And welcome to my little spot on the interwebs. Thanks for joining me! April is National Poetry Month (in the USA). I wish it weren’t always in April. This is a very busy time of year for me as a singer (I usually sing concerts before and/or after Easter) and for my family. […]

Write About What You Know