Form a band of gnomes to battle for lawn supremacy in the game Battle Gnomes!

In contrast to the old adage, the grass isn’t always greener on the other side. Battle Gnomes is the perfect testament to that. This kid friendly family card game, from Branum Games, has you forming a band of gnomes and arming them against your neighbors. With various lawn decorations, ingenious contraptions, and unique gnomes, you fight for control of the neighborhood; taking defeated gnomes as victory points. May the battle for lawn supremacy commence and may the best yard win! 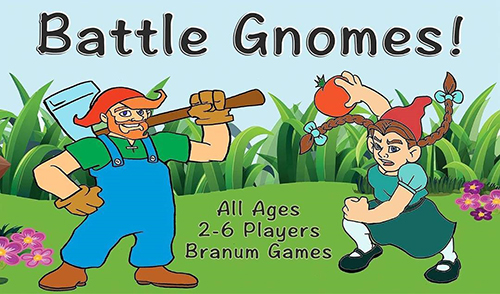 I had the pleasure of trying out this game, first-hand, some time ago. The game demo just happened to appear shortly after I had gotten a new, functioning powered wheelchair and the game shop was within my average driving distance. It would have been a shame to pass up the opportunity, and I was not disappointed. Usually, I find it difficult to play well in a skill-based game on the first go. I prefer to enjoy a few rounds to really get a feel for the strategy and mechanics. 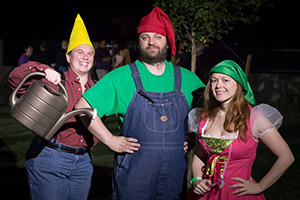 Yet, we had an appointed Game Master sitting by us who would suggest helpful tips now and again. After what some would call a strong start, I started to flounder as I was starved of any accessories to aid my gnomes. The thought of engaging in any battle with my team was laughable at best. So, doing the only logical thing I could think of, I changed my goal from winning to deciding the victor.

Alliances were made, then broken. Eventually, I wasn’t the only player considering skewing the outcome of the game. Despite being behind on victory points, all the players had managed their teams to hold their own against an attack. Though the game slowed down, everyone was in a position to keep the others from the last few winning points. It was the miscalculation of the other players that gave me a couple points more than they intended and crowning me as the victor.

In total, the game lasted around 2 hours due to everyone hoarding their action cards for the final battle that would give them the winning advantage. No matter how hard we fought to give our chosen player an edge or inch ourselves closer to winning, though, everyone had a good laugh. In my experience, Battle Gnomes is a perfect Saturday night game (or any game night) that facilitates great conversation by not being overly complex while still being mentally stimulating for the more strategic gamer.

So where can you get a copy of Battle Gnomes? Just recently, Branum Games has launched their Kickstarter campaign and has reached $3,844 of their $7,000 goal at the time of writing this. This Kickstarter will be open until October 6th, 2016 and for those backing the project to receive a copy of the game, the estimated delivery if February 2017.

For Readers Who Can’t Get Enough of Shannara

Blueprint for a Battlestar by Rod Pyle

PAY NO ATTENTION TO THAT SAD PUPPY BEHIND THE CURTAIN: IT’S TIME TO HUGO NOMINATE!