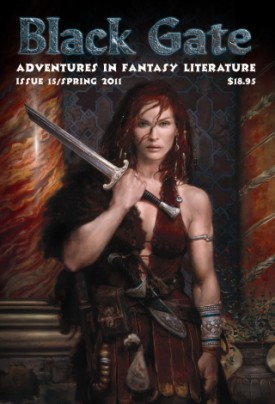 A couple of days ago, John O’Neil, editor of Black Gate magazine (a publication I highly respect) announced the Hugo Awards final ballot, along with some commentary on the SP controversy.

Black Gate magazine made the final ballot for Best Fanzine (congratulations!) – but was unfortunately included on the RP slate and was therefore moved below “No Award” by many who will be voting this year.  (No Award gives voters the option to register a “no” vote for both individual works and for entire categories.  Many voters are planning to place any work appearing on a slate off their ballots or below No Award in the rankings in order to register a vote against voting slates and organized block voting.)

In short, the Hugo ballot this year was essentially dictated by two individuals who asked their followers to vote for their suggested candidates, regardless of what they actually thought was deserving.

In related news, Black Gate, which was not included in the Sad Puppies slate but was part of Rabid Puppies, received its first Hugo nomination this year. We were not informed of our inclusion, and only found about it after we were contacted by the Sasquan awards committee last week. Black Gate blogger Matthew David Surridge, who found himself in a similar situation when he received a nomination as a result of being listed on both slates, discussed the reasons he declined the nomination here yesterday, in his lengthy article A Detailed Explanation.

Since the Black Gate nomination was for the entire site (which is run by a group of nearly 40 volunteers, many of whom are thrilled by the nomination), we did not decline. That’s a choice that will doubtless expose us to some (perhaps deserved) criticism. I’ll have more to say about all this later.

For now, I’ll just say that I think that an organized campaign to bring new fans into the voting process, while simultaneously urging them NOT to read broadly and make up their own minds, is a Spectacularly Bad Idea. Among other things, it badly damages the Puppies’ cause.  John O’Neill, Black Gate Magazine (emphasis added.)

the comments begin and down at the bottom, in responding to one comment, John has his more to say:

Again, your assumption is based on a major misconception. There is no “other side.” There is only you, raging against a sea change in Hugo readership that you can only rationally explain by imagining some sinister secret cabal unjustly keeping deserving white males off that ballot.

The other side doesn’t exist. There are only some 10,000+ Worldcon attendees, all of whom must now make their own decision, to vote as they see just and fair.

You’re welcome to draw your own conclusions. Me, I look at how the Sad Puppy slate was treated last year, and I draw a pretty obvious conclusion… Hugo voters, all on their own and without any SJW slate to guide them, will vote “No Award” across the board.

I won’t be attending. But if I were, I would vote “No Award” — including for Best Fanzine, the slot Black Gate is in. I would do the same regardless of who made this dubious “accomplishment.”

I think what you’ve done sets a dangerous precedent that could spell the end of the awards if it’s not quashed immediately, and I feel strongly enough about that that I would be willing to burn a Hugo Award for Black Gate to send that message.  (emphasis added)

Well.  Another SP/RP nomination that has placed the nominee between a rock and a Hugo place.  I completely understand John’s position in not refusing the nomination;  as he says in his piece, there are over 40 people involved with Black Gate and the nomination is for ALL of them.  Very few of whom, I suspect, have little to no involvement with the politics surrounding this situation.

But I’m equally impressed by the way that John has threaded the needle.  He’ll accept the nomination and, if he were voting, would vote his own publication below No Award.  And he has said so publicly.

You all know how I’m voting already.  It falls in line with John’s example.  I’m voting against slates & organized campaigning for the Hugo Awards.  Those works that aren’t on slates will get due consideration.  I’ll have the packet and so will be looking at everything, but instead of being able to vote the way I usually do, I’ve been placed into the position where I really only have one valid recourse.

O’Neill’s statement is, I think, the perfect exemplar of just how badly the voting slates have screwed with everything this year.  What other example do you need than a fanzine editor voting his own fanzine below No Award?

Some thoughts on Hugo Kerfuffle 2015

Check out the latest from that hive of scum and villainy!