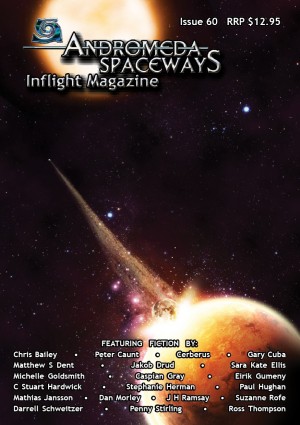 I’m quite pleased to report that ANDROMEDA SPACEWAYS INFLIGHT MAGAZINE, an Australian publication of no small import, has publicly disassociated itself with the Sad Puppies voting slate.

On their own website and In comments on both SF Signal and John Scalzi’s Whatever blog, representatives of the magazine had this to say:

We would like to state from the outset that we have never been contacted by anyone to let us know that we were listed on the Sad Puppies slate, and nor were we ever asked if we wanted to be on it (or given a chance to remove ourselves). We would have removed ourselves if offered the chance.  (Emphasis added.) (Full statement here.)

On Good Friday, one of our members discovered that we had been nominated by a group of American right wingers of whom we had never heard and that there was a quarrel going on about it in US fandom. And more recently, these nutcases have insisted that they told everyone they nominated and gave them the chance to withdraw. Untrue! If they had asked us we would have told them to get lost.

So, I am saying here and now, we have no connection with them and have not been asked if we wanted to be on their slate. Not ever. (Sue Burstzynski SF Signal)

What irks me about this, as one of the Andromeda Spaceways Inflight Magazine minions (and no, we weren’t asked, no, we weren’t alerted, no, there wasn’t any point in seeking to get ourselves off the slate by the late date that we did become aware of its existence), is that what should be a career-defining highlight in the history of the ‘zine, a Hugo nom, has very much morphed into something of a poisoned chalice. Win or lose, the taint remains; and we honestly did nothing to earn it, did not know of it until it was much too late. (Simon Petrie on Whatever)

Cudos also to Matthew David Surridge who withdrew from consideration for Best Fan Writer once he became aware that he was on the slate.  His reasons for doing so are not a direct statement regarding slates/no slates, but well-reasoned and appropriate nonetheless.

Both Andromeda and Surridge’s responses directly bring into question the statement by the SP’s that they contacted everyone who was to be included on their slate and received no objections – implying that everyone so included was on the list out of deliberate choice.

We now know that there were at least two that A:  did not want to be included on the list and B: were not given the opportunity to make that decision.  (Complete speculation, but I wonder if the attempts to contact people who were to be included stopped after the first two responses were “hell no!”.)

That there were some originally included who declined is also known: “Actually, Sad Puppies 3 did contact the majority of its proto-participants, to see who would or would not like to participate officially. I think we had a few who got missed — understandable, considering the volume of names and e-mails flying around in January. A few people turned us down. Only two got put on the list without an explicit ‘yes’ (by accident) and were removed when they asked to be removed; without rancor.”  Brad Torgeson on Making Light

A few conclusions (that are admittedly influenced by weekend reads of various blogs & websites by various authors and related types):  first – most of the SP nominees are happy to have been included on the slate.  Some even go so far as to explicitly endorse the various justifications for it.  A few remain silent or relate to their inclusion by way of “thanks for the pr”.  However, in light of the withdrawals and the requests to not be included prior to the slate’s publication, it wouldn’t be wrong to speculate that at least a few intended nominees were originally included not because of their ideological affiliations (which they apparently don’t share) but in order to make the list more palatable and, possibly, as a deliberate attempt to forestall No Award voting.  Discussion on the web seems to indicate that this particular effort has failed;  I’m reading a lot of comments stating that voters are not happy with having to down vote particular works, but that they’re going to anyway.  Some also are reserving to themselves the right to make an exception here and there (which is of course their right).

I’m thinking of writing to the studio and asking them to review the situation and might not perhaps see their way towards disavowing their film’s inclusion.  But I’m also pretty sure that the response I’ll get back (if any) would be “we don’t get involved in fandom’s politics” (and arguments to the contrary – that they’re already involved whether they want to be or not – will go unheeded.  Nice to have a Hugo – but it doesn’t steer the ship).

So it looks like I’ll be leaving GotG off my ballot.

I’m also happy to report that at least one proposed change to the WSFS Constitution (the doc that includes the rules of the Hugos) will be proposed this year.  Basically, the idea is to lessen the number of nominations and individual can make (in each category) and increase the number of finalists.  This presumably will lessen the ability of block voting to fill a category with their nominations alone.  I think it might work, but I also think that the SPs are fully capable of bussing in more voters.  Current estimates (derived from nomination counts & “statistics”) suggest that the SP slate brought in somewhere between 199 and 250 nominators, who might not have voted otherwise.  Which is an impressive number if correct.

Which makes it all that much more important to register our rejection of voting slates as strongly as we possibly can, from now until at least the rules changes are implemented.

And, to (happily) belabor the point, I WILL be seriously considering Andromeda Spaceways Inflight Magazine for Best Semi Prozine.

According to the Hugo Awards website, live text coverage of the Retrospective Hugo Awards will being in apprroximately two hours from now – or apprimately 3:00 PM EDT. Visit The Hugo Awards for more details. We’ll be following along and updating the list below with the winners as they are announced. Winner’s in Bold Best […]