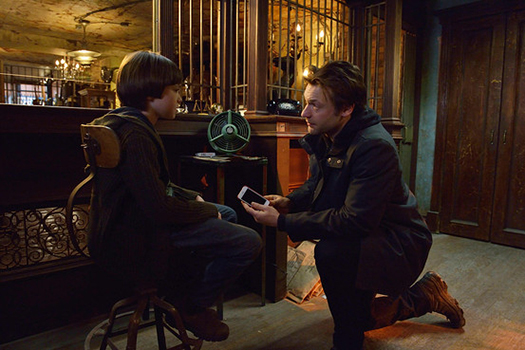 Pathetic doesn’t quite mean what most people think it means. Yes, it does mean someone or something that you pity, but there’s another shade of meaning to the word that stretches back to the theaters of ancient Greece. In that meaning, “pathos” connotes, among other things, experience and emotion (as per Merriam Webster), be they positive or negative. Pathos is the thing, said the Greeks, that causes the audience to invest themselves in a story, the thing that moves them.

Pathos also has an antonym, used even less than pathos’ classical definition: bathos. Bathos, according to MW, is the word for the thing that ruins a story, for “exceptional commonplaceness” and “insincere or overdone pathos.”

Guess which word best describes “Loved Ones,” this week’s episode of The Strain?

This week, we learn the predictable, not-quite-interesting, bathetic fate of Ephraim Goodweather’s ex-wife, Kelly. Spoiler alert: she’s a vampire (we’ll just have to wait and see on my post-episode-2 bet that their son, Zach, will also become a vampire).

This episode is almost interesting—actress Natalie Brown’s mannerisms after he transformation are suitably feral and creepy; her vampirized, Predator-style view of people is cool; being able to hear The Master call to her is a nice effect. But it doesn’t quite add up. There’s no tension in the episode, no excitement. Instead, we follow her through her day, through her fight with and infection by her boyfriend (that infection—worm through the eye—is one of the episode’s only unalloyed positives), through her transformation and first kills, all the way to her personal audience with The Master. But all of these events unfold in just the way you’d expect, with no real tension—she’s obviously going to become a vampire—and no real surprises.

The core idea is strong: follow a character from their start as a normal human being through their descent into horror and finally to their flowering as a monster. It’s same idea as behind the 2013 movie Contracted (in that case, though, the monster isn’t a vampire, but a zombie). But in both cases, the characters and the journey that they go on simply aren’t enough to generate the pathos needed in the audience for the final transformation into monster to pack the wallop it should.

Perhaps if the series has devoted more time to Kelly we’d feel her tragedy more acutely. But she hasn’t even risen to a second-tier character, so how could we be invested in her? There’s a flashback to Zach’s birthday and a surprise bike, but isn’t that sort of thing, that transparent and clumsy attempt to pull heart strings to generate sympathy for a character that’s been mostly ignored so far, precisely “insincere and overdone pathos”?