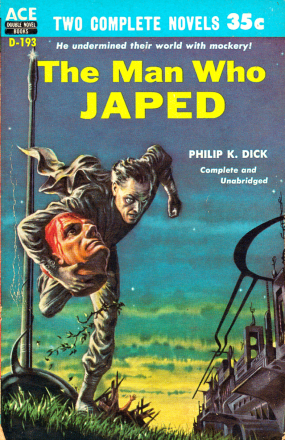 It all started in April 1971 at the first Vancouver SF Convention (VCON 1)… on the first night in the party suite we had an informal discussion about ‘favourite authors.’ Phil Dick’s name came up several times and the remark was made by Frank Denton of Seattle that Dick was an author who apparently shunned fandom. The seed was planted. We thought that because Dick was highly thought of by many fans, including myself… his presence at our next convention would help make the convention a success…”

When Philip K. Dick was invited to be Guest of Honour for VCON 2 none of the organizers knew he was on the verge of a complete mental breakdown. However initial correspondence raised suspicions:

Before he came he wrote some personal letters and we were a little apprehensive about what to expect when he arrived. We worried a little about drugs also…”

For one thing, his house had been ransacked three months earlier, as described by Dick in an article sent to Mike Bailey after the convention:

“the vast robbery and looting of my house a year ago in San Rafael, which caused me to move out of the United States while I thought it over. I came home one evening and found rubble and ruin, my locked files blown open, papers of every sort gone, stereo gone, virtually everything gone, windows and doors smashed. To this day I don’t know who did it. Robbery was not the motive; too many valueless items were taken, too much care to take correspondence and business records… the police to a certain extant favored the theory that I had done it myself. I didn’t. I to a certain extant favored the theory that they had done it…”

And the bank was about to foreclose on his house (which happened while he was visiting Vancouver). No wonder the thought of an all-expenses paid trip appealed to him. 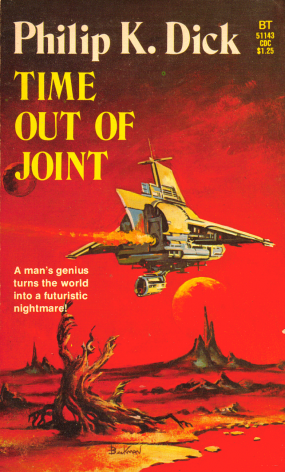 When he arrived on Wednesday, February 16th, 1972, we were pleasantly surprised by his turned-on, humorous manner. He flew in at night and he was such a whirlwind that within a couple of hours we had checked into the hotel and visited a downtown cabaret…”

However, Mike was a bit worried to hear Dick declare during a quiet moment “that he felt he didn’t have long to live, and would never write another book.” This was not quite the sort of upbeat, exciting guest the local fans had been looking forward to.

Yet Dick seemed to perk up the next day when:

the University English Department held a luncheon on his behalf in the University of B.C. Faculty Club (very high class), and afterwards he gave his convention speech THE ANDROID AND THE HUMAN in a large, filled lecture hall. It was very well received…”

Stan Hyde recalls that years later, while sitting in Susan Wood’s office at UBC discussing SF, another Professor (who’d attended the faculty luncheon for Dick) walked in and asked:

Whatever happened to that wonderful man, Phillip K. Dick? You know, he was his own worst enemy.”

Yep, that’s Dick in a nutshell.

For example, though his listeners had no idea, his speech was a personal disaster. He had originally planned to have Kathy—his lover since his 1970 divorce—seated beside him, but unfortunately she tore up her plane ticket and refused to come.

Kathy had been so important to his plans that before arriving in Vancouver he sent a press release to The Vancouver Province Newspaper which read in part:

“He is currently working day and night on his new novel simply called KATHY, named after the girl he is bringing with him to the Vancouver science Fiction Convention on February 18th… The novel really does not exist as yet, except in his head, but Kathy does, and he hopes the people at the convention will welcome her and like her…” 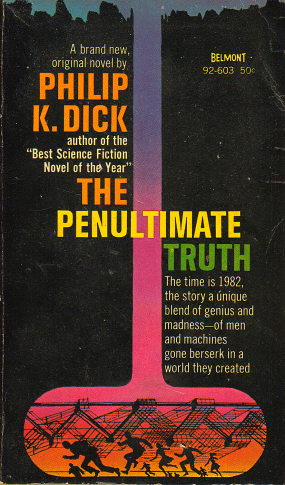 Dick was extremely disappointed and depressed Kathy had decided not to come and be with him when he gave his speech:

“It almost killed me, though, to be in a strange country without friends, without her specifically… I couldn’t stand to realize that she hadn’t heard me give the speech about her, since it was in the speech that I developed my concept of the authentic person that so clearly described her…”

Dick hid his hurt well. According to Mike Bailey, immediately after Dick’s lecture:

We went to the Graduate Student Centre and had a round-table discussion which was supposed to be a radio interview. But Phil completely befuddled the interviewer. For example, just as a tape ran off the machine, Phil held up his hand and exclaimed that he had just figured out how to express all his philosophy in one sentence. The announcer scrambled to get a new tape onto his machine, and didn’t realize he had been taken till we all started laughing…”

At the convention itself, the following day, Friday, February 18th, Dick astonished Bailey, and damn near everybody else, with his mad energy. He apparently mingled enthusiastically, with particular emphasis on women:

“I met a little black-haired chick named Janis the first five minutes of the Con, and fell madly in love with her…”

Local fans were delighted with his level of interaction with them, and responded accordingly. As Province Newspaper movie critic Michael Walsh explained when I interviewed him in 1994:

“There was a certain dynamism. A bear-like presence with a beard—in a ratty trench coat. Walk in some place where you are greeted jovially as Dick was at this convention and you’ll respond to the general level of good will in a room. It never occurred to me that he wasn’t doing anything other than reflecting back the good will he was getting from people who were really happy to get somebody with his reputation right here in Vancouver saying things that were, in their way, extremely his ideas, highly unconventional, in what at the time I regarded as a sort of Marshal McLuhan manner.”

Before the first day of the convention was over Dick announced he was going to live in Vancouver from then on. This made for the following headline in the Vancouver Province “CANADA GAINS A NOTED SCIENCE FICTION WRITER.” One possible explanation for his apparent outpouring of energy and enthusiasm was the impression of some fans that he was high on speed, an assertion somewhat contradicted by Walsh’s later observation:

“He was constantly snorting what he purported to be snuff. To this day I’ve got no reason to believe otherwise.” 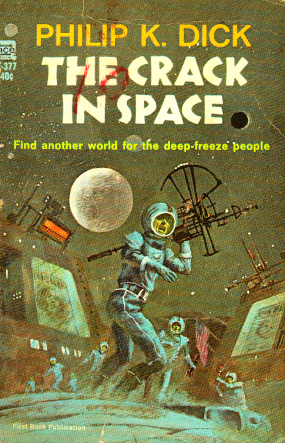 American fan Mike Horvat introduced Dick for his keynote speech (repeating THE ANDROID AND THE HUMAN previously given the day before at UBC).

The basic idea in Dick’s talk was, instead of studying machines to gain insight into human behaviour as scientists currently do, why not study humans to gain insight into machine behaviour? This in order to understand the difference between human and non-human in human beings. He argued that much human behaviour was already non-human, that government now possessed the science of “inauthentic human activity,” and that if totalitarianism is to be avoided:

“the ethics most important for the survival of the true, human individual would be: cheat, lie, evade, fake it, be elsewhere, forge documents, build improved electronic gadgets in your garage that’ll outwit the gadgets used by the authorities…”

In other words, typical Dickian thinking. One gathers that, were he alive—he died March 2nd, 1982—he would be entranced by today’s computer hackers.

As to Philip K. Dick’s state of mind after the convention, Michael Walsh commented:

“Following that particular VCON I rashly invited the Guest of Honour, Philip K. Dick, to put up in my own home until such time as he could find himself his own digs. Frankly, I thought, hey, this is a genuine story and perhaps, having been the guy to break the story there might be a useful follow-up. And besides, it seemed like the hospitable thing to do for someone so obviously keen on our country and our city, and that was the beginning of an interesting encounter of the third kind.”

I can’t pretend to have any profound insight into what made him tick. Dick lived in alternate reality. He was in touch with voices all his own, and it was hard to know at any given time exactly which of his many realities he was connected to. There was no sense of being in touch with the person so much as the personality. More and more you had to wonder whether or not it was a personality that you wanted to spend a whole lot of time with. 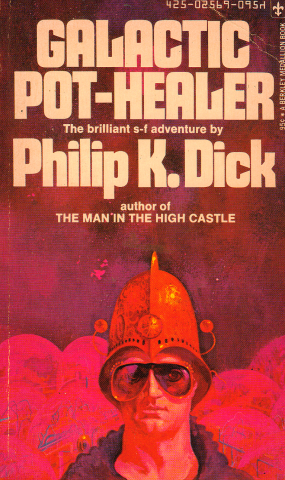 “Here’s an example. I have a phonograph record on which Marshal McLuhan put together music, bits and pieces of dialogue and assorted sound effects jumbled together that was supposed to give you some sense of McLuhan’s thoughts on how the media work, and worked us over, as he would say. Well, we started playing this for Dick because we thought it would be the sort of thing he’d enjoy, and all of a sudden he started yelling ‘Turn it off! Turn it off! It sounds like the inside of my head!’”

There was something scary about his detachment from what we think of the real world. It’s a detachment that I thoroughly enjoy, briefly, in a controlled situation like the movies. I find it very difficult living in a world where everyone was like Philip K. Dick, which is the kind of world he created in his fiction. It would appear that what he was writing about was very much his take on the world around him.

“He could give speeches, exciting stuff, heady stuff, give you a little bit of an intellectual high, and that I appreciated. At close quarters on the other hand, it was too impersonal tracking ideas with him. He could put across with enthusiasm, but as soon as you tried to engage him in conversation about those ideas, he took that as a challenge, and rather than respond in a dialogue his tendency was to wig off into what I suppose was a kind of defensive manoeuvre; he put on a performance that precluded any kind of debate or discussion. I didn’t like that. I really didn’t. I wanted to talk to the guy. I couldn’t. He couldn’t. I don’t know if anyone could.”

“There was a superficiality and a degree of maliciousness that was not endearing. I was happy as hell when he did move out. Because it was getting a little tense.”

I wouldn’t jump to any kind of conclusion, on the basis of the very little contact I had. All I can tell you is the reaction I had to what he did, rather than why he did what he did. It’s the reporter in me. You gotta be accurate… Uh, okay… the guy was a nut. But what kind of nut I don’t know.”

Definitely an alien being was Mr. Dick.” 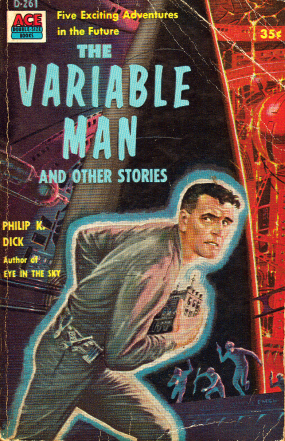 After two weeks Michael Walsh asked him to leave. Dick found a suite on Cornwall Avenue overlooking Kitsilano Beach. Soon after Janis broke off their relationship and left the city.

Dick tried to kill himself on March 23rd, 1972, by ingesting 700 mg of potassium bromide, a sedative. Then he changed his mind and phoned the BC Crisis Centre for help. He wound up in a drug and alcohol rehabilitation centre called X-Kalay where a combination of intense therapy and supervised activity pulled him out of his depression. In late April he flew back to California.

I think it would be fair to say that Philip K. Dick underwent in Vancouver nothing less than a cathartic experience which exorcised many of his personal demons. So much so that afterwards—in letters to Mike Bailey—he often referred to Vancouver with something approaching fondness.