Sword and sorcery has gone through some lean decades since the boom of the 70s and early 80s, but things have been turning around in recent years 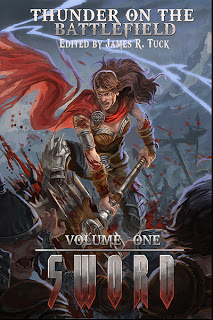 Sword and sorcery has gone through some lean decades since the boom of the 70s and early 80s, but things have been turning around in recent years. If anything, interest in sword and sorcery seems to still be one the increase. A good example is the two volume anthology we’ll be looking at this week and next week.

Many anthologies that are published electronically only contain a handful of stories. Thunder on the Battlefield is divided into two parts, the first labeled Sword and the second labeled Sorcery. Each volume contains a dozen stories. One of the things that hurt S&S during the last boom was that in an effort to ride the wave, publishers flooded the market with third rate products. Indeed, this is what causes the end of most subgenre booms in the publishing world, (although there are couple that seem to show no sign of ending at the moment, more’s the pity.) So far I’ve not noticed a flood of inferior novels and stories in the sword and sorcery subgenre.

Which brings us to this week’s title. Thunder on the Battlefield (both volumes) contains stories by a number of names that aren’t familiar to me. Normally that’s a sign to not get my hopes up, but in the case of the first volume I take it more as an indication that there aren’t enough people publishing sword and sorcery to accommodate the number of people writing it, and writing it well. (As of this writing, I’ve only just started the second volume but the quality hasn’t dropped so far.)

Swords isn’t a perfect book, but I was surprised at the overall quality of the contents. There’s only one story that I would consider a dud, and the rest ranged from competent to extremely good. Here’s a quick run-down of what the first volume contains.

“The Horde” by G. Jerome Henson deals with what happens when a conquering empire assimilated the conquered into its armies and trained them a little too well.

“Paper Demons” by Jay Requard concerns a group of mercenaries sent to kidnap a sorcerer who turns out to be other than what they’re expecting. I especially liked this one, as I the mercenary in charge of the mission has to use his brain as much as his brawn to accomplish his objective.

D. T. Neal’s “The Wolf and the Crow” seems to be part of a larger story, in which a tyrant called the Manticore has imposed harsh laws on the people. That’s not a complaint; if this one is part of a bigger story arc, I’d like to see more about this character. Farys is a hedgeknight who rescues a woman accused of being a witch by choosing to take on the Manticore’s champion in single combat. The fight scene in this one was especially well choreographed.

A lusty warrior wanders into trouble when he comes across the witch of the Forest of Shadows in John F. Allen’s “Forest of Shadows”. Jaziri has a habit of getting himself in trouble where the ladies are concerned, and this is no exception.

Marcella Burnard’s “Emissary” was the best story in the book as far as the craft of writing is concerned. The prose flowed smoothly as it swept me along in the tale of a woman, now a warrior in the service of her goddess, returning to the village in which she was born to right a grievous wrong. This is another character I’d like to see more of.

David J. West (no relation to your intrepid blogger) always delivers a good story. In “The Dogs of War” he takes us to the siege of Constantinople and a pair of mercenaries, one a Viking and the other a German, who are the only hope the Crusaders have.

There are few humans in Alexis A. Hunter’s “The Red Hand.” Rather, we’re dealing with centaurs who are at war with a sorcerer. It’s about one centaur who is brought back from the dead by the sorcerer’s daughter and given a chance to end the war. This is probably the bleakest story in the book.

Editor James R. Tuck contributes a story as well as an introduction. “Where the Red Blossoms Weep” was one of the more interesting stories in the book, and it certainly had one of the more interesting protagonists I’ve seen in a while. Although not an Isrealite, Theok worships Yahweh. In this tale, he has to deal with the denizens of a battlefield who show up after the battle is over. And I’m not talking about the crows.

Loriane Parker’s “Thief of Souls” is a tale of revenge in which an undead warrior must seek his revenge and free the soul of his one true love. This one was also one of the more original stories in the book.

In “The Gnawed Bone”, W. E. Wertenberger puts a group of mercenaries in a whole lot of trouble when they sneak out for a few drinks while their commander is away. I thought the monsters in this one wouldn’t have let the men stand around jawing for as long as they did after the men woke up. Still, this is Wertenberger’s first published story, and he shows promise.

In Stephen Zimmer’s “All the Lands, Nowhere a Home”, we have a female mercenary who spends nearly the first 20% of the story rescuing a girl from being raped and a barmaid from the attentions of a lout, then spends some time pondering how there are few men she would be interested in before actually getting to the main plot. Gee, we’ve never seen that before, have we Sonja? This is the only one that fell flat for me. The slow start, followed by a vaguely defined threat from some sort of evil from the darkness taking advantage of a kingdom weakened by war, with bad dialogue between the protagonist and her potential love interest, just wasn’t up to the standards set by the rest of the contents.

The final story was that of a female mercenary the way they should be written. J. S. Veter’s “The Witch of Rymal Pass” is original story of a woman seeking revenge on the person who set her and her team up years ago, killing her brother in the process. The question is, who was the true mastermind behind the betrayal? 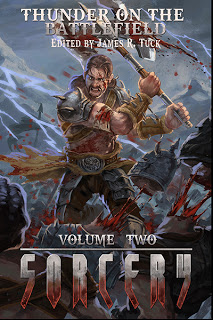 So, overall, this was a strong anthology, with the selections by Requard, Neal, Burnard, Tuck, and Veter being standouts. Or rather, the first half of an anthology. I’ll review the second volume, Sorcery, next week and give some thoughts on the anthology as a whole. I have to say, editor Tuck has set a high standard for the next volume.

A quick word on the production values. My understanding is that there is a print edition in the works, but at the moment Thunder on the Battlefield is only available electronically. There were no weird page breaks or anything like that, and the cover is sensational. However, there were two things that bugged me. The first is that there is no interactive Table of Contents, at least not in the Kindle edition. I had to flip back to stories I wanted to reference one page at a time while writing this review. The other thing was that it seemed like every time there should have been an apostrophe used to indicate possession, the apostrophe was missing, while it showed up in cases when the plural form a noun was being used. I don’t know for sure that it happened in every case, but it happened often enough that I started noticing every time.

Still, I’ve seen a lot worse in the electronic editions from major publishers, so if that’s all that’s wrong with the book, then I can live with it. If you like sword and sorcery, you should check this one out.