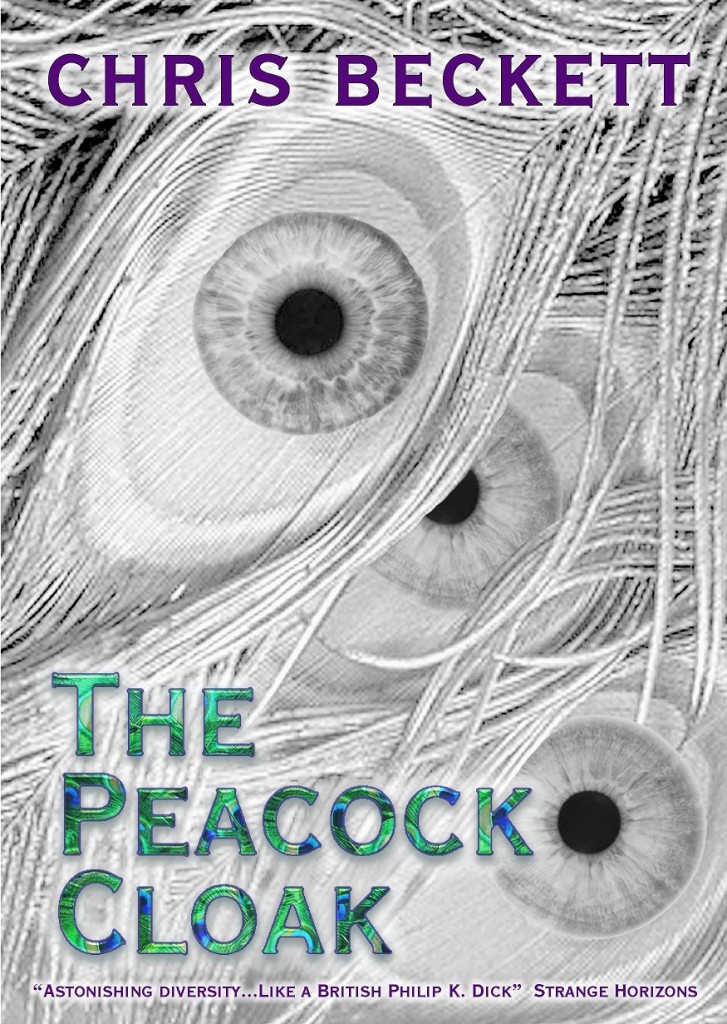 Chris Beckett has been publishing short stories since 1990. His debut novel was The Holy Machine, followed by Marcher, and last year, Dark Eden, which won the Arthur C. Clarke Award for the Best SF novel published in the UK in 2012. His first collection of short fiction, The Turing Test (2008), won the Edge Hill Prize. The Peacock Cloak is his second collection, bringing together a dozen stories first published between 2008-12. Most of these stories originally appeared in Asimov’s or Interzone, two in Postscripts and one, ‘Our Land’, in the NewCon Press anthology, Conflicts.

The book opens with ‘Atomic Truth’. Jenny has just left work, is heading to the railway station, excited about going holiday. Like almost everyone else, she is immersed in the virtual world of ‘bug eyes’. Richard, a schizophrenic, is one of the few with no use for virtual reality. He already experiences intrusions into his reality from which he can’t escape. ‘Atomic Truth’ is set in a near future in which something akin to Google Glass has become ubiquitous, but in which human kindness is still analogue. ‘Rat Island’ is set in the same future, possibly even looking back on the same day, as Richard, or someone fitting his description, makes a cameo in the background. It is a bleak, chilling insight into the propensity to marginalize that which is vital but disturbs is over the lure of all that glitters.

‘Greenland’ could be the set a few decades into the same future. When Juan loses his job he is desperate for money to support his partner and daughter. They dream of being able to escape sweltering, crowded Oxford for the temperate Republic of Greenland. One day Juan is made an offer he can’t refuse. ‘Greenland’ is a stunning story about the way we rationalize our concerns and ignore the suffering of those we don’t see and will never meet.

‘Two Thieves’ is a sardonic comedy in which the titular felons find themselves on a benign but dull island prison. An archaeological dig, excavating remains from the Old Empire, provides an escape route, but greed may still be their undoing. A wry tale. ‘Johnny’s New Job’ takes as a starting point the blame-the-social worker mentality prevalent in some sections of the media and freewheels it into a 1984/Stalinist nightmare comedy where innocence is no excuse and everyone has to work hard to meet their quotas. “…he makes new rules to ensure that it will never happen again. You must know that, mate! He does it every time!”

‘The Caramel Forest’ has a touch of Hansel and Gretel, a beautifully characterized tale of wonder and violence on a world where colonialism rules and racist fears are as strong as ever. It’s very much a case of shoot the messenger in one of the strongest stories in the collection. ‘Day 29’ is set on the same planet as an Agency staff member prepares to go home after three years, knowing that he may forget everything he experiences in the last 40 days before matter transmission. An intriguing meditation on memory and morality and the unsettling possibilities of forgetfulness.

In ‘The Famous Cave Paintings on Isolus 9’ an interstellar travel writer finds love, only to face an existential crisis. Beckett pays homage to galactic empires past with a world-spanning city, then delineates the cultural imperialism inherent in the most benign meeting of unequal powers. ‘The Desiccated Man’ is another tale of a lone space traveler, this one sociopathic and motivated only by money. Jacob Stone is technically a starship captain, in reality only aboard his cargo vessel to check that nothing goes wrong, which it never does. Nothing with the ship, that is.

‘Poppyfields’ is an adjunct to Chris Beckett’s novel, Marcher. A girl slips from one universe into another, and briefly into the life of an unhappily married man. ‘Our Land’ also features parallel realities. A teacher finds himself in the mind of an alternative version of himself in a world in which Britain has been invaded by adherents to a Celtic religion centred around the staff of Joseph of Arimathea. The parallel with modern Israel and Palestine is clear, even to the bulldozers. By placing the English in the position of Palestinians Beckett gives the reader a new way of thinking about land, nationhood and justice.

The collection ends with the title story, another allegory. Fabbro created the virtual universe of Esperine and placed seven copies, one exact, Tawus, and six distorted, of himself within its garden wilderness. For millennia there has been rebellion and war. The end game approaches. Paradise Lost, the Garden, God, the rebel angel… reconfigured into SF. A beautiful, ambitious and reflective story and a fitting note on which to end.

Long associated with Asimov’s in the US and Interzone in the UK, for those who don’t read those magazines Chris Beckett’s seemingly sudden rise to genre stardom may have come as a surprise. If you haven’t yet discovered his work The Peacock Cloak is an excellent place to start. It is available as a signed, limited edition (150 copes) hardback at £20.99, or as a paperback at £10.99. You can order copies direct from NewCon Press.