When many people hear the words “Sword & Sorcery”, they immediately think of Conan. He might be Robert E. Howard’s original, or the L. Sprague de Camp/Lin Carter pastiche Conan, the Marvel Comics Conan of Roy Thomas, or sadly, the Arnold Schwarzenegger movie Conan. No matter which they think of, there is good reason for this association. Conan was not the first S&S character, but he was the first S&S superstar. Howard’s most popular character, hated by some critics, dismissed by others, it matters not. Conan is iconic. He is the poster child for all things Sword & Sorcery.

Conan’s career was never well planned. Howard once wrote to Clark Ashton Smith: “Some mechanism in my sub-consciousness took the dominant characteristics of various prize-fighters, gunmen, bootleggers, oil field bullies, gamblers, and honest workmen I had come in contact with, and combining them all, produced the amalgamation I call Conan the Cimmerian.” He was said to be born on a battlefield but a scrap heap is actually more accurate. After Howard’s first S&S hero, Kull, failed to produce, the author rethought the mix and adapted a rejected Kull tale, “By This Axe I Rule”. Howard added supernatural elements and Conan appeared for the first time in “The Phoenix on the Sword”. Again, not well planned, for this story takes place at the end, when Conan has secured his kingdom. No spry little barbarian running around the hills of Cimmeria. Such tales did follow though. “The Rogues in the House” and “The Tower of the Elephant” go back to Conan’s youth when he survived as a thief in the streets of Zamora. 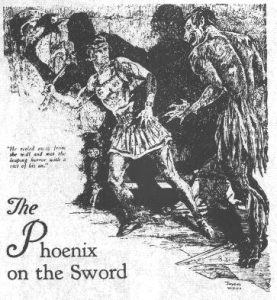 With both ends in place, Howard proceeded to fill in Conan’s career, as pirate, bandit chief, as mercenary soldier, frontier scout and eventually, king. These tales proved popular in Weird Tales, where all the original Conan tales appeared except one. (“Gods of the North” was rejected and appeared for free in the fanzine The Fantasy Fan.)  Howard enjoyed writing fantastical history; Farnsworth Wright appreciated any ghoulies or monsters for weird effect, and the series went on for four years. It only ended when Robert E. Howard ended, with a suicidal bullet in the head. The last original Conan story was “Red Nails”, a good novella (a bit of a potboiler) but Conan went out on a high, not a low. Eighteen stories and novels, many classics including “Queen of the Black Coast”, “The Devil In Iron” and “Beyond the Black River”. We all have our favorites.

It might have ended there. Howard had, unlike H. P. Lovecraft and his Cthulhu Mythos pals (of which Howard was one) kept Sword & Sorcery largely to himself. He really had no idea what he had created, an entirely new sub-genre, one filled with sword-swinging adventure set in a secondary world of magic and monsters. It would take later writers, Henry Kuttner in particular, to set Sword & Sorcery down that road. In 1936, Conan was a popular character in a minor pulp magazine. Howard was no longer there to write about him. Conan had only started his career and could easily have bowed out for good. But Conan would rest in his Pulp cocoon for 10 years (until Arkham House would release Skull-Face and Others, containing five Conan tales.) The world was not yet done with the raven-haired barbarian from Cimmeria, not by a long shot.