An author’s advice on writing, even through the hard times.

One evening after work my husband went for a bike ride with his best friend. Ten minutes later the neighbors were at my door to tell me there’d been an accident.

The hardest thing I’ve ever done, or ever will do, was to sit with my daughters – then ages 3 and 5 – two days later, and tell them their father was gone.

That happened in July many years ago.

Ironically, I’d just gotten back to writing regularly and daily, thanks to my husband’s support. We’d known each other since tenth grade, been a couple since our senior year in high school. He was my best friend and biggest booster of me as an author. He really wanted to see me become published and I was seriously at work in the evenings and on the weekends hat year on a science fiction novel that I intended to submit to publishers and agents.

Did I continue to write through the tough times after his death? No, I did not, Widow, single mother, demanding career at NASA/JPL that kept the roof over our heads and food on the table, fixer-upper house we’d bought because he had mad skillz (and I’m hopeless with house repair of any size), huge yard….yeah, no energy or creativity left at night for writing. I still thought about my stories, because they never go away, thank goodness, but no words went on paper. In fact, we have a joke in my family how the characters in that book were left in jeopardy on a temple roof for a LOT of years. 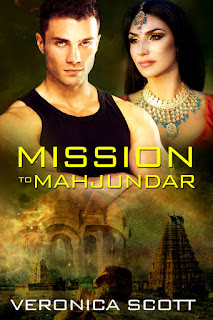 I got back to the actual writing eventually and became a published author. I did major overhauls and revamping on the manuscript I’d been working on when he died, and it became Mission to Mahjundar. (By the way, the new sequel to that, Hostage to the Stars, is coming out in about two weeks!). Dedicating the book to him (and my daughters) was a bittersweet but happy, proud moment.

My creative energy is heavily affected by my health and what’s going on in my life, so as I said, if things are dire enough, I don’t write. I never stop thinking abut the people, places and plots though.

A message from SFWA’s President, Mary Robinette Kowal: Last year, a member came to SFWA’s Grievance Committee with a problem, which on the surface sounds simple and resolvable. He had written novels and was not being paid the royalties that were specified in his contract. The Grievance Committee is designed to resolve contract disputes like […]

Thalass and Naiad do the Dance of Avoidance