Comparisons are odious. That’s what my mother always said to me, and it’s true. 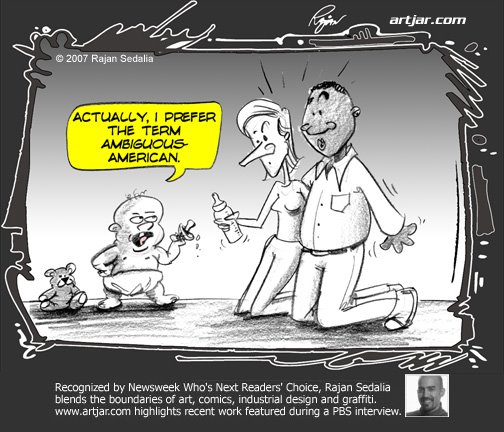 Classification is even odiouser. (Deal with it, spellcheck!) Finding new ways to classify people into groups has been an obsession of Western society ever since the old reliables, class and nationality, went out of style. I remember well how tormenting it was to be in college at the height of the “hyphenated identity” trend: I was classified as a Caucasian-American, but I wasn’t American! And there weren’t any campus groups or insta-friend crowds for white English-speaking immigrants. I felt so misunderstood and left out! Pause and shed a tear or two for my teenage self. Thank you. Now rejoice with me that I’m over it.

I still can’t resist a good classification system, though. My favorite at the moment is the Myers-Briggs Type Indicator instrument. Have you taken this test? Based on Jungian psychology, it’s uncannily accurate (go on, put aside your image of Jung as a wild-eyed proto-occultist; he did make sense sometimes). Here’s the estimated breakdown of personality types in the US population.

The most popular personality classification system in Japan is blood type. Os are gregarious and compassionate, As are uptight and serious, Bs are optimistic and easygoing, ABs are oddballs. I know this is pure superstition because my blood type is A. Uptight, moi? The blood type personality theory got started, like so many unpleasant things, during the interwar heyday of scientific Darwinism. It came back in the 1970s–just like astrology!–and still has a clammy grip on the public mind. In Japan people ask you your blood type the way they might ask you in the West what your sign is.

All this classification business leads in the end to perceived hierarchies. My type is better than your type, sucker. Nowadays we’re required to despise hierarchy and fetishize equality, while simultaneously badmouthing the other lot as a bunch of untermenschen. Breathe deeply. War is peace. Truth is lies. Slavery is freedom.

Fortunately one corner of popular culture remains free from this sort of doublethink and that is fantasy literature. Ever since Tolkien gave us orcs and elves, fantasy worlds have been populated by non-human races which are almost always ranked, implicitly if not explicitly, in a hierarchy with humans at or near the top. And ever since the film versions of LOTR came out, people have been debating whether this kind of thing is really just scientific racism dressed up in horns and hooves. 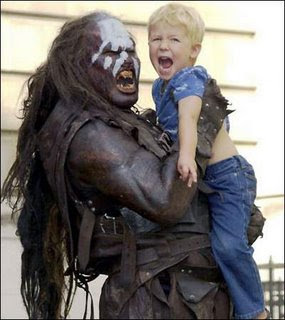 I generally have no time for this sort of allegorical thinking. “If it’s dark-skinned or non-human, it must represent a black or brown person” is about as shallow as critiques come (and generally quite insulting to black and brown people, too). But when it comes to fantasy films, I think the racism-spotters may have a point. Film transposes humanity onto non-human races by using human actors to portray them. Take the burly chap at left. He does look like a large black man! Presumably because he is one. He’s costumed as one of the Fighting Uruk-Hai, who are my absolute favorite bit of The Two Towers. (I never pictured them looking like this, though. In my mind they don’t look, er … human.)

Then we’ve got Avatar, which utilizes CG to portray the naive (but wise, noble, etc.) natives as … blue-skinned humans! Of course, I get why they did this: the hero could not have had a romance with a native princess who didn’t have more or less human physiognomy. And the romance was the point of the whole film. But it made a lot of people upset. Perhaps they misunderstood James Cameron’s intentions? Here’s the man himself on his reverence and affection for the downtrodden of the world, whom he explicitly identifies with his Na’vi: “There is a value-system that [indigenous people] naturally have that has allowed them to live in harmony with nature for a long time and those principles, that wisdom, that spiritual connection to the world, that sense of responsibility to each other, that’s the thing that we need to learn.” Oh, all right then.

This is of course unadulterated bosh. Among the many many indigenous peoples of this lovely and teeming world are certainly some principled, wise, spiritual, responsible individuals, and also some pompous blowhards who would fit right in in Hollywood.

At this sort of juncture I always like to remember Professor Challenger among the ape-men:

They all jabbered and chattered together. Then one of them stood out beside Challenger. You’ll smile, young fellah, but ‘pon my word they might have been kinsmen. I couldn’t have believed it if I hadn’t seen it with my own eyes. This old ape-man–he was their chief–was a sort of red Challenger, with every one of our friend’s beauty points, only just a trifle more so. He had the short body, the big shoulders, the round chest, no neck, a great ruddy frill of a beard, the tufted eyebrows, the `What do you want, damn you!’ look about the eyes, and the whole catalogue. When the ape-man stood by Challenger and put his paw on his shoulder, the thing was complete. Summerlee was a bit hysterical, and he laughed till he cried.

This passage demonstrates that comparison can be the enemy of classification. By comparing himself to Challenger, the ape-man overturned the two groups’ classification or each other as enemies. So, by making comparisons across group boundaries, we note similarities that undercut all our easy generalizations.

The comparison between Challenger and the ape-man provokes laughter from both sides. More often, as my mother knew, comparisons provoke envy and contempt or worse.

The most frequently proposed alternative to this sort of odious comparison is tolerance. Can’t we all just get along? We’re all different and that’s OK! Predictably, though, this approach leads at best to mutual indifference and erosion of public spaces. At worst it leads to pressure cookers full of ball bearings at the Boston Marathon finishing line.

I graduated from the same high school as Dzhokhar Tsarnaev. It’s a great school, with some amazing teachers and students from about eighty different countries. Everyone gets along! Everyone is encouraged to be him- or herself! There’s zero pressure to assimilate into American culture or anything else. I experienced this environment as frightfully alienating. I can only imagine how it must have felt to Tsarnaev.

Maybe if someone had laughed at him more often?

Laughter is instant intimacy. Let’s all go and laugh at someone today! But do make sure they get the joke.

The Linguistic Wonders of Fez

George Lawlor has publicly posed the question. Maybe we should ask DeviantArt?

Whether you’re a new dad, or a dad starting out the new year, it’s time to think about yourself. Christmas, Thanksgiving and Halloween before the New Year were all about the kids. But they’re over. Now you’ve got a few quiet months with hopefully no yard work and some time to actually relax.  Do you […]

How Young is a Young Adult?