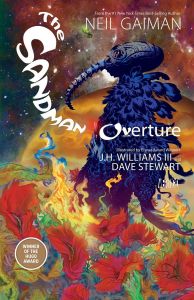 I had the privilege of signing books at Friendly Neighborhood Comics in Bellingham, MA a couple weeks ago, and the owner, Ernie Pelletier, brought me up to date on fantasy comics, introducing me to some new friends, and reminding me of old favorites. There’s a ton of great books to get into right now, and not just super-heroes. The current crop of fantasy comics has something for everyone, from kids to adults who like their gore (it me).

Neil Gaiman’s Sandman was an early example of bringing mythology and fantasy into comics, to amazing and award-winning effect. He’s returned to the world of Sandman over the years, always to good effect. In 2013, he wrote Overture, now out in a stunning collectible hardcover edition with essays by the artists. And in 2018, DC is launching a Sandman Universe line of four new series, guided by Gaiman but written and drawn by other artists. The first issues came out in August. To me, this is nothing but good news. I love Gaiman’s vision, and I also think the world is a big enough sandbox (hurrrrrr) to welcome other artists. Lucifer by Mike Carey was an incredible spin off, whose praises I never stop wanting to sing, and I can’t wait to see what others do. 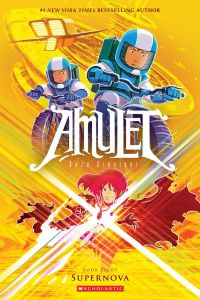 Amulet is a lovely, mysterious series for children and young adults, mixing tentacle creatures and stuffed animals, quests, robots, and other worlds. Fresh from a family tragedy Emily, her mother, and her younger brother move into an old, run-down house belonging to Emily’s great grand-father. It isn’t long before Emily has picked up a mysterious amulet, her mother captured and eaten—though not fatally—by a tentacle monster. The amulet’s agenda seems like it may be sinister, though it also may give Emily the ability to undo the worst day of her life. By New York Times Bestselling author Kazu Kibushi, this series is ongoing, with the 8th book just released on Sept 25, 2018. 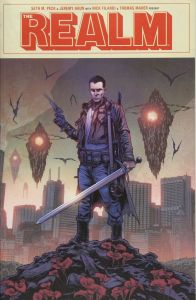 What if The Walking Dead but fantasy monsters instead of zombies? Enter The Realm by Seth M. Peck and Jeremy Haun, a shattered America populated by strange magical creatures, changed humans, and factions with mysterious agendas. One of the things I loved about the first book is how much the reader is thrown into the middle of things. Some characters we only meet in beautifully drawn images with no captions, giving mere hints of what is to come. Others we travel alongside, though they all have secrets that the reader does not yet learn. This is the goriest of the books I’m highlighting in this post, and I am here for it: guns blow holes in heads, grenades blow off limbs, warriors hack people apart with swords and bayonets, the orcs have a taste for human flesh—and it is all drawn vividly and viscerally. The first trade of The Realm came out April 3, 2018, and the next one will be out Dec 4. 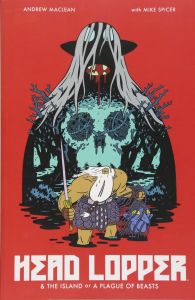 Andrew MacLean, the man behind Headlopper, was also signing at Friendly Neighborhood Comics, and as the one of my friends voted “Most Likely to Mention Severed Heads on Twitter”, I knew I was interested just from the title, and the first trade did not let me down. The titular Norgal Headlopper has a big sword and does what it says on the tin: lops heads. He’s also carrying a sack containing the head of an evil old witch, unfazed at having her own head lopped off, always ready to give Norgal some sass. Headlopper has a charming gonzo style as it follows its hero through a world with a somewhat Viking aesthetic, but a mythology all its own. Come for the severed heads, stay for the…even more severed heads, comic relief, and weird world-building. The second trade came out earlier in April 2018.

What are your favorite fantasy comics? What do you think I should highlight in future blog posts?

Facebook Live will feature a reading by Alma Alexander this coming Sunday.