Stanley Kubrick offered two visionary glimpses of the future in his films. We really need to get better at picking futures. 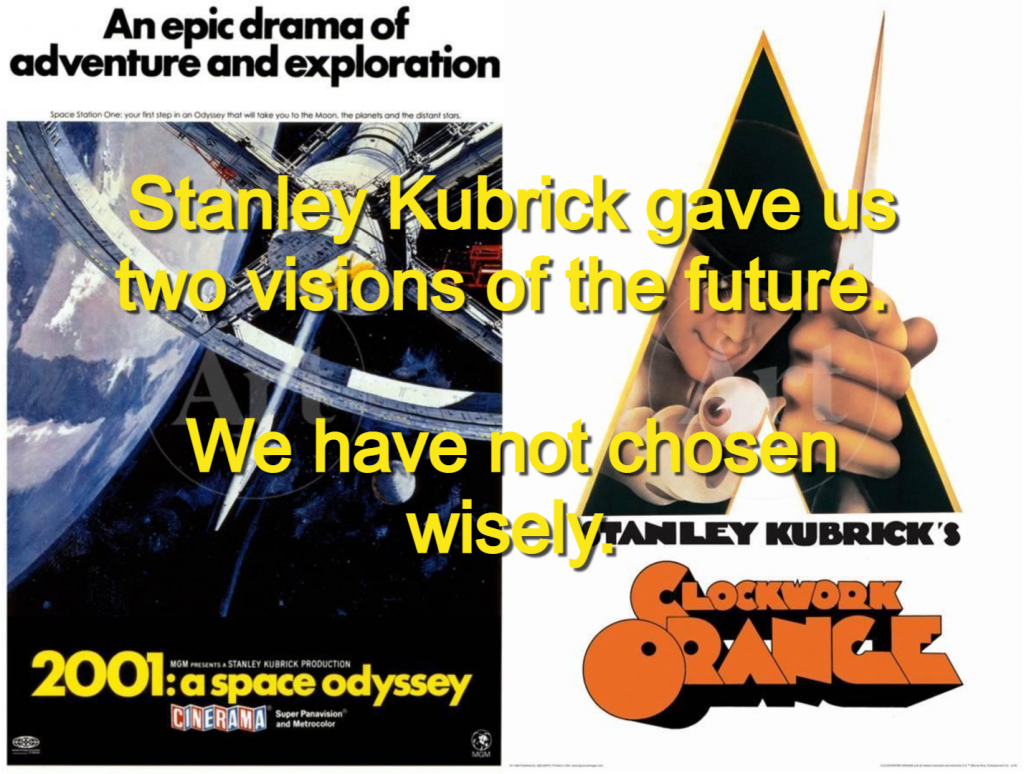 Looking through the Sunday New York Times recently, I came across two vaguely related pieces of science fiction arcana. One, that the mysterious monolith in the desert, which had taken over the media for a week, had equally mysteriously disappeared1, and two, that David Prowse had died2. Which got me thinking of Stanley Kubrick. The 2001 connection is pretty obvious, but it wasn’t until I read the article that I realized that Prowse, who (as you no doubt know) was the man inside the original Darth Vader costume, came to George Lucas’ attention for his role as a bodyguard in Clockwork Orange. Which got me thinking.

A long time ago, in a theater far, far away, I saw 2001: A Space Odyssey. At fourteen, I’d been an avid science fiction reader for five or six years and it all made perfect sense to me, and except for the part where almost everyone gets killed by Hal, it was a world I really wanted to live in.

A few years later Kubrick came out with another science fiction film, Clockwork Orange. I convinced the tall leggy lass I was trying to talk into being my girlfriend that she wanted to see it too, and  we got onto a bus to New York City, an hour or so away, where it was playing.

It’s not that I didn’t think the latter was good. It was, in fact, both brilliant and brilliantly executed. It’s just not a world I wanted to live in. OK, my teenaged brain would have been happy to go with the sexy parts, but a future of brutal gangs, out of touch elites, and mindless pop songs did not grab me. Unfortunately, aliens or not, it was always the more likely future.

And now the one we have looks depressingly like it.

Science Fiction in the movies tends to lag behind the literature, but Clockwork Orange came out in 1971, more than a decade before William Gibson wrote Neuromancer and launched the whole cyberpunk/dystopian ship we’ve been sailing on ever since.

Granted that the subtext of 2001 was that mankind was running out of time before it imploded, a message that gets lost against the backdrop of spectacular visuals of space ships and star-filled wormholes. Granted, that there’s no assurance that AIs will turn out to be more Asimov than Skynet, and the fact that Microsoft’s AI chatbot went full internet troll in just a few hours3 is an even more disturbing melding of the two futures. Granted all that, 2001: A Space Odyssey still showed humans striving to understand the universe and find their place in it.

The future isn’t over yet. Science Fiction is still asking us how we’ll face the challenges before us, and new voices join the conversation every day. We should listen to what they have to offer, and hope that some of what has gone before will be useful to them. And that together we will choose more wisely in the future.

Scientists discover a way to see the fabric of our universe and manipulate it, only to discover that others have been there before them

Self/Less: The film that stopped trying.

Some of the Most Spectacular Astronomy Images of 2018