Walter Day is the founder of Video Game scorekeeping and adjudication services and a recognized founder of e-sports and has, among other things, helped the Smithsonian with its video game exhibition, established a video games Hall of Fame and has appeared in numerous films as himself.  He’s got quite the storied and successful history, which touches science fiction beginning with his working with the Guinnes Book of World Records and its entry for the Hugo Awards as the world’s longest running awards for SF;  he’s made presentations at several Worldcons.

Additionally, he has devoted himself to creating tradinig cards devoted to various aspects of popular culture, including science fiction.  Each year a new set of honorees is unveiled.

From his website, a bit about the SF Historical Trading Cards –

With already more than 150 cards designed, the sci-fi set has no end in sight and could easily amount to 300-500 different cards before the project runs out of gas. And, like the Biographical Trading Cards set, new cards are often uveiled during ceremonies. For example, card #65 (author C. J Cherryh) was presented on the stage during the 2016 Nebula Awards weekend festivities, in Chicago, IL. And, card #34 (author Robert Silverberg) was among many cards presented on the stage during the Grand Masters Talk at the 2016 WorldCon, in Kansas City, MO. On Saturday, May 18, 2019, at the 2019 SFWA Nebula Awards Conference in Los Angeles, California, Science Fiction Historical Trading Card #211 was presented to William Gibson — the author of Neuromancer — as part of the ceremonies that enshrined him as the 2019 SFWA Damon Knight Grand Master of Science Fiction.

A couple of days ago, Amazing Stories was contacted to inform us that publisher Steve Davidson would be included in this year’s set of newly minted cards and, today, the announcement was made on Walter’d Facebook page:

2020 SCIENCE FICTION TRADING CARD AWARD CEREMONIES
Every year we hold an annual Science Fiction Trading Card Awards Ceremony where we unveil the newest cards in the Science Fiction Series as well present ornate awards to worthy honorees who have contributed greatly to the global science fiction culture. The Ceremony will be conducted on Saturday, May 23rd, at 2 PM at the The Renaissance Baltimore Harborplace Hotel, in Baltimore. In recent years this ceremony has been conducted at WorldCon 74 (Kansas City), WorldCon 75 (Helsinki, Finland), WorldCon 76 (San Jose) as well as smaller ceremonies at the last five years of the Nebula Awards Weekend. This year’s awards ceremony will be held at Balticon 54, which is the annual Maryland Regional Science Fiction and Fantasy Convention put on by the Baltimore Science Fiction Society. Here are some of the trading cards that will be unveiled during these ceremonies and given away as free gifts to the attendees at the event. Cards honoring this year’s guests at Balticon will also be released at the event (but aren’t yet shown here). Also, here is a link to the Balticon website as well as a link that leads to the full gallery of the 182 SCIENCE FICTION HISTORICAL TRADING CARDS already in print.

Here’s the card for Davidson, along with a gallery of other cards, both newly minted and existing: 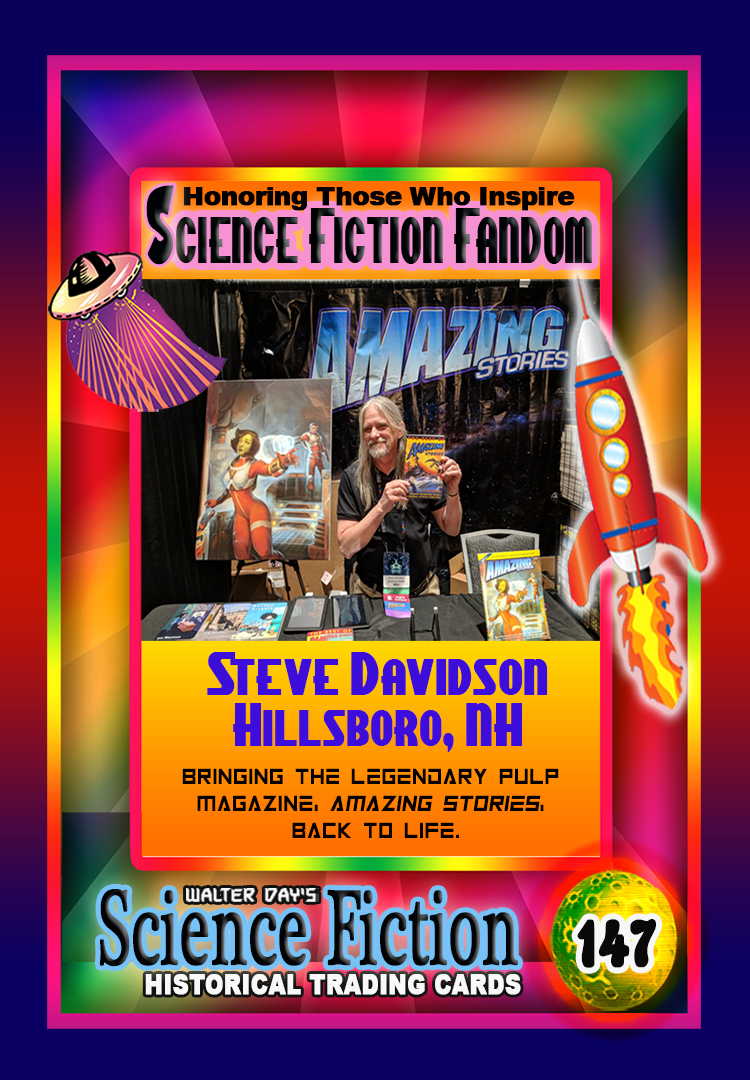 Steve Davidson on being informed: “I’m extremely honored, especially considering the company. But now I have to write my bio”

Please visit the Walter Day Collection website, here, and check out all of the wonderful history revealed through this fascinating project.

A Chinese vision of the near future