It is the age of dystopian women’s fiction. As things become more unsure out in the world, dystopian, politically-charged fiction that elaborates on the extremes of supposed “traditional values” have risen in popularity. In that vein, I present to you Vox by Christina Dalcher, a cautionary tale heavily reminiscent of those literary works that came before it in the genre.

Vox is easily defined as a more modern take on The Handmaid’s Tale by Margaret Atwood. Dalcher spells out how this fictional America devalued women and supposedly followed religious doctrine to impose ludicrous laws on them. Perhaps Dalcher was inspired by that work and decided to take it in another logical direction. Either way, if you enjoyed Handmaid’s Tale, 1984 or other notable literary depictions of a utilitarian government, Vox is your next foray into “What if?”. 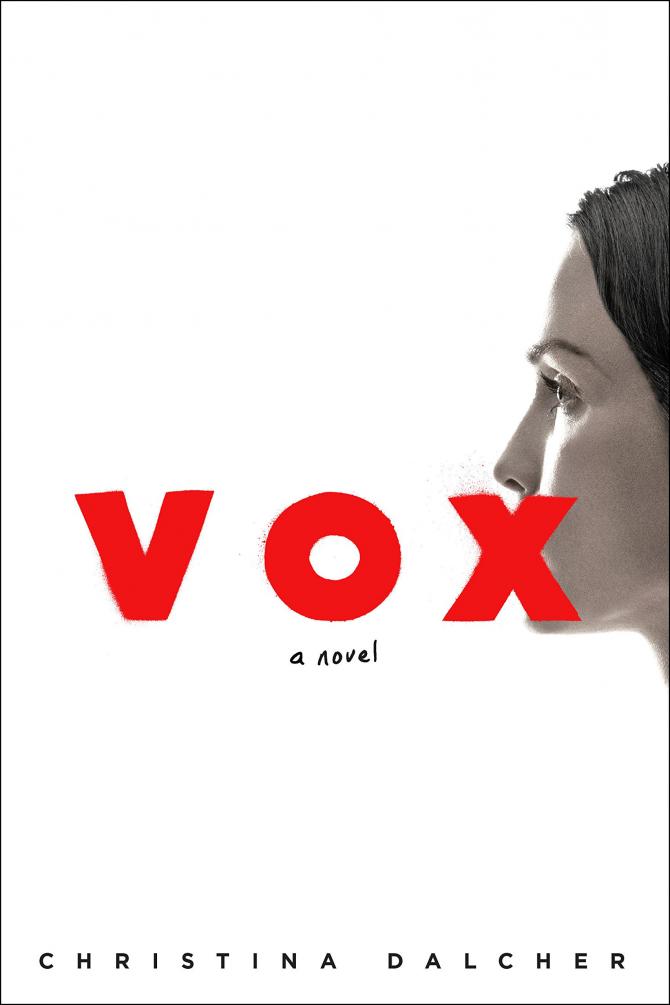 In Vox, an uber conservative doctrine makes it so women are stripped of their rights and forced to return to their “rightful place” in the household. Similar to The Handmaid’s Tale. However, Dalcher’s take has an added, insidious twist: Every woman is fitted with a counter on her wrist that keeps track of how many words she speaks each day. Women are only allowed one hundred words per day. Anything above that will electrocute her. For context, this review is already over 200 words.

This book is written from a true love of language. The narrator of the story is Dr. Jean McClellan, who was a linguistics professor and researcher before she and every other woman was virtually silenced and thrown back into the kitchen. The author herself has a doctorate in theoretical linguistics from Georgetown. A love of language, and a fear of its loss, is palpable.

It’s not hard to see why Dalcher chose restricted speech as a method of illustrating the extremity of her speculative political dystopia. 1984 also held this theme, as the government slowly eroded the lexicon until people couldn’t describe the qualities of something beyond “good” and “ungood.”

Even in her relative silence, Jean makes contemplations about language that say more than she says. Everything has more meaning, even when she’s making fun of how, in the old days, words were wasted on euphemisms and metaphors: “No one dies from love outside of a Bronte novel or eats entire horses or lays his life on the line for a baseball game. No one. But we say this garbage all the time.”

And she often thinks about the stunted growth of her young daughter, Sofia: “By six, Sonia should have an army of ten thousand lexemes, individual troops that assemble and come to attention and obey the orders her small, still-plastic brain issues.”

This change in society happened because of the Pure Movement, which at first seemed like a couple of wackadoos, and soon became the cultural norm when a new President took office. Is this book a political response to the world we’re living in? You bet it is!

Things change when it turns out that Jean and her colleagues are the only researchers able to cure a rare disease afflicting the President’s brother. The women are temporarily freed of their counters and return to work with a strict deadline. 1984-esque Big Brother vibes run rampant as Jean and her collegues realize there is more to the government-mandated research than originally implied.

At the heart of the story is Jean’s family. She has three boys and one little girl, Sonia. Sonia is six years old and has worn the counter on her wrist since she was five. At a crucial time for language development and reading skills, girls like Sonia only learn the basics of sewing and arithmatic at school. Reading and spelling are not allowed. Worse still, the school begins a daily contest for the child who speaks the least. One day, Jean realizes with horror that Sonia has been rewarded for being silent all day.

Another important through line with Jean’s family is her son, Stephen, who is maturing into a world that devalues women. Through Jean’s observation of him, we see him turn from a student who just has to take these mandated religious-studies classes, to a puppet completely falling for the supposed values thrown on him and his peers. A simple fight over who should buy the milk in the house shows how nasty her son has become towards Jean, and how much the system is changing the children brought up in this new world.

Jean sometimes turns to the recent past, explaining to the reader in snippets what led up to her new normal. How there were protests, arguments on national TV between people of opposing sides. “None of this happened without a fight,” she tells us. She shows us the warning signs while pointing out how she and others could have done more to fight what would eventually happen.

Jean is not a perfect character, and I think that is important. She is definitely likable and relatable, but she’s also doing questionable things. She begins a relationship with colleague Lorenzo that is not only morally-ambiguous in the context of her strained relationship with her husband, but also adds another layer of danger to her story. Adulterers are thrown into concentration camps or work farms and are given a counter that shocks them if they speak at all. Quite the stakes for a lovelorn secret romance.

Vox is a book that asks “What if?” and places you in the shoes of someone affected by the extreme outcomes of government meddling in personal lives. It’s frightening, tense and sad, but there are some moments of levity that break through the gloom. Somehow, we’re along for this ride with Jean, as she fights for some semblance of her old life while trying to console her daugher and correct her misguided son. Events grow very intense as the story progresses. Vox contains a set of twists that leave you turning page after page, desperate to see how it all ends.

Vox is available to read now via Amazon or your local independent book store.

Bridget LaMonica is a contributor at Den of Geek. Read more of her work here or follow her on Twitter @BridgetLaMonica.

Steve reviews the May/June 2021 issue of The Magazine of Fantasy and Science Fiction. It’s the first one fully edited by Sheree Renée Thomas. Is it good? Read the column and see!

Nine scary tales but like all things that go bump in the night some were chilling and some heartbreaking and some, well some too close to reality.