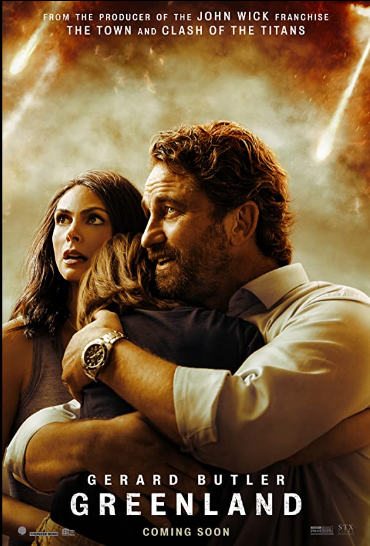 I love dystopian science fiction in books, movies and TV shows so I was happy to watch “Greenland,” the new Gerard Butler action adventure film. Briefly, Clarke, a comet “from another solar system” is on its way to Earth when it breaks apart and at first is expected only to be a spectacular light show as fragments enter the atmosphere and burn up. Oh wait, maybe a few bigger pieces will hit the ground. No, on third thought, maybe whole cities are going to be wiped out by fragments the size of football stadiums. Oh no, wait a minute, this is going to be an Extinction Level Event!

When I read dystopian SF, I’m usually most interested in the buildup to the End of the World As We Know It (EOTWAWKI) event, the event itself and how people cope and survive (or don’t). This movie delivers all of that.  In the early minutes of this movie we meet construction engineer John Garrity, his estranged wife Ali (played by Morena Baccarin and his highly intelligent, needy, diabetic young son Nathan (well acted by young Roger Dale Floyd). Recently separated, the couple awkwardly comes back together for a weekend, mostly to reassure their son that life goes on and to host the neighborhood comet viewing party.

Imagine Garrity’s surprise when his phone blares an alarm while he’s at the grocery store on a last minute beer-and-snacks run and all the other shoppers are oblivious. “Must be an Amber Alert,” he says hopefully. Not exactly. The robocall of all time is to inform him his family has been ‘selected’ and to stand by for more information.  Having a message appear on my phone from the Department of Homeland Security when I’m in the juice and cookies aisle would unsettle me too! Perplexed he rushes home, noting big convoys of military troops on the move and a sky full of planes.

He’s just in time for the neighborhood party in his living room. The group watches the countdown on TV and…nothing happens. The first fragment was supposed to land in the ocean, well away from any cities. Surprise! It wipes out Tampa and the blast is felt with disastrous effect where Garrity’s family lives, about 1500 miles away. And then his phone goes off again, and the message also appears on his TV screen. Probably not the greatest idea to have the detailed information that you and your family have been selected for evacuation announced by a robotic government voice while you’re standing in a room full of people who obviously were not so lucky. Instant us vs. them and you can feel the lines being drawn in what was a congenial, cohesive group literally a moment before.

The Garritys pack in a rush and make their escape from the lush suburb, but not without some truly heartrending scenes with the neighbors begging them for various favors. The computer message was quite clear the family couldn’t bring anyone else.

At various times in this movie I was reminded of “Night of the Comet” and “Deep Impact,” which isn’t a bad thing since I liked both of them, but it goes to show how “Greenland” manages to hit almost every dystopian trope as it goes along.  I found the movie uneven in pacing although some sections were quite intense. It seemed long to me at two hours but the writers create quite a complex situation to resolve when the family members become separated due to a series of unexpected events.

I felt there were a few too many coincidences at work in resolving the aforementioned separation mixup but the complicated situation did allow the film makers to show how the impending catastrophe was affecting everyone and to deploy those dystopian tropes.

Hint: Maybe don’t openly wear and flaunt that ‘golden’ QR code bracelet which gives you access to sanctuary. This family is naïve to say the least.

When was the last time you saw a working pay phone? I guess that was my “c’mon, man” for this flick…

Or maybe it was the moment the radio announces “small molten debris will be falling in Upstate New York” and literally as the guy stops talking, the fragments hit exactly the spot where our party is. This is unintentionally amusing because earlier in the movie the point keeps getting made over and over that the government can’t seem to predict exactly where any of the giant fragments will hit.  Bermuda or Tampa, you know? Plus or minus a thousand miles…. But those “small molten pieces” – tracked with pinpoint precision.

A few tropes got missed – no one ran out of gas and the power never went off. I felt there were far too many calm, good hearted people with way too much organization and working infrastructure to be believable, especially at the FEMA camp. With the world facing an extinction level event in a few days, would things really keep running so smoothly? Would so many people really stay at their jobs? Some, yes of course because I like to believe the best about humanity (and the military is portrayed as being particularly selfless, which I for one appreciated, as well as the diversity in their ranks). I guess the Garritys met every good person between Georgia and well, Greenland.

And their share of bad guys too, of course.

I don’t do spoilers so I’ll have to skip some of my observations on the latter parts of the movie.

I give this movie a solid B+. The acting was competent and the production values were great.  It looked like a Hollywood production at $35M, not a movie of the week. Gerard Butler’s Garrity was a pretty believable ordinary guy doing his best to save his family. Morena Beccarin’s character is a mama bear when called upon to be one, which I always admire.  Scott Glenn made a satisfyingly acerbic and pragmatic grandfather.

Maybe if a viewer isn’t a regular consumer of dystopian SF (or raised by a prepper like I was) the plot twists would be more surprising and fresh but the movie is a good contribution to the genre. The ending worked for me. Aspects of the epilog not so much – there’d be another “c’mon, man” here if I did spoilers.

Do we go the way of the dinosaurs? Well, what do you think? It is after all, Hollywood.

I’ve already rewatched a couple of parts. I doubt I’d sit through the entire movie again but I enjoyed the viewing experience overall. Get the popcorn and go for it.

Announcing the finalists for the Premios Ignotus Award 2020