Time waits for no love

Before time travel agent Red finds the first letter from rival Blue on the battlefield, she thinks there is only one way to win the time war: her side’s way, barreling through time and ruthlessly cutting strands as needed. Similarly, before This Is How You Lose the Time War, Max Gladstone and Amal El-Mohtar’s new epistolary science fiction novella, the time travel love story had become stuck in an outdated formula that too often left one lover at a disadvantage. But, as Red and Blue leave one another love notes on infinite battlefields, they remix a time-crossed love story into a wholly new take that elevates the subgenre.

What had become the archetypal time travel love story came to a head in 2013. Following the release of time travel rom-com About Time, a spate of articles highlighted how actress Rachel McAdams had completed the odd hat-trick of playing the time traveler’s girlfriend/wife without ever getting the chance to travel herself. Taken separately, each of the three examples is amusing, but together it’s a worrisome pattern.

In The Time Traveler’s Wife, Eric Bana gets yanked into the past or future at inopportune moments, and McAdams waits for him to return to her present. Owen Wilson hops into a vintage car to the past every Midnight in Paris, and McAdams ditches him for their modern hotel room. About Time sees Domhnall Gleeson pressing the redo button on his past interactions with McAdams, perfecting the bad moments and reliving the good ones, as she proceeds through each interaction without the same benefit of hindsight.

While the latter two examples are original films, they were no doubt influenced by the first, a 2009 adaptation of Audrey Niffenegger’s 2003 novel about chronologically-impaired librarian Henry DeTamble and Clare Abshire, his artist wife. With its twisty timelines, in which each of the lovers knows more than the other about their relationship depending on the time of their interaction, and its bittersweet ending, Niffenegger’s book remains one of the best time travel love stories. Unfortunately, it’s also part of a larger trend, in which this type of romance plays out along very gendered and heteronormative lines: the man travels, and the woman waits for him. 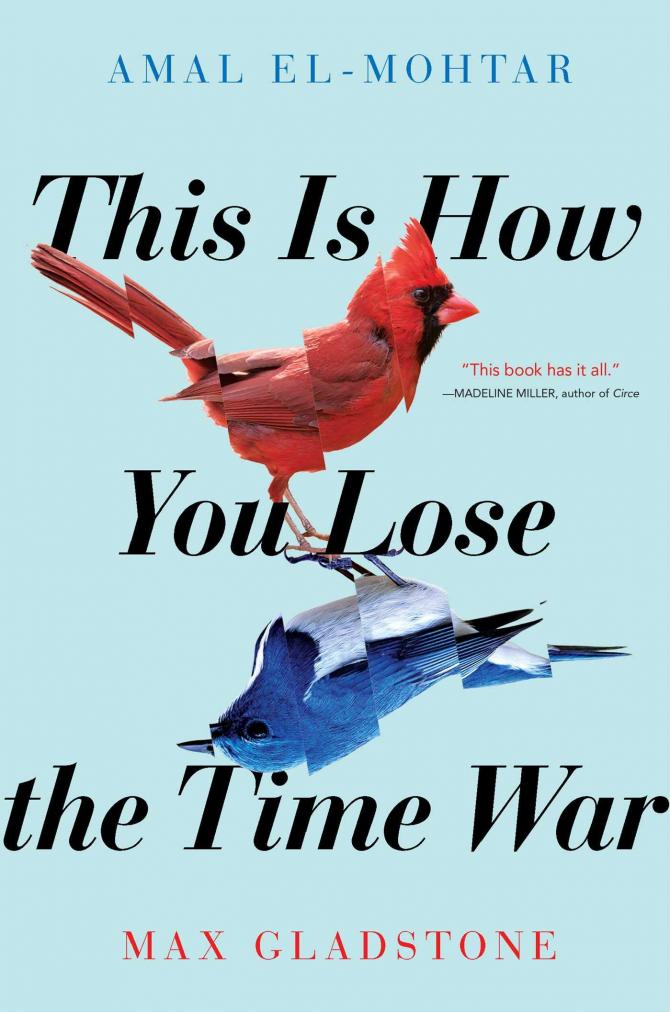 Interestingly, neither Red nor Blue’s gender is mentioned in the marketing materials, yet ever since this book was announced, I was somehow convinced they were male and female—a glaring assumption that I can’t really justify beyond the fact that the co-authors are male and female. Most likely, it was just the way I’d been trained to read the dynamics of a time travel romance on the gender binary (see most epistolary time travel stories).

Red and Blue both use she/her pronouns, but neither fits the heteronormative mold of femininity. Broad-shouldered and brutal, Red is a marvel of machinery, with the ability to adjust bodily components to match the mission parameters. Sometimes that means passing as male in Genghis Khan’s Mongol Empire, other times it’s determining whatever shield will provide the greatest brute strength in battle.

Red’s constant self-modifications bring to mind Paladin, the robot protagonist in Annalee Newitz’s Autonomous, who changes their pronouns from he to she over the course of the novel. Like Red, Paladin’s hulking size leads others to assign masculine qualities to her, despite the fact that in her world bots have no designated gender. But when her human lover Eliasz seeks to call her by female pronouns, in order to combat his own internalized homophobia, Paladin recognizes this request as “the first time he’d been given a choice about something that might change his life”—the first step toward autonomy.

As creatures who are part biology and mechanics, Paladin and Red are able to value their gender identity as an expression of their freedom to move through their respective worlds unconstrained by binary gender norms.

By contrast, Blue favors disguises; a consummate spy, she dons silks to lay down a honeypot or slaps on a chrome mask and typewriter keys to infiltrate a cyberpunk future in which, ironically, Red would fit in much better. She is a femme fatale and a wife, depending on which persona the mission requires. Each time agent performs gender in a dozen different ways throughout the story, depending on where in the time braid they find themselves.

The more that Blue and Red appear in different forms, the less their gender actually matters to the story. As “she” applies to dozens of different time agents, its usage begins to feel universal, like in Ann Leckie’s Ancillary Justice. In the Imperial Radch, the author explained on her blog, there are neither gendered pronouns nor much of an emphasis on gender; so, something translated out of Radchaai defaults to she/her.

Posing herself the hypothetical question of what a particular character’s gender is, Leckie writes: “I probably don’t know. Because it didn’t matter to the story and because of the pronoun choice I’d made, I didn’t have to figure it out.” For Red and Blue, gender is just another layer, another tool in her respective arsenal rather than something wholly identifying.

What has made the time travel romance formulaic, it turns out, is not entirely rooted in gender. Since 1991, Diana Gabaldon has been subverting time travel tropes in her Outlander books, which includes reversing the traditional gender dynamics of the series’ core romance. Her traveler, Claire Beauchamp Randall Fraser, is a woman who passes back and forth between the 1900s and 1700s, while her highlander lover, Jamie Fraser, patiently moves through his own linear lifetime until she reappears—in one case, a full twenty years after the last time he lays eyes on her.

Jamie experiences what feels like a whole other lifetime in those two decades: full of war, a stint in jail, fathering a child and taking on more than one new identity. Yet when the Claire who left Jamie as a pregnant nurse two decades prior returns as a doctor and mother of their now twenty-year-old child, Jamie the soldier-turned-printer is ready to carve out room for her in his new life. In this case, Jamie is the one who waits for his time traveling love to return.

However, Jamie and Claire’s romance is still a heterosexual love story anchored in—and here’s the kicker—one party being active and the other passive. In most cases, that dynamic is gendered to the woman’s disadvantage: Time Travelers’ Wife’s Clare makes art and raises a child and hopes that she’ll get as much time as possible with Henry. When he gets pulled out of time on their wedding day, she instead marries his older self who steps in; she has no choice but to go with the flow.

In most cases, later in life, she doesn’t even know when she’ll encounter him again; she can only count on the notion that he has dropped in and out of her future as he did her past, his visits like little surprises (or love notes). Not possessing the Chrono-Impairment gene, the closest Clare comes to taking the reins of time travel is to, after Henry gets a vasectomy following several miscarriages of time-traveling fetuses, convince a younger version of her husband to try to conceive one more time.

Henry and Clare’s dynamic inspired former Doctor Who showrunner Steven Moffat to write the episode “The Girl in the Fireplace,” in which Madame de Pompadour herself waits on the Doctor for her entire lifetime. Yes, “waiting,” in this case, means that Reinette still becomes the king’s mistress and enjoys all manner of parties and acclaim in the meantime, but she is always glancing toward the mantel, hoping for another cameo from her “Fireplace Man.”

read more: Doctor Who Season 12 — Everything We Know

While mere minutes pass for the Doctor, flitting from room to room on a ship in the 51st century, months and years pass for Reinette, her heartstrings tied up in girlish hopes. Despite being intelligent enough to understand companion Rose’s explanation of time travel and sensitive enough to read the Doctor’s mind, when granted the opportunity to become a time traveler herself, a young Reinette falters: crossing over onto the ship and hearing her own anguished screams at age 37, attacked by clockwork androids, she elects to take the “slower path” and live in linear time.

By the time she reaches 37, survives the android attack, and is finally ready to join the Doctor, he makes the mistake of stepping back onto the ship for a moment… and when he returns, Reinette is dead, having succumbed to tuberculosis. In a letter she leaves for her “lonely angel,” she begs him to hurry back, despite the fact that she must have known he would never reach her in time.

read more: Doctor Who — What’s Next For the Show?

Neither Blue nor Red ever has to choose the slower path, instead darting upbraid and downbraid, following one another’s tracks, each time greeted by a taunting (later, tender) letter in lieu of the other’s physical presence. The closest either comes to a linear life are the missions in which Blue, in accordance to the Garden that grew her, embeds herself into missions that require her to live out an entire lifetime—sometimes even married—in order to plait the strands of time just so through her interactions with a partner and/or child. Red’s Agency treats its officers less as individual sprouts and more as points in a massive cloud, aware of their quasi-siblings as if they were supporting characters in one another’s dreams. In this way, as well as on her missions, Red too goes through countless lives in the scope of her career.

In response to those 2013 thinkpieces, author Charles Stross put forth his own consideration for why women were less likely to be travelers: if one treats time travel like any other form of tourism, historically, the fairer sex is more vulnerable when traveling alone in unfamiliar locales. Especially when it’s the far past, as Claire Fraser can grimly attest to after multiple instances of being labeled a witch—not to mention narrowly escaping countless attempted sexual assaults. Even poor Kivrin, the historian traveler in Connie Willis’ Doomsday Book, who prepares as well as she can to travel to the Middle Ages, is immediately labeled as an escaped nun; that’s the only period-accurate explanation for her knowledge and skill set.

Red and Blue are not tourists. They are professionals. Neither waits on the other for guidance or answers. They seek each other out, yes, lay playful traps, and spend generations cultivating missives in pieces of nature. But they do so as equals. Despite radically different upbringings and ingrained outlooks on what is the correct timeline, neither is subordinate or dependant in the relationship. They perform gender, and time travel, in as many different ways as the infinite iterations of blue that Red glimpses in the world, and the countless shades of red that Blue documents and treasures.

Henry and Clare, and Claire and Jamie, are part of the kinds of time travel love stories that establish the canon upon which all others are built. Red and Blue’s correspondence, preserved in this charming and incisive novella, explode those binaries into a color spectrum so vast that the eye is constantly discovering new shades the closer it gazes and the longer it looks.

Don’t like paper and ink? Check out these e-readers

Lucy Harker is the secret daughter of Dracula. As a dhampir, she uses her powers in service of the British Empire