An English translation of the original Spanish language piece.

Editor’s note:  This is a translation of Hemil Garcia Linares’ original Spanish language post, by the author.  The original can be found here.

The Wendigo, a novella written by Algernon Blackwood, is one of the most archetypical and fascinating texts created by the English author.

It seems really challenging for an author to address a “foreign theme”. We know that Blackwood was born South East of London. He lived in New York and Canada, which is precisely the whereabouts where the legend of the Wendigo is widely known. Blackwood then took a foreign legend and made it his own.

In this article, first, I will discuss the legend, secondly, I will focus on The Wendigo a classic horror novella by Algernon Blackwood. Moreover, I will also mention a recent thriller written by Vaugh C. Hardacker titled Wendigo. Finally, I would like to argue about the term Wendigo Psychosis applied in the field of psychology which is associated with the Wendigo myth.

Who/what is the/a Wendigo and where does this story originate? 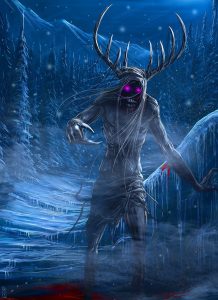 According to the legend, the Wendigo is the most terrifying of the evil creatures existing in the world of the Anishinaabe, originally from the United States and Canada. That indigenous group includes people from the Odawa, Salteaux, Ojibwe, Mississauga’s, Potawatomi, Oji-Cree, and Algonquin.

The Wendigo is a creature with human and animal shape (a manitou or elk) five times larger than the tallest human being. He has insatiable hunger and his bones are sticking out of his dried skin. His lips are full of blood from constantly eating human flesh. The creature is associated with the snow, the cold below zero, the North, the Algonquin culture. It is an evil entity that can possess a human being and force him to commit murder, cannibalism, and eat insatiably. The Wendigo can move at an impressive speed and before attacking his prey announces himself with a dense mist that causes an extreme cold.

In the book Native American Gods, Basil Johnson, a Canadian professor of the Ojibway dialect, dedicates a chapter to the Weendigo (Johnson spells the word with two e’s), a monstrous being who is never satisfied and the more he eats, the hungrier he gets. Johnson argues that today’s modern Wendigo is the lumber industry that cuts down the trees, leaving the forests as if they had been detonated by a bomb.

The Wendigo by Algernon Blackwood 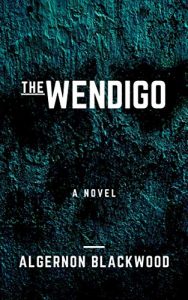 In this novella set in northwestern Ontario, two Scots, theology student Simpson and his uncle, Dr. Cathcart, author of a book on collective hallucinations, go hunting moose with guides Hank Davis and the Frenchman “Canuck.”, Joseph Défago. They have an aide named Punk who is a native Canadian, in charge of the kitchen and the main camp.

Two hunting parties are formed: Dr. Cathcart goes with Hank, while Défago guides Simpson in a canoe, to explore downstream.

Simpson and Défago go camping and the latter thinks he feels a strange and terrible smell in the wind. At night, Simpson wakes up to find Défago terrified: there is something outside the tent. Later, Défago runs off and Simpson goes out looking for him. He follows Défagos tracks in the snow for a couple of miles and realizes that Défago’s are not the only traceable tracks. There are other tracks that do not look human and it gradually seems that Défago’s own tracks join the other tracks, animal tracks perhaps? Simpson thinks he has heard Défago saying:

“Oh! Oh! This burning height! Oh, my feet of fire! My feet burning with fire …!”

This rhyme of the English is not repeated in the Spanish translation. It is difficult to accurately translate a regional way of speaking: the grammatical construction and accent of the rural characters in El Wendigo.

Here are some examples:

That particular syntax and accent cannot be reproduced as is. The way the characters speak in The Wendigo ‘transports’ us vividly to the mountains and rural areas of Canada, while the best translation only ‘brings’ us closer to that region at the most.

Algernon takes the reader through the forests of North America, creating an atmosphere of dense horror, in the middle of the night, until he reveals to us that the existence of the Wendigo is real. 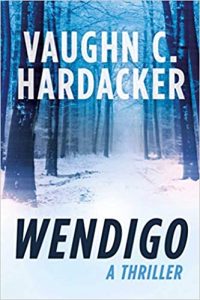 The novel opens with a grandfather descent of the Madawaska Maliseet First Nation, telling his grandchildren about the Wendigo and his tricks to catch victims and devour them. This story, told verbally, takes place in 1683 and ends with a moral message: “that is why you all must always be good children… the Wendigo comes in search of bad children. It has always come and will always come”. This narrative is not directly linked to the novel itself, but it generates expectation and also a proper atmosphere of horror to the reader.

After the folk tale, the novel goes back to our current era of cell phones and computers and the wildlife in a rural area of ​​Maine (United States), next to the Canadian border. Here is a synopsis of the novel,” For John Bear the Wendigo was merely a scary story his grandfather used to tell him. That is, until a man is found dead in the deep northern woods of Maine, butchered like an animal and with his heart cut out. And the only tracks they can find are massive footprints that couldn’t possibly be human. Now, John is sure that what is stalking the inhabitants of their remote outpost is a Wendigo, even if no one else believes it. He must stop a monster he once thought was nothing more than a tale to warn children”. 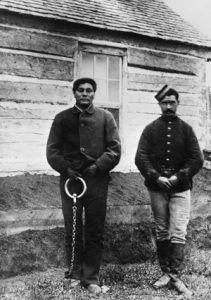 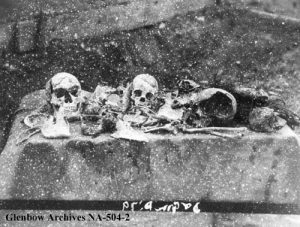 (pictures from the Glenbow Archives)

According to the American Psychological Association (APA) dictionary, Windigo Psychosis is a severe culture-bound syndrome, which occurs among native Algonquians living in southern Canada and the northeastern United States. The syndrome is characterized by delusions of being possessed by a carnivorous monster (the windigo) and manifests itself in symptoms including depression, violence, a compulsive craving for human flesh, and sometimes actual cannibalism.

Swift Runner was a Cree native, considered to be intelligent and trustworthy, a reputation that earned him a job as a guide for the Northwest Mounted Police. But, as one newspaper later noted, “His contact with white men, however, ruined him.” Note: Swift Runner stated this during an interview.

Swift Runner was well known in the settlement of Fort Saskatchewan, a man of an impressive 6 feet 3 inches with a robust build whom one policeman called “as ugly and evil-looking a face as I have ever seen.”

Swift Runner lost his job due to alcohol problems. He left town and went into the forest with his family and after a while he returned saying that his five children had starved to death and that his wife had committed suicide. The police did not believe his story because Swift Runner weighed more than 200 pounds and had no signs of starvation. After several interrogations, he confessed his crime.

According to Pruden’s article, “Swift Runner was tried for murder and cannibalism by a jury that included three “English speaking Cree half-breeds,” four men “well up in the Cree language,” and a Cree man who translated the proceedings. A leading Cree English scholar was also brought in to observe the trial and ensure Swift Runner knew what was being said.”

No evidence was presented in Swift Runner’s defense. When asked if he wanted to say something, he replied, “I did.”

The two novels about the Wendigo have seduced me and reading about the ill-fated Swift Runner (there have been other cases of Windigo Psychosis) has renewed my interest in the legends on this side of America. Once there aren’t traveling restrictions and it is safer to travel, I am driving up North to Niagara Falls, Up-State New York, and Canada and visit a Native American Reservation to gain personal experience and write about the Windigo.

Review: Ant Man and the Wasp – Any sign of Avenger fatigue?