This article was sponsored by Tor. The opinions expressed are our own.

Debut novels are rarely as fun and well-realized as Drew Williams’ The Stars Now Unclaimed, an action-oriented science fiction novel that follows a ragtag crew-of-circumstance as they fight to keep the galaxy safe from the Pax, a conquering force that believes the strong are deserving and the weak deserve only to be ruled.

The novel is told from the perspective of Jane, a member of The Justified and The Repentant, one of 17 species in the galaxy. Her job as a Justified operative is to collect children with supernatural gifts and bring them back to the Sanctum for schooling and training. When the book begins, Jane’s ship, Schaz, is just setting her down on the backwater homeworld of one such gifted child: Esa, a teenaged telekinetic orphan.

Williams doesn’t waste anytime throwing us into the non-stop action of Jane’s world. At over 150 years old, our main character is a skilled fighter, pilot, and strategist, but the Pax are right on her heels, also looking to capture Esa and use her for their own purposes. As Jane works to rescue Esa and bring her back to her own homeworld, she manages to attract a motley crew, including ex-boyfriend and exiled Justified operative Javier; fellow Justified operative with information vital to the war with the Pax, Marus; and, of course, teen orphan Esa, who has previously never been off her homeworld and is now hurtling through space.

Many of the plot elements in The Stars Now Unclaimed are reminiscent of Firefly, as well as other space adventures: the reluctant crew thrown together by a common enemy; an all-powerful, seemingly benevolent organization working to “fix” the universe; and an anger-driven force of barbarians. There’s even a character named Preacher—here, an android species known as the Barious. While Preacher may share a name and the trait of a mysterious past with the Firefly character, her interests in robot revolution reminded me of the woke droid, L3-37, in Solo: A Star Wars Story. Here, the robot character critical of human-robot relations, specifically the enslavement of the latter by the former, is much more nuanced and whole. Her barbs are not played of as jokes, but rather real, valid character moments and complaints. It’s a breath of fresh air after the well-intentioned, yet ultimately horrifying arc of the Solo character.

Williams is extremely skilled at world-building through action, plot, and character. The exposition is rarely overdone, with the device of Jane explaining things to the young, galactically-sheltered Esa working particularly well for doling out information about this world. One of the most effective aspects of this novel is the central premise of its setting, which is that the galaxy was hit with something called “the pulse” roughly 100 years prior to the story’s start.

The pulse affected the technology on planets across the galaxy to varying degrees, knocking some planets back to pre-spaceflight technology or even pre-electricity, while leaving other planets entirely unaffected. Radiation from the pulse still affects planets that were knocked back further on the technology spectrum, which means they are unable to develop certain kinds of technology and, if you are a visitor from another planet with more advanced technology, it will quickly become inoperable at an exponential rate. It’s a very cool premise that gives each new location visited on Jane’s journey across the galaxy its own, distinct flavor, as well as a deeper mystery to the galaxy at large.

While the action-oriented nature of the plot can get a bit exhausting at times, the more than 400-page book is never boring, with Jane and her ever-evolving found family thrown into crisis after crisis. It’s rather cinematic in the way it all unfolds, and is well-balanced with excellent character work. I particularly liked learning about the personalities of the various Justified ships, from the sarcastic, yet accommodating demeanor of Jane’s ship Schaz to the endlessly upbeat ‘tude of Javi’s ship Bolivar. The depiction of ships’ AI personalities reminded me a bit of Farscape’s Moya, while the relationship between Justified operative and Justified ship was a milder, less symbiotic version of the human-daemon relationship from His Dark Materials, with operatives “raising” their ships from the time they are young, shaping their very personalities. In turn, the ships are intensely loyal to their pilots.

It is well-realized world-building elements like this one that make spending time in The Stars Now Unclaimed universe so damn diverting. It’s a world that feels lived in filled with complex characters with their own, developed backstories. While the stakes may be high, the action sometimes brutal, and the complex institutional politics uncomfortably unfamiliar, the novel is a lot of fun. It’s the perfect sci-fi reading for fans of action-driven adventures like Firefly, Star Wars, or Farscape.

The Stars Now Unclaimed is now available for purchase via Amazon, Macmillan, or your local independent bookstore. 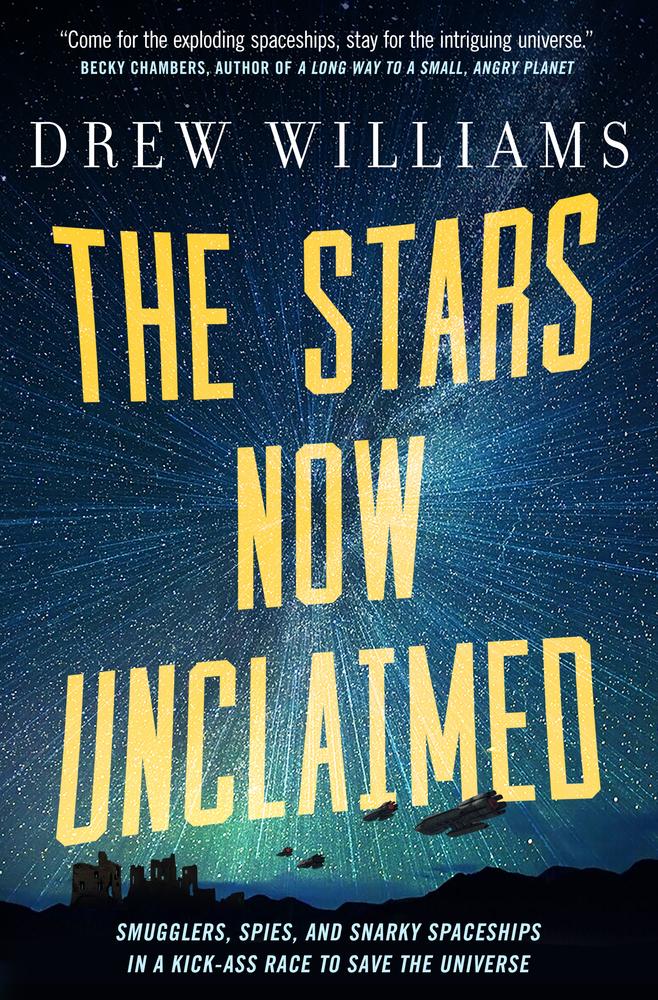 We’re starting to tease clues about our newest book!

Do YOU have a time machine? Those of you who don’t, take advantage of this limited time price reduction NOW. (No silly, not for a time machine, for John Stith’s Tiny Time Machine novel!