A few years ago, I had the privilege to work on a game being built for Star Trek: Discovery (I will remain salty about the cancellation of this game until the day I die).  While that game ultimately never made it to market, it gave me a chance to do a number of deep dives into one of my favorite properties.  While we were in the early days of building the game design bible to give to the writers, I came up with a list of recurring broad plotlines that seemed to show up in every variation of Star Trek (and many other SF shows including Dr. Who, Stargate, etc.).

Now that Star Trek: Picard is on the air, I’m working my way down the list, watching to see which of these thirteen recurring plots show up.  If you have any other to add to the list, put them in the comments below and we’ll see how long it takes Picard to get to them. 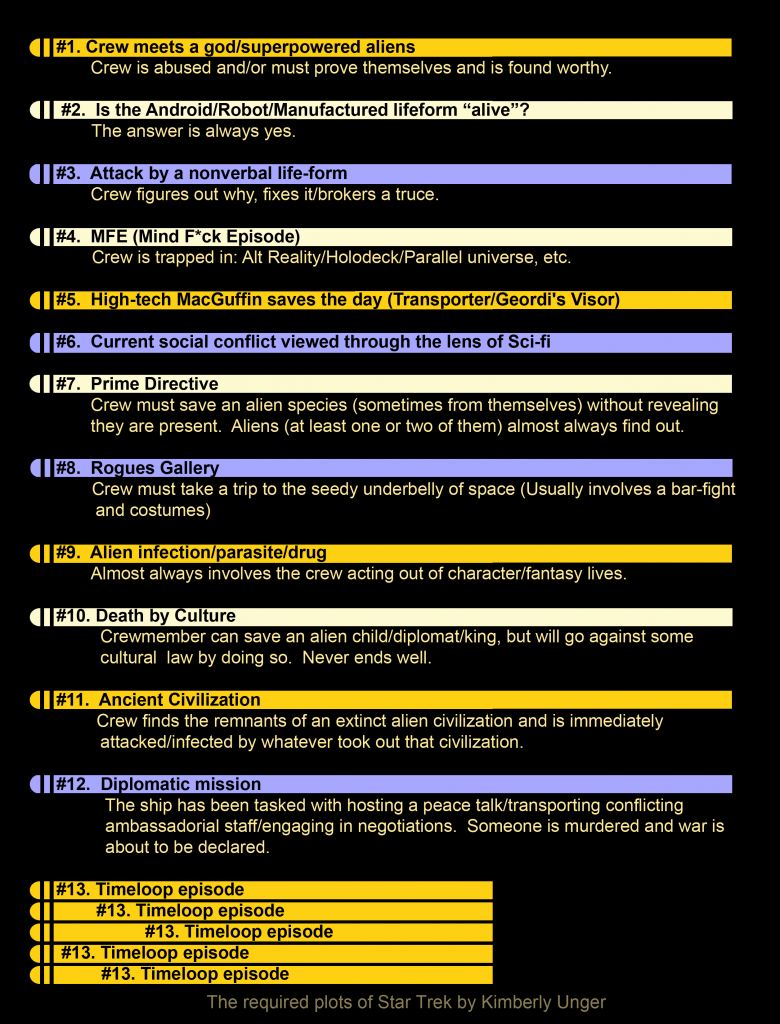 These are by no means stand-alone elements.  They can be mixed and remixed as primary plots, subplots, overarching seasonal plots. In fact, #1 is essentially the ENTIRE overarching plot for the entire run of Star Trek: The Next Generation, and #2 is looking like it’s the primary plot thread for at least the first season of Star Trek: Picard (although my money is on a reversal back to #1 once Q shows up).

We all recognize these episodes when they pop up and they bring with them certain expectations of outcome, of tone and viewpoint.  They almost always involve significant character-building moments as they are often used as a breather between long stretches of driving the seasonal plot forward.  Despite my categorizing these recurring story ideas so coldly, they often drive some of the most “science-fictional” storylines. The audiences familiarity with the framework can allow Star Trek to do the heavy lifting on examining the kinds of What If ideas without having to spend quite so much time onboarding the viewer.