Today Steve Davidson, our esteemed editor, sent me an e-mail with this juicy quote from Terry Prachett: “I’ve always liked the idea of a special Hugo to be awarded (by force, perhaps) to literary authors who write books dripping with themes filleted from mainstream SF and then deny that it’s science fiction ‘because it’s not about robots and spaceships’.” Of course, Steve said, “What a great idea!”

We all know that “mainstream” writers have, for years, been writing borderline science fiction stories and novels, using all kinds of tropes and conceits that any reader of science fiction would recognize as belonging to hard-core science fiction. One of my favorite novels in this category is from a Nobel Prize winning American author Sinclair Lewis, whom practically no one reads anymore. He wrote Babbitt, Arrowsmith, and Elmer Gantry, among other vital classics, but it was his 1935 novel, It Can’t Happen Here, that caused a lot of controversy.

Lewis was on the political left during the Great Depression and he feared the dictators (and demagogues) of the 1930s–both at home and abroad. In 1935 he wrote a tale of an American populist and firebrand speaker who becomes president (modeled after Huey P. Long), who then turns casually and suddenly totalitarian and crushes newspapers, shuts down radio stations–all in the name of patriotism. (Think: Patriot Act, the prison at Guantanimo Bay, and the denial of habeus corpus–all of which George Bush started but continue to this day). These things do happen And the can happen to us, regardless which member of the GOP proclaims American Exceptionalism. Our exceptionalism could just hoodwink us. (And as Thoreau points out in Walden: “The commonest sense is the sense of men asleep, which they express by snoring.” We are exceptional, indeed.) It Can’t Happen Here is a clear alternate-history novel, just as much an exciting read as Philip K. Dick’s The Man in the High Castle. Recently Philip Roth did the same thing for the 1930s in his 2004 novel, The Plot Against America. In that book a small ordinary family (similar to the one in It Can’t Happen Here), but this time Jewish, is beset by the larger misfortunes of Charles Lindbergh who is an isolationist and an anti-Semite who defeats FDR int 1940.. Like the white Americans on the west coast of California in The Man in the High Castle, Philip Roth’s family in The Plot Against America suffers from antisemitism run rampant. The War Against America is one of Roth’s clear masterpieces and should be read by all science fiction aficionados, especially those who love alternate history novels.

Of course, there is also Margarete Atwood with her two science fiction novels, The Handmaid’s Tale (1998) and Oryx and Crake (2004). Both are clear science fiction, and the former an outstanding classic that rivals 1984 in its profound societal control (and contempt) for sexuality, but especially for young, beautiful–and fertile–women. Oryx and Crake is more of a dystopian novel, part of a  trilogy with The Year of the Flood (2009) and the recent MaddAddam (2013). Anyone reading them would recognize them clearly as works of science fiction or works that should be called science fiction. I would add one other major female mainstream writer to our list who has written flat-out science fiction. Doris Lessing (another Nobel Prize winner) has written five masterpieces collected under one title: Canopus in Argos: Archive. Collected in a large volume, it can seem a daunting read, so I recommend that you find them individually and read them as I did, one at a time. The novels are: Shikasta (1979), The Marriages Between Zones Three, Four and Five (1980), The Sirian Experiments (1980), The Making of the Representative for Planet 8 (1982), The Sentimental Agents in the Volyen Empire (1983).

I would also add one final novel here (there are many, many others–but these are the ones that come to mind for this article). Kazuo Ishiguro’s Never Let Me Go (2005) is clearly science fiction. It details a “school” for children who are raised so that regular Londoners can harvest their body parts later on in the future. If you’ve seen the movie The Island you get the idea. Science fiction all the way. (Actually, Never Let Me Go is full of flaws and could never be published in America as science fiction: The children, their parents, no one in British society complains about the program, which isn’t particularly secret, and none of the characters take any kind of action to resolve any kind of conflict. It’s a profoundly undeveloped novel. It does, however, suggest the differences between British writers and American writers. In the mainstream, British characters tend to be acted upon; American characters take action. That’s a blanket-statement, I know, but I’ve taught enough of both for over 30 years to know the difference. What do Ewen MaGregor and Scarlett Johanssen, two clones ready to be harvested, do? They take action. Run away. Come back. Destroy the place. Americans in action! But not in Never Let Me Go.)

So. Mainstream writers (i.e. writers of literary fiction) deserve an award every year if they write a science fiction novel. I would call it The Outsider. This award would be for those writers in the mainstream who are writing clear science fiction but refuse to have their books labeled as such or sold as such or advertized as such..Because herein is the rub: No mainstream writer would want such a label, and no publisher of their work would allow it. This is because science fiction doesn’t sell as well as regular fiction, and there are status consequences in the academic world to be labeled a science fiction writer. (I speak from experience here.) There is a lot of shame out there about being labeled a science fiction writer. Just ask Harlan Ellison who for years simply has wanted to be known as a “writer” or a “storyteller”, yet his entire career has flourished well within the science fiction community and he has won all the major awards the field has to offer.

Still, it’s a grand idea–to award a novel The Outsider (or call it what you will). I would suggest giving the award a serious title so that it might have some sort of credibility, or at least confer upon those who have chosen it to be the best of the year some sort of credibility. But no author in the mainstream would ever cop to being called a science fiction writer or of even having had written a clear-cut science fiction novel. Before he died, Norman Mailer once said he was planning on writing a science fiction novel (a family epic about going to the moon and Mars). And it’s clear that Thomas Pynchon has written some of the best science fiction in his masterpieces, The Crying of Lot 49, Gravity’s Rainbow, and the more recent Against the Day, which any steampunk fan would relish. (Pynchon would probably relish such an award. After all, while no one knows what he looks like, he has appeared on The Simpsons.) 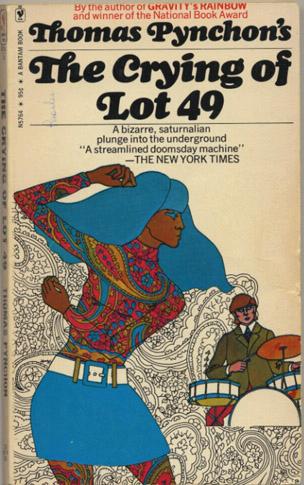 So let’s think about this. The Outsider is a good start. Or perhaps The Perihelion. Something like that. I’m sure there are better names for such a device. But I’m also serious about calling the award for what it is: the best science fiction novel by an outsider, a writer outside the field who would never, ever admit to having written science fiction who just did it.

(Ed. Note: Just such an award is being contemplated at this very moment by the staff of Amazing Stories. Emails have been sent to the proper authorities.)