It’s the 1960s in Greenwich Village; aliens have invaded and there’s a kid in the park creating psychedelic butterflies out of thin air. In other words, just a regular day in the village. 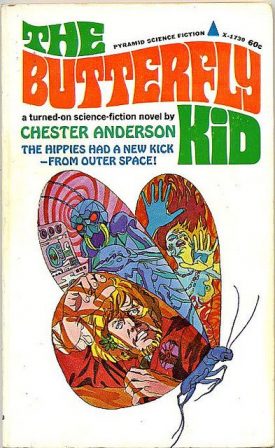 A long time ago – 1978 to be precise (if precision is what you’re after) – a time much closer to the events that the novel in question harkens to – I lived a life as close to Bohemian Faux Hippy as it was possible to live in those days.

In other words, I was a college student, living in a dorm, frequently traveling to other locales where I would hang out with others more focused on “experience” than on establishment concerns (read – earning a living).

One fine day a force of nature wandered into that scene in the form of my own personal Matthew the Theodore Bear, in the guise of none other than itenerant photog, guitar player and ambassador for MinnStF fandom – Fred A. Haskell (now Levy-Haskell).

I am sure that at some future date, some time closer to the heat death of the universe than we presently are,  Fred will find a way to forgive me for dragging him in to all of this.  But it’s his fault, really, and there’s no way he can honestly duck the responsibility.  Fred, you see, was the instigator.  It was he who handed me a copy of Chester Anderson’s The Butterfly Kid.  Not only did Fred hand me the book, he insisted that I read it.

The Butterfly Kid was nominated for the Best Novel Hugo Award in 1968.  It joined the ballot with the eventual winner, Zelazny’s Lord of Light, along with Delany’s Einstein Intersection, Anthony’s Cthon, Silverberg’s Thorns, all of which I have dutifully read.

According to available records it finished in fourth place.  All these years later I’m pretty sure that one of the other nominees would be picked as the winner (different ones in different years), though I strongly suspect that TBK would still not earn the top slot, Although I do believe it is worthy.

I think this would largely be owing to the fact that while the story is great, the characters an interesting mixed bag of a certain type and the writing exemplary (Anderson had a way with metaphor, I must say), it features an era, a moment in time and place that is gone, one that despite loads of free press coverage, remains, strange, foreign, mystifying, scary and distant to most – the Greenwich Village scene of the 60s.

I got to live and hang out in that scene during its final days of its fading away.  Mostly with the theater crowd working off-Broadway.  Everyone was doing their own thing, baby, days of hunger interspersed with days of discovery (often the same days); a time of crash pads, forlorn underground presses, catered sit-ins, purple micro dots and fading paisley.

It was fun, but nothing like its glory days, and certainly nothing like the world depicted in Anderson’s tale, a world in which the height of the counter-culture 60s (the establishment 60s only appears in cameo) lifted whole and placed in some off-shoot futurity where a war has ended, pot is ubiquitous and society is precariously balanced between Timothy Leery and Richard Milhouse NIxon.

Chester Anderson is both the author and narrator of this story; Michael Kurland, author of the novel’s first sequel (The Unicorn Girl) is Chester-the Narrator’s close friend and fellow instigator in both the novel and in real life.  Their relationship is recounted in such a familiar and airy way that it is possible to believe that many of the scenes and much of the dialogue were drawn from their “real life” interactions.

It is also possible to believe that The Butterfly Kid is not merely a fictional tale, but rather, a fictionalized recounting of events that actually took place at some time during the 60s in Greenwich Village, where something as outrageous as an invasion of the Earth by Blue Lobsteroids, intent on conquest and the extermination of the human species, was foiled by drug-infused, coffee-house band playing, free-loving and fashion-setting hippies, all of it going unnoticed and unremarked upon because in those days, an invasion of the Earth by intelligent blue crustaceans was just not bizarre enough to warrant a headline.

The novel is a romp;  Anderson plays it out to the fullest, offering comentary on (then) contemporary society, a few cracks at the SF genre itself, glancing takes on the Viet Nam war and no small endorsement of the counter-culture.

It is also, I think (and have only lately come to realize) a comment on the use of “mind-altering substances”, making the case that like any other human technology, they can be used for good, or for evil (or just for fun).

On the other hand, the time and place depicted in this novel may be distant enough that some of the settings and references will not be familiar enough with contemporary readers that they’ll miss some of the “in jokes”.  If that’s the case, consider it a history lesson.  Because despite that possible hiccup, the novel is fun, funny, a brisk read and offers what one can perhaps refer to as New Wave Cross Over science fiction.  A novel that has a leg in both camps of the genre, written at a time when the New Wave was a ‘thing’.

It also offers one of those rare instances where “magic” via technology illustrates the uneasy divide between SF and Fantasy.

In brief, The Butterfly Kid involves a psychedelic rock band (electronic harpsichord in the lead), trying to foil an invasion of Earth by blue lobster-like aliens (what else?) via the introduction of “reality pills”, euphoric, hallucinatory pills that allow the user’s hallucinations to manifest in reality (certainly a precursor to the Matrix) and causing confusion, chaos and not a few inappropriate public displays by members of the establishment along the way.  (This is inevitably what happens when you hallucinate the god of lust into reality.)

I think perhaps the greatest, if convoluted endorsement I can offer is the fact that after reading The Butterfly Kid for the first time, I made a pilgrimige to NY’s Croton Resevoir (water supply for New York city) to check out what should surely be a location listed on the registry of Historic Sites.

But you’ll have to read the novel to find out why.

Michael Kurland recently announced that the Greenwich Village Trilogy, of which The Butterfly Kid, Kurland’s own The Unicorn Girl, and T.A. Water’s The Probability Pad comprise the individual works, is being re-issued in a matching set, after having been out of print for FAR too long.

All three are available via pre-order –

The Butterfly Kid
The Unicorn Girl
The Probability Pad

How can you not want to read a book titled Cyborg’s Secret Baby? That’s even better than Secret Baby Cyborg….

A Coordination Game in “The Isolinguals”