I don’t really give much time or thought to the intricacies of genre, except when I’m trying to pick the best  classification codes and key words for my book at a vendor. I want to help the readers find my book and have a fairly good mutual expectation going on as to what they’ll be reading from me. I hope they’ll enjoy the story and not be disappointed.
I think I write science fiction romance with adventure.  Or maybe it’s space opera with space marines and romantic elements… Or else ancient Egyptian paranormal fantasy romance with adventure. Unless we’re calling it Ancient World Romance with fantasy elements. Luckily I guess, no one is trying to slot my books on any shelves at their local bookstore! The world doesn’t have nice, neat boundaries any more, if indeed it ever did. I usually have some mythical, mystical or fantastical elements in my scifi romances. While there’s no science fiction in my ancient Egyptian tales, they sure can’t be classified as ‘historical romance” because I take a lot of liberties with details (but backed with in-depth research so I know what I’m changing) and proudly so state ahead of time. Fantasy! Or maybe Paranormal….

I’m livin’ in the wide open frontier of book genre classification and loving it! (Except for certain vendors/promo sites/contests who stubbornly do not have a science fiction romance or romance=> science fiction category. I mean, how hard IS that???) 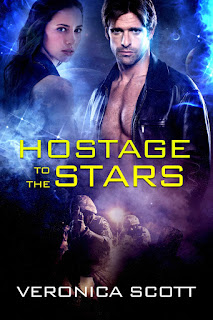 Here’s my latest new release, Hostage To The Stars, just out this past week, primarily scifi romance/adventure/suspense with a touch of mystical at one point.

He rescued her from space pirates … but can he keep them both safe from the far greater evil stalking a deserted planet?

Space travel without Kidnap & Ransom insurance? Not a good idea. University instructor and researcher Sara Bridges can’t afford it, so when pirates board her cruise liner, she’s taken captive along with the mistress of a wealthy man, and brought to a deserted planet. When a military extraction team sent to rescue the mistress refuses to take Sara too, she’s left to the mercies of a retired Special Forces soldier, along as consultant.

Reluctantly reactivated and coerced into signing up for the rescue operation to the planet Farduccir where he once was deployed,  Sgt. Johnny Danver just wants to get the job done. But when the team leader leaves one captured woman behind, he breaks away to rescue her himself.

As Johnny and Sara traverse the barren landscape, heading for an abandoned base where they hope to call Sectors Command for help, they find villages destroyed by battle and stripped of all inhabitants. A lone survivor tells a horrific tale of the Sectors’ alien enemy, the Mawreg, returning after being pushed out …

Searching for evidence to give the military, Johnny is captured. He regains consciousness in a Mawreg cage–with Sara next to him. Death is preferable to what the aliens will do to them… And even if they do escape their captors, can they alert the military in time to prevent another invasion of the Sectors?

Standalone sequel to Mission To Mahjundar (mild spoilers for Mahjundar in this story.)

New Dr. Seuss Found in a Box comes to print

Kinesics is the study of “body language”, which explores how movements and gestures project a person’s hidden thoughts. Blushing is an obvious reaction. But more subtle ones can be used. When body language contradicts verbal expression, tension, conflict and interesting scenarios increase. This is a great opportunity for writers. According to Janet Lee Carey, author […]