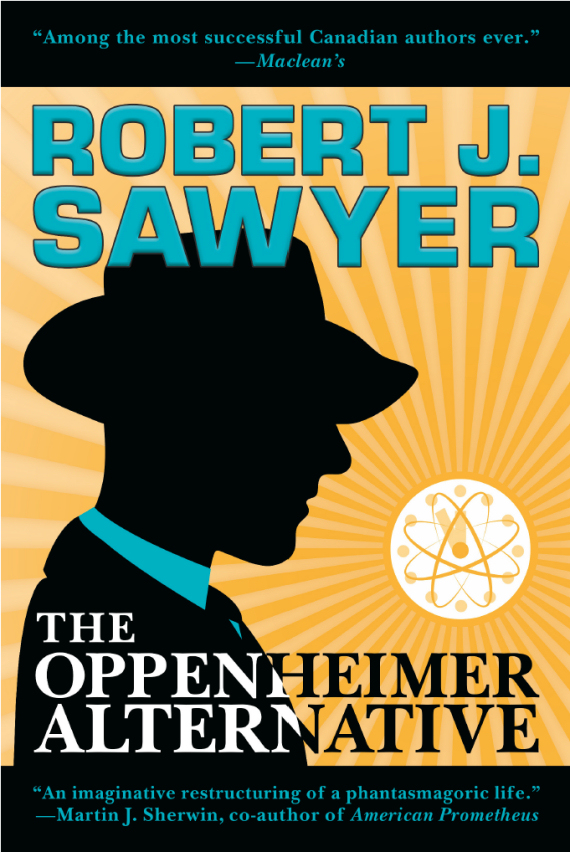 For a science fiction fan, a new book from Robert J. Sawyer is a cause for celebration, and not just because he is one of Canada’s top SF writers. He’s a top Canadian writer whose forté is SF, if you get my distinction. And as far as I know, he only writes people-oriented plausible SF; he gets better at it as time goes by. The new book, The Oppenheimer Alternative, is such a book and extremely enjoyable. If you’re not at all knowledgeable about American history—specifically “atomic age” American history, about the development and use of atomic energy in (and leading up to) World War II, this book will, for better or worse, make you so—and not in any dry, didactic way. Heck, even if you know all about the development of America’s first atomic bombs, this book will bring that era (which stretches from the nineteen-thirties up to the nuclear non-proliferation treaty) to life.

Even though there’s a disclaimer about these being characters with the same names as some of the world’s greatest and best-known physicists and mathematicians, it’s clear that Sawyer has done his homework, and whether the real people spoke the exact same words, or thought the exact thoughts, this is what they were really like, and how they really thought, talked, and acted. (The bibliography alone is well over a hundred books; not many works of fiction can boast that large a section.)

Whether you were brought up, as I was, in a time when schools taught about people like Enrico Fermi, Ernst Schrödinger, Albert Einstein, Neils Bohr, Kurt Gödel, Wernher Von Braun, or whether you have just a dim recollection of hearing about these people, they will live for you after you are done reading this book. For the first two-thirds of this book, which is the part that is “historical,” as opposed to the “science-fictional,” part, you will learn all about men who are in the pantheon of top world scientists, physicists, mathematicians, and thinkers. (Many of the people/characters in this novel are Nobel prize recipients.) Just the historical part is a brilliant bit of writing—you will come to know J. Robert Oppenheimer, the main protagonist, as a person; and you will learn about America’s development of, and use of, atomic weapons.

And all that is just the lead-in to an extremely clever science-fictional tale that grows naturally out of the research done by these extremely smart people on the way to the development of the atomic age. You will also learn a bit—if you didn’t already know—about the planet Mars, which figures in the latter part of the book and, it appears, which many people today still don’t know. (For example, the crossword puzzle I completed two days ago had a clue [64-down] “Features of the planet Mars”; the answer was “CANALS”! I’m not making this up. Many people seem to still think Mars has canals.)

You may or may not know, or remember, that “Oppie” (as his friends called him) Oppenheimer led the Los Alamos project in New Mexico that led directly to the development of the weapons that destroyed the Japanese cities of Hiroshima and Nagasaki; you may or may not know of the moral quandaries that these projects put many of the scientists working on the projects into—they knew that they were developing weapons that might shorten the war; a war that for the Americans had already dragged on for years (and the U.S. was a latecomer to the war; people like Charles Lindbergh had argued against any U.S. involvement at all in the war). The moral question wasn’t just “hawks and doves,” either—many of the world’s (and therefore, the U.S.’s) greatest scientists and thinkers were Jewish, and Jews were being directly targeted by the Nazi war machine; so for them there could not be a question of non-involvement, especially after so many were forced to flee Europe for the safety of North American soil.

The personal lives of these people, and their own quirks and interactions—plus the growing anti-Communist sentiment of the ‘40s and ‘50s—changed a lot of lives and political futures as well; Oppie himself was forced out, post-war, of the very group he had led, by Edward Teller (“The father of the H-bomb”) because of politics. (Teller and Oppie had a long and complicated relationship; during the war years, while Oppie’s team was developing the A-bomb (to simplify things: the A-bomb’s [atomic bomb] destructive power—the kind of bomb dropped on Hiroshima and Nagasaki—was measured in kilotons, or thousands of tons of dynamite/explosive equivalent, while the “H-bomb” (Hydrogen bomb) that Teller’s group developed was measured in megatons, or millions of tons of explosive. Teller wanted to develop his “super” bomb, but the team went for the simpler and easier-to-develop A-bomb.

Whether you had cared or not, previous to reading this book, about the lives and thoughts of the people involved in these projects, you definitely would know them as people after reading it. (And again, all this historical fact is groundwork for the major science-fictional turn of the book; I’ll get to that shortly.) They become real to you; even Wernher Von Braun, who I used to be neutral about, I have learned to despise somewhat. You may only know of him through his Disney-fied rockets; my friend Verna Smith Trestrail used to proudly display a blinking LED necklace he’d made and given to her father (E.E. “Doc” Smith). I knew vaguely that he’d designed the V-2 rockets that devastated London during the second World War—and, of course, through Tom Lehrer’s devastatingly sarcastic song about him (“A man whose alliegiance is ruled by expedience”). But through this book, I learned that his obsession with rocketry (and his German patriotism) overruled any consideration of what was being done with those rockets he’d designed. (“Once the rockets are up, who cares where they come down? That’s not my department,” says Wernher Von Braun—Tom Lehrer).

Anyway, you learn about these scientists and their obsessions, some of which are a major part of the science-fictional part (the extrapolation is also as brilliant as the history) of this novel. Both rocketry and atomic energy figure in the problem and the solution to the problem; because of Teller’s obsession with his “super” bomb, and Hans Bethe’s obsession with the core of our sun, as well as Richard Feynman’s (Figure 4) wanting to get confirmation from Einstein and/or Leo Szilard for his obsession with the positron, it all comes together near the end of the book to present a solution for the problem posed by the book. (Don’t worry if you don’t recognize these names; by the end of the book you’ll know them and the people they represent quite well.)

Oh, right, I promised to tell you what the problem was, didn’t I? Well, during the whole lead-up to creating the bomb, several sets of solar spectrographs were taken at various years, leading Bethe and Teller to come up with entirely different readings of what the core temperature of the sun was, and what the core of the sun was composed of. (For more information on solar spectrographs, click the link above.)

Well, after the war, a solution is found for the differing spectrographs, which was not a happy thing: it appeared that the sun was not as stable as previously thought; the differing spectra meant that the sun was going to throw out some gas in an attempt to stabilize its core, and that this would happen some time between, say, 2020 and 2050. It certainly wouldn’t be as bad as the sun going nova, for example, but it would be bad enough that everything from the sun out to about 1.4 A.U. would be sterilized; boiled off down to a rocky core. (If you’re not familiar with the Astronomical Unit, the Earth is at 1 A.U. from the sun.) which means that unless some way could be found to shield the Earth from this outgassing incident, we were all going to die.

Needless to say, this was not going to make people very happy; a decision was made (by politicians and the military, not by scientists) to shield the public from this unhappy fact, to prevent mass hysteria of the sort that was engendered by Orson Welles’ War of the Worlds radio broadcast years earlier—or worse. (The conflict between science, the military—mostly in the person of General Groves, the man in charge of Los Alamos—is well portrayed, with some scientists [Teller] saying that the military should be the ones to decide what should be done with atomic weapons; and some [Oppie and others] saying not… another source of friction between the two.)

And Project Orion—a project using atomic (or hydrogen) bombs for propulsion instead of rockets—had been scuttled by the Nuclear Nonproliferation Treaty of 1970; Orion could have been a way to move people off the Earth to, say, Mars, to save a significant number of people (Mars is beyond the 1.4 A.U. limit for the outgassing) and therefore, the human species. Project Orion, by the way, was real, and was really killed by the NPT, which forbade experimentation even in outer space.
It was a pretty conundrum which was brilliantly solved by the end of the book and no, I’m not even going to hint at how. Just take my word for it that it all fits, and all of it was properly set up earlier in the book. This is probably my favourite Sawyer book of all he’s written; but then, I like “pure” SF. The writing is extremely clever and should appeal to all levels of SF readers, from those who will get all the “in” jokes or references to those who won’t even realize they’re there. This book is a solid award contender!

Oh, and before I forget… the Canadian Prix Aurora Awards are opening for votes next month. Just a quick reminder.

Come on, folks, comment on this column! Comment here, or on Facebook, or by email (stevefah at hotmail dot com). Let me know what you think of this, please. (Just keep it polite, okay?) My opinion is, as always, my own, and doesn’t necessarily reflect the views of Amazing Stories or its owner, editor, publisher or other columnists. See you next time!

A review of the latest issue of Speculative North magazine

How I Stopped Worrying and Learned to Love Manga