The Robots of Gotham is a fantastical futuristic ride, full of intrigue and intriguing tech. 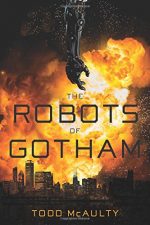 This review is going to have multiple openings:

Take one part Alice in Wonderland, one part The Wizard of Oz, knead thoroughly, roll out to an even consistency and then place in your Easy Bake Thought Machine until the surface is golden brown.  The resulting confection should please just about everyone, with or without butter.

Larry Niven was a master of the technological red herring;  his stories invited the reader to speculate on the logical reasonings of often inscrutable aliens along with his characters – and both they and the reader frequently arrived at incomplete or incorrect assumptions, carrying the story into newly discovered and uncharted waters.  McAulty manages the same trick, this time with robots and artificial intelligences. 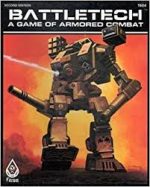 I first fell in love with giant Mechs when I saw this cover for the FASA game Battletech – even though I know such things are militarily impractical;  The Robots of Gotham offers some tantalizing glimpses into how and why such technology might one day find its way to the battlefield.

When was the last time you read a book that offered up a completely new and unique vision of the ways in which artificial intelligence might come to be, and how humans and autonomous robots might interact and form societies?

Confession:  I initially bounced right out of this book (which, full disclosure, was provided to me for review purposes).  While it opened with a slam-bang action scene crafted to hook the reader, there were a couple of disconnects (for me) that suggested that reading the remaining 674 pages was going to be a disappointing slog.

I set it aside:  over the past few years I’ve moved from religiously finishing any book whose cover’s I’d cracked to ye olde slushreader’s methodology:  if it doesn’t grab me by the end of the first page – or, worse, turns me off for some reason – it’s onto the rejection pile and off to the next thing.

Such would have been the fate for TROG had it not been for the intervention of social networking.  (Finally I have found a useful purpose for that scourge of humanity.)  I requested suggestions for reads on Facebook and someone mentioned TROG;  I responded that I’d bounced off of it and several others told me to give it a second chance.  I told them I might.

And then the author private messaged me.

Surprisingly, he did not do so to excoriate me for bad taste, or for being a failure as a reader;  he didn’t complain that my comment would endanger his Amazon best seller status, didn’t attack me for being a fake fan, did not call my ancestry into question nor suggest what my sexual proclivites might be.

He asked me to try and explain to him what had bounced me out of the book because he believed that such negative feedback would be more likely to help him improve his skills, stating that such analysis would be far more helpful than reviews praising his work.

For that reason alone his work deserved another shot.

I opened up TROG again, first to figure out what my disconnects were.  I rediscovered them fairly quickly and, in retrospect, they seem very minor and not something that would bother anyone who hasn’t been reading science fiction for over half a century (nor something that would bother most who have been reading science fiction for a half century or more), dutifully shared my notes and then dove in.

To discover a richly detailed futurescape full of action, political intrigue that would make Machiavelli applaud, a unique take on artificial intelligence, a new approach to robotics, a world obviously based on a tremendously detailed amount of world-building, an interesting hero, well-motivated and yet largely inscrutable supporting cast and a new SF talent that will no doubt produce additional works of wonder that in future I will not hesitate to read – even if the opening paragraphs give me pause.

I think the two authors Todd McAulty reminds me of most are Larry Niven and Alexis Gilliland:  Niven for his ability to keep the reader guessing, of presenting multiple interpretations of possible plots and keeping them in the air all at the same time;  Gilliland for getting deep into the weeds of political machinations and illustrating how political expediency can lead to a ride down the rabbit hole.

The Robots of Gotham takes place in a near future in which machine intelligence has awakened and has a profound impact on human society, not the least of which is a balkanized United States, a former US that is still reeling from a war that it lost against a coalition of South American instrumentalities, perhaps working in conjunction with several machine governed entities.   McAulty’s main character is the CEO of an electronics communication firm who, hunting after business, finds himself in an occupied Chicago when a remnant of the United States military in the form of a giant mech, puts in an appearance in the form of an attack.  It seems that the US (when it was still an intact nation) had legislatively banned all autonomous machine intelligences as well as all research into the same and, as a result, countered machine-based military hardware with human-piloted giant mechs.

Our hero gets dragged into a seemingly endless series of convoluted secret plots by assisting an injured robot who turns out to be a diplomatic envoy for the independent state of Manhattan.

The constant refrain running through my head as I was swept along by the narrative was “omg – another convolution!  How deep does this thing go!?”

The voice inside my head made such exclamations with a positive, wonderous tone. It wasn’t saying “OMG, this is just too twisty-turny, deeply layered and obscure”  it was saying “OMG!  this is just like real life where no act of kindness ever goes unpunished!  See!  THIS is what happens when Canadians go all Good Samaratin and start helping injured diplomatic robots from the Kingdom of Manhattan and try to assist Russian-accented doctors who are almost single-handedly trying to save humanity from multiple existential threats with one hand tied behind his back!”

And then there’s the dog.

No, I won’t offer details as that would be too spoilery.  But yes, there’s a dog, not to mention two love interests (other than the dog).

Lets just say that if you enjoy a book that manages to surprise you with the turning of nearly every individual page, TROG is your baby.

There’s a lot to be said about The Robots of Gotham if one is looking at it through the lens of “SF is commentary on our current times”;  it’s quite possible that the various machine intelligences that have taken over the governance of various nations around the globe are stand-ins for the various rearings of fascist heads around the real globe;  it’s quite possible that the remnants of the US are analogs for the oligarchs of that country and that the entire novel is commentary on a coming conflict between the uber rich and dictatorship; or that’s its commentary on what can happen if those various forces are allowed to continue down their paths without check.

But I find that attempting to tease out the “hidden meanings” of this novel is an exercise that robs it of some of its joy;  I think it best to swallow whichever pill strikes your fancy and then hang on for the ride, because no matter what your take aways may be at the end, the ride itself is a howlingly mad and exciting one.

I’d be remiss if I didn’t mention, at least in passing, that I found McAulty’s take on the emergence of AI and autonomous, self-aware machine intelligences, to be a unique one.  It strikes a fine balance between the AI as humble assistant to its creator (Asimov) and the AI as machine hell-bent on the elimination of humankind at all costs (Terminator).  It treats AIs as “people” – some smarter than others, more capable than others and subject to whim and whimsy just like people, and some just as influenced by “emotional” issues as people.  It’s kind of odd to think of a self-aware machine capable of wiping out humanity deciding not to do so just because it doesn’t feel like it, but I think that may present a viewpoint on AI-Human relationships that rings true, and may be unique in the annals of SF.  We’ve encountered homicidal robots before (Fondly Fahrenheit for example), but never, to my experience, ones that adopt human instrumentalities, mores and ethics simply because that’s the world they’re born into.

This take certainly provides the author with some very fertile ground worth exploring, and it is explored very well here.

If you want to skip the yada yada, feel free to do so.  Just know that if you are into conflict of all kinds, ranging from the personal of a knock-down fist-fest, to the global of weapons of mass destruction;  if you find artificial intelligences intriguing, if you like giant warrior mechs and power-armored fighting suits, not to mention twisty-turny political intrigue worthy of (ok, I’ll say it – Game of Thrones), then you should run, not walk, to your nearest bookstore or web browser and pick up The Robots of Gotham.

If I were to tell you that these dozen titles were for individual science fiction magazines, many of which were published in the same years, were all owned by the same publisher, you’d probably be astonished to discover that the publisher was not a dominating force in the industry during their heyday. Despite appearances to […]

This Week in Streaming from JustWatch