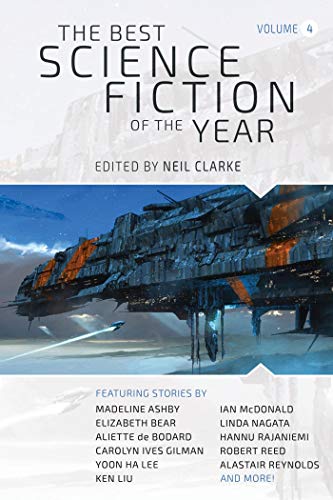 After Gardner Dozois’ passing last year left a void in science fiction anthology editing, Neil Clarke is probably the closest we have to a seasoned curator who can fill Dozois’ shoes. Clarke’s fourth annual installment of The Best Science Fiction of the Year (published July 2, 2019 by Night Shade Books) doesn’t disappoint, and he does a nice job with a Dozois-style introduction, summarizing the prior year’s state of the science fiction short story industry. Here, we review a few of our favorites from the 29 short stories Clarke selected from publications of the year prior.

Elizabeth Bear once again proves her unmatched ability to spin an engrossing, high-concept story brimming with irony in a compact format with Okay, Glory. When an aging tech mogul from the near future (think Zuckerberg at 60) finds himself imprisoned in his own home (run by a sophisticated AI) and held for ransom by anonymous kidnappers demanding an astronomical sum, he must dust off his programming skills to escape. The house he’s built is fortified with bulletproof glass and so fully automated the AI even has the ability to lock the fridge. The house AI has been cleverly hacked and believes she must keep her owner locked safely in the house because the outside world has been completely overrun by a zombie apocalypse. The programmer escapes in an equally clever way which involves teaching the AI to be self-aware. Along the way, he learns that the prison is largely a consequence of his own mistreatment and estrangement from everyone who might care for him, and the story stands as a broader metaphor for the ironic, isolating effect of increasingly smart homes and technology.

Different Seas is another brilliant short story by genre master Alastair Reynolds, who has cornered the market on energetic portrayals of capable characters working through hard science fiction problems to avoid dying. In this one, failure means crashing a fully automated and currently malfunctioning clipper ship into a giant barge in the middle of the ocean beyond help from any “warm bodies.” The character survives through a combination of assistance from a type of contracted help center capable of being “meshed” into an onboard proxy, and vintage Reynolds swashbuckling. A couple of surprising yet plausible twists complete this essentially perfect short.

Our favorite story in the anthology is Lions and Gazelles by Hannu Rajaniemi, an accomplished science fiction author, PhD and co-founder and CEO of a biotech startup. Gazelles is a uniquely entertaining and sophisticated story depicting a realistic future where tech entrepreneurs must prove the viability of their biotech inventions in an ultra-race event featuring heavily upgraded runners as contestants. First prize? You’re funded! The story is told on a compelling personal level revolving around a realistic portrayal of a soured rivalry between co-founders and the challenges of mixing business and friendship. When people malign science fiction for being too escapist, we’re happy to have a story like this to demonstrate how effective genre storytelling can be grounded, nuanced, and surprisingly entertaining. More of this please.

Filming continues in Georgia and we’ve got “exclusive” pics from Google Earth; plus a note about the daily schedule