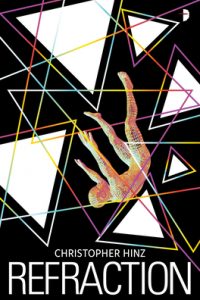 If I were to use the term “potboiler” for Christopher Hinz’s novel, Refraction (Angry Robot, published on 10 November 2020), that is not to do it a disservice. Quite the opposite, in fact. For a work which contains some known science fictional tropes and new ideas, bound up in the format of a high-octane thriller, I have to say I enjoyed every moment of it.

Opening with an unpromising group of characters – trainspotters, no less (sorry, I meant no offence, I meant of course “rail enthusiasts”) – who get into a spot of bother observing a vintage train and carriages transporting teams to and the Tau Nine-One research facility whose purpose is at this point unknown, we move swiftly into thriller territory with armed men on the offensive.

We next jump straight into the main storyline and the lead protagonist, Aiden Manchester, who lives on the edge of society with his sister and niece. Disenfranchised, impoverished and unmotivated, Aiden’s life changes dramatically when he discovers a letter, secured in a safe which only he (unknown to him) can open. A letter from his late father revealing something of his true identity. Aiden, along with a group of other individuals, nicknamed the “quiver kids” was the subject of experiments at the Tau Nine-One facility, having been affected in some way by an ancient artefact in the shape of an orb, suspected of being alien in origin. Beyond increasing their IQs the orb developed in each of the children disparate “powers”, some involving the involuntary manifestation which Aiden calls “chunkies”. These are jellylike substances which either do nothing, become weapons or portals to somewhere not of this earth.

In one scene, a former quiver kid, Jessica, manifests a chunky, aimed at an attacker. What happens next is far too close to the facehugger scene in the first “Alien” film, tentacles included, for my personal taste. Jessica is also the subject of an ill-judged, rather voyeuristic ploy to distract the enemy, which basically involves her getting naked. This tactic came across as more of a teenage sexual fantasy than a plausible plot device, sadly. However, those carps aside, I was still able to enjoy the book enormously.

In the final section,  we learn the reasons for six children having separate powers, when Aiden is transported into a terrifying otherworld. His journey through the portal (yes, we have seen portal devices before, too), is original and genuinely disturbing.

In conclusion, while I had some reservations about Refraction, I felt it was beautifully paced, crisply written and contained flashes of originality, even brilliance. It’s just begging to be made into a movie – and I would definitely go see it.

Howdy friends and neighbors. How’s it going? Been kinda wrapped up with writing projects to post much here. But also since this is a blog that comments on subjects far and wide, it’s been hard to find something to comment on that wasn’t depressing. The news has been filled with stories of bombings, mass shootings, […]