Alternate history can be a tricky endeavor. While character development is typically preconceived through hearsay and legend and often validated by recoded events, this does not always paint an accurate portrait of those involved. After all, recorded history can be limited by the perception of those documenting the events and what elements are included and what is left out. More often than not, all we are left with in the study of history is a log of physical results and an occasional diary left by a witness or those involved.

Yes, there is a lot more to altering history than merely changing past results. To convince the reader to ponder “what-if” when presenting any plausible script change, it is also important to stay true to the recognized imagery of those involved. 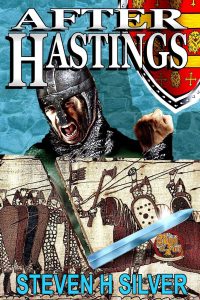 Originally published by Ring of Fire Press in July 2020 and distributed by Baen Books, the alternate history After Hastings by Steven H. Silver takes readers in an astonishing new direction following the famed Battle of Hastings. According to legend, because that is what we have to go by, the bloody seaside battle took place on October 14, 1066. By the end of the day, the forces of Anglo-Saxon King Harold II were defeated, and their king fatally shot in the eye with an arrow. Following the decisive victory, William (becoming the Conqueror) and his Norman-French army marched on to London, ending the Anglo-Saxon reign of England, which until then, had existed since the 5th century.

Aptly titled After Hastings, Silver’s story takes place months following the famed battle, but after having drastically different results. In this adaptation, King Harold II emerges victorious, leaving William a broken Duke of Normandy in the shadows of defeat, and a fragile kingdom in chaos as the throne is contested by the church. Just as in other recorded events where history is focused less on the actual confrontation and more on the outcome, Silver takes readers on an alternate journey where the cast of characters might have flipped, but many of the ensuing conflicts remain the same.

After Hastings is a direct reflection of humanity and how the ever-evolving politics of church and state are and will always be an influential element in society. But where the story truly excels is in the author’s distinctive use of noted historical figures and reimagining them in this drastic turn of events that surprisingly yields an eerie familiarity. With a comfortable narrative that allows the reader to settle into the period, this character driven story becomes an eye-opening speculation on what could have been.

Perhaps catering a tad more to the historian than the conventional science fiction fan, the novel After Hastings by Steven H. Silver certainly addresses the “what-if” question and is well worth the time for any fan of the genre.

A look at Slipstream and why it belongs in the bargain bin.