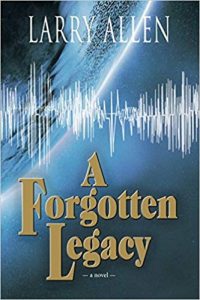 Some science fiction writers get bogged down by the technological aspect of a story and neglect the importance of character involvement while others do the reverse. But an ideal narrative blends the two facets together, comfortably, so that they do not feel forced. The Forgotten Legacy by Larry Allen is one of those books that successfully hits the literary sweet spot by combining these elements.

Exploratory interstellar vessel Endeavor on an expedition nearly fifty million miles from home discovers a planet inhabited with life. A short time after First Officer Adam Webster lands on the planets surface to make first contact, communications is lost. But before any action could be taken, the Endeavor suffers a catastrophic event that nearly destroys the ship. A long way from home, the survivors soon make life altering decisions that change the course of their future, as well as those who follow.

The Forgotten Legacy begins as a first account narrative from Endeavor Mission Specialist David Frey, recorded in log transmission with the hope that somebody will discover them and know what happened. But as the chapters unwind, readers soon find themselves bouncing confusingly between time and space as the web of core characters are slowly tied together. Though their binding links may seem cryptic and it takes a while for the early chapters to pick up speed, stick with it because once it picks up and the mystery is exposed (yes, there’s a bit of mystery here, too), the adventure never slows down.

Where author Allen truly shines is in the ability to take a group of ordinary people with uniquely simplistic skills and put them in extraordinary situations. What does an insurance customer service associate with a dull unremarkable life like Greg Parker have to do with aliens? And though his coworker Linda Garner’s ability to pilot small aircraft does play a significant role, their awkward friendship brings genuine tension to these flawed characters.

Ham radio enthusiasts will be happy to stumble across the character Bob Parsons, Parker’s tech savvy friend. Though some of the technology is realistic, the author does take some creative licenses and pushes the envelope of plausibility a bit when intertwining it within the story. But as a licensed amateur radio operator, it would be nice to see more of this type of character involvement in stories where communication is key.

Though the book concludes with all of the puzzle pieces falling into place, creating a satisfying picture of discovery, readers are still left with some major unresolved elements that beg for future volumes if the author so chooses. More with the ham radio guy would be nice too, hint-hint.

A story woven by colorful characters on a collision course where past and future collide, A Forgotten Legacy by Larry Allen gives readers a unique perspective of space travel and the desire to find new life beyond the stars.