Rememberances of Stan Lee continue to pour in. Each and every one is personal – the man touched so many lives in so many different ways.

The shadows between the buildings hide monsters, but the unassuming populace goes about their business, oblivious to the fight between good and evil that rages around them. The gods are real, and they come from outer space, wielding magic and science so advanced they blend into one another. Even the mightiest hero has to pay his bills.

Where would fantasy, and indeed much of genre fiction be without these tropes?

Over the past few days, the internet has been filled with wonderful tributes to Stan Lee, born Stanley Martin Leiber, born Dec. 28, 1922, and died November 12, 2018. He was one of the main creators of modern superhero comics, and comics, pop-culture, science fiction, and fantasy, would look very different without his influence.

From the very beginning, his superhero comics had a gonzo sensibility that might incorporate a ghost in one episode, aliens in the next, and good, old-fashioned street crime in another. Worlds and genres collided frequently, and one universe wasn’t big enough for his creations. He also expanded the audience for superhero comics from kids to teens and adults, similarly to how fantasy fiction would also expand its audience in the later half of the 20th century. 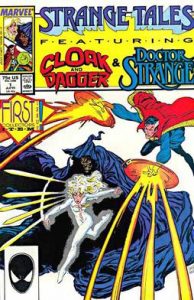 My first exposure to Stan Lee’s work was reading my dad’s collection of Dr. Strange comics when I was a kid—really jumping in at the deep end. While Dr. Strange’s background and origin reify some racist stereotypes, his stories quickly run far beyond those questionable beginnings, throwing Dr. Strange into conflicts with both gods and beings from other dimensions.

It can be hard to trace threads of influence, but it seems likely to me that Dr. Strange and his cases, his house on Bleecker Street, the way he walks in and out of the mundane and magical worlds, gave many urban fantasy writers working today the tropes and setting they have expanded upon. The City of Weirdos trope defined at TVTropes was a favorite of his, particularly his vision of Lower Manhattan:

City of Weirdos is a….trope when people in a city idly dismiss unusual happenings and odd-looking strangers as part of metropolitan life. [It] is almost always invoked in large urban centers, where the everyday bustle and diverse population justifies such reactions 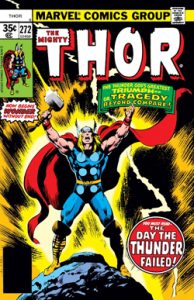 Thor, too, as a superhero as well as a Norse God, has had a huge influence on the fantasy and science fiction that followed it. I wonder if the Stargate franchise would have hit on the idea of gods-as-aliens without Thor and Superman coming before it.

Though Stan Lee incorporated his own influences and homages into his works, the influence of Stan Lee’s comics, and the creators that followed in his footsteps, is everywhere in modern culture. He was a generous creator in every sense of the word, and his are the kinds of gifts that will long outlive him.

What are your favorite creations from Stan Lee?

Of note is the upcoming Corflu, the annual convention for fanzine fans, which next year will be held in Richmond, Virginia, May 2nd to 4th 2014.