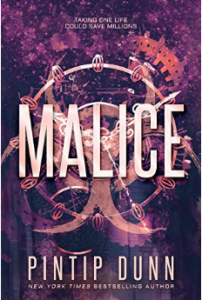 I like a twisty, angsty time travel story as much as the next science fiction fan and after I read New York Times Best Selling Author Pintip Dunn’s Malice, I was really eager to interview her about the book. The novel is officially a Teen & Young Adult title but as someone who technically aged out of those categories years ago, let me assure you readers of any age YA and beyond will enjoy this story. There’s definitely a romance woven into the plot as well.

The blurb, courtesy of Macmillan: What I know: a boy in my class will one day wipe out two-thirds of the population with a virus.

In a race against the clock, I not only have to figure out his identity, but I’ll have to outwit a voice from the future telling me to kill him. Because I’m starting to realize no one is telling the truth. But how can I play chess with someone who already knows the outcome of my every move? Someone so filled with malice they’ve lost all hope in humanity? Well, I’ll just have to find a way—because now they’ve drawn a target on the only boy I’ve ever loved…

Veronica Scott for Amazing Stories Magazine: What were your three major influences or inspirations when writing Malice?

PD:  1. My editor. I was having drinks with my amazing editor, and she mentioned this inkling of an idea that she thought was directly in my wheel-house — it had time travel and end-of-the-world stakes and big moral questions. I was instantly intrigued! We continued talking and brainstorming (and drinking), and by the end of the night, I had a new book deal!

Of course, it took many months and drafts to turn that quick high concept into a fully fleshed-out story! But that is where the idea was born — in a bar in Atlanta during the RT BookLovers Convention in 2017. 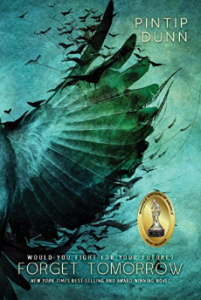 When I was a little girl, doing my very best to read every book in the children’s section of my public library, I never imagined that one day, I would be able to publish a novel that featured a Thai hero.

ASM.: Which character was the biggest challenge to write and why?

PD: Definitely Alice. While I’ve written futuristic stories before and contemporary stories before, this is my first contemporary setting with a time travel twist. Thus, the story needed a different type of heroine than the ones I’ve previously written, and it took a few tries to find one that worked for the story.

In the end, I’m absolutely thrilled with Alice’s character, and I hope you’ll love her as much as I do!

ASM.: I felt so much for Alice during the novel – she had difficult choices to make for sure. The plot is very twisty inagoodway (no spoilers from me), how did you track all the variations on events due to time traveler interventions, to keep the plot straight when you were writing the book? Did you plot the book out in advance or are you more of a pantster?

PD: I always describe myself as a pantser who wants to be a plotter. That is, I recognize and highly value how efficient and time-saving an advance plan can be. However, my natural instincts as a writer are to figure it out as I go along.

Malice is probably the most complicated book I’ve ever written. For that reason, I did have a full outline before I began writing…but I’m not sure how much it helped. I ended up re-writing this story many more times that I care to admit, so that I could get those plot lines straight!

Without giving away too much, I wrote out the events on different timelines, and then, I started intertwining them.

ASM.: This book took me right back to high school on the first few pages. (Time travel!) Were you inspired at all by your own high school experiences? If you time travelled, is there something in high school days you’d go back and redo?

PD: In the very opening of the book, Alice’s brother — Archie — writes on his knee with a blue ink pen, and the marks just keep spreading… and spreading. When I was in high school, I witnessed my brother doing this very thing! It was one of the creepiest images I’ve ever seen — although I couldn’t tell you why. That moment has clearly stuck with me.

Other than that isolated moment, however, my high school experience was very different than the one I depict here. If I could time travel back to the past, I would eliminate some of the toxic high school relationships that wrecked my self-esteem.

ASM.: Food is very important in the book, especially since Alice loves to photograph food…do you have a favorite recipe or dish you’d like to share with our readers? Or your favorite from the book?

PD: Sure! I would love to share the recipe for khao tom sea bass, which is basically boiled rice and sea bass. Bandit cooks this for Alice during the book, and it is one of our family’s favorite dishes. We call it the Breakfast of Champions!

The funny thing about Thai cooking — or maybe this is just my family — is that we don’t cook with recipes. I think it’s because in so much of Thai cuisine, dishes are flavored “to taste.” You put in a little of this, a little that until it tastes good. So, when I was first started learning how to cook, I sat down with my cousin so she could give me “recipes” of my favorite dishes. What that meant was that I ended up with a notebook full of lists of ingredients that went into each dish!

ASM.: Do you have a favorite time travel movie or TV show?

PD: I adore Predestination. That movie made my head hurt for hours afterwards — which is a compliment of the highest order! I wanted to keep thinking about the time travel conundrums…and think about them some more… and some more.

I’m also a big fan of The Time Traveler’s Wife, although I fell in love with the book before the movie. I think this book uses time travel in the same way I do: while time travel is an integral plot device, the story is actually focused on the characters and the emotions.

ASM.: When did you first become a science fiction fan and why? What was the first SF book you read?

PD: Gosh, I’ve been fascinated by fantasy worlds and other dimensions ever since I was a little girl. The book from my childhood that I first remember reading (and loving) was The Girl With The Silver Eyes. The first SF book I remember reading (and obsessing over) as an adult was Ender’s Game. I enjoy reading the SF genre because it’s FUN. The reason I write SF, however, is because I love making my characters answer impossible moral questions, such as the one that Alice is confronted with in Malice: “Would you kill one person in order to save a million?” These kinds of questions are much easier to come by in a fantastical or futuristic setting!

PD: I have a really fun #ownvoices YA rom com coming out in September, 2020! It’s called Dating Makes Perfect, and it features a Thai heroine and hero. The cover (which I hope we can reveal soon) is – dare I say it? – absolutely perfect.

Here’s a bit about the book:

But simply because they’re not allowed.

Sixteen-year-old Panida just wants to find herself since her older sisters have deserted her for higher education. Midnight karaoke parties are not the same when there’s only one of you. Too bad her parents have other plans.

In a move that other Asian American girls know all too well, six months after the older Tech twins got to college, her parents asked, “Why aren’t you engaged yet?”

Her sisters retaliated by vowing that they won’t marry for ten (maybe even twenty!) years, not until they’ve had LOTS of dating practice.

So now, her parents have declared war on the status quo. Not only must their youngest daughter, Panida, date in high school in order to practice her relationship skills, but she must do so under their watchful eyes.

The Techs will decide when, where, and how each date occurs. And with whom. Especially with whom.

Their first candidate? The son of their long-time friends, Mat Songsomboon— arrogant, dreamy, and infuriating.

Panida’s known him since they were toddlers throwing sticky rice balls at each other —and he would be the perfect person for her to practice dating.

If only he weren’t her sworn enemy.

The Magnolia Sword, by Sherry Thomas

For more about Pintip Dunn and her books, visit http://www.pintipdunn.com/

Journey to Where by Steven Paul Leiva is a fresh adventure that reads like a number of familiar SF classics, but with a hint of modern elements taken from today’s headlines.

How Will Humans React If We Discover Alien Life? This New Study Just Found Out (and Surprised Us)