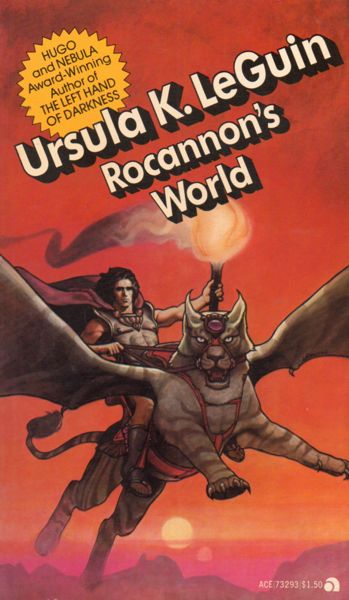 In 1985, Orson Scott Card published Ender’s Game, a book that relied heavily on the use of a faster-than-light communication system called the Ansible. Card needed the Ansible (or something like it) because through this faster-than-light communications system, his brainy, gifted children were able to destroy the evil Buggers in real time, even though they thought they were only playing video games. You all know this.

What you don’t know is that the Ansible (the name and the concept) was not invented by Card, but was stolen, without attribution, from Ursula K. Le Guin. Nowhere in Ender’s Game does Card give her credit for the Ansible–at least in the original edition of Ender’s Game which I have. You might not think this is a big deal, but it is.

Le Guin first mentions the Ansible in her novel Rocannon’s World, published in 1966, and the invention of the device itself was a central motif to her 1974 novel, The Dispossessed. The main character of that novel was the inventor. Card, either through laziness or lack of imagination, appropriated Le Guin’s device full-bore and for reasons that have escaped me over the last thirty odd years, is that no one’s complained or cried foul. Indeed, other writers since then have also used the Ansible for their FTL communication needs.

If Card had stolen a tune from a song and incorporated it in a song of his own (and consequently made a boat-load of money) without sharing the credit with the original songwriter, he’d have his ass handed to him in a sling in court. This is what happened to M.C. Hammer when he stole a famous riff from Rick James in 1990 for his song, “U Can’t Touch This”. The riff that made the song a world-wide hit (and made Hammer’s career) came from the creative mind of Rick James and it was only after a lengthy court battle did James end up sharing credit for Mr. Hammer’s song. Did Hammer say in court that it was a homage to Rick James? No. Did he say that everyone steals from everyone else in the music business and that it’s no big deal? No.

And did Rick James shrug and think it was a compliment given to him by a younger artist and let it go? No. He sued and won a lot of money–and had his career rehabilitated because of that theft. (And it made M.C. Hammer a multimillionaire.)

That’s what it was. Theft. You don’t take other people’s ideas and make them your own. Here’s something else most of you don’t know: When Ian Fleming’s James Bond novels and movies hit big in the mid-Sixties, Fleming collaborated on a screenplay with two other men that later became the movie Thunderball. The early novel versions of the book had Fleming as the sole author (I have one such copy), but he was later sued by his co-authors and the novel is now co-credited to Kevin McCloy and Jack Whittingham. It’s the only James Bond novel that has multiple authors. Like Rick James in the music industry, McCloy and Whittingham in the movie industry did not sit back and think that it was okay for Fleming to write a novelization of their joint collaboration. Nor did they think it was a friendly homage to their friendship and their days of boating and snorkeling in the Caribbean. Fleming’s novelization was, in part, based on their ideas. They didn’t let it pass. They demanded credit for it in court and they won.

Now,I know what you’re thinking: What’s the big deal? It’s just a science fiction book. No biggie. So what if Card used the Ansible without permission? Back in the early Eighties (which you might not know or might have forgotten) Orson Scott Card was the rising star in the field. He was friends with everybody. Treasurer of the SFWA. Publishing in OMNI just about every other issue. Making scads of money. (At one point in the Nineties he was referred to as “beloved” by several Young Adult book critics who much admired Ender’s Game. Even news releases about the upcoming Ender’s Game movie refer to the book as “beloved”.) So what’s the deal? It’s even sort of cool, isn’t it, to put into your novel an idea created by another science fiction author. We know what’s going on. We’re all friends here. What’s the fuss?

The fact is that if you tried it today, you’d be stopped cold by either your agent or your publisher. Your book would never make it to print. Here are some “for examples” in case you think this is a trivial point. Think about it. The fact is that you could not publish a book if it had giant sandworms that were specifically called the Shai-hulud. The name comes, as you know, from Frank Herbert’s Dune series. That name, those creatures, all belong to Frank Herbert’s estate. They are products of Herbert’s mind and imagination. They are also the the product of his physical labor at the typewriter. No publisher would let you go anywhere near giant sandworms called Shai-Hulud or mention stilll-suits or ornithopters. You would never, ever find an editor (at Tor, at Baen, at Pyr, at Ace–anywhere) who would allow you to publish such a book. You say that these things are part of a shared-world literary environment in science fiction.  And I’ll say: All shared-world books are sanctioned by the person from whom the main vision of the stories derive. There are shared-world stories galore. Larry Niven’s Man-Kzin Wars are sanctioned by Larry Niven, even if they are written by other people. And nobody can write a Star Trek or Star Wars novel without official sanction from the Gene Roddenberry estate or from Disney, who now owns the Lucas material. Try Conan the Barbarian or Tarzan of the Apes. No go. How about writing your own Doc Savage novel? Conde Nast still owns the rights to Doc Savage and they aggressively troll the internet to make sure that those of us who are Doc Savage fans are not writing Doc Savage novels (which many of us are itching to do). Only Anthony Tollin is allowed to reprint the Doc Savage novels and Shane Black has the rights to write a screenplay. That’s it. Doc Savage is locked up.

But you say, the Ansible is such a little thing. Well, in Ender’s Game it’s the device that allows the children to defeat the Buggers in real time light years away. It’s not a trivial matter. It’s absolutely crucial to the novel.

Obviously Orson Scott Card needed a faster-than-light device for his novel. But did he employ Le Guin’s Ansible because it was the only form of FTL radio transmission allowed in science fiction? If you’ve been reading science fiction for the last 50 years, as I have, you’d know that most science fiction writers invent their own FTL communications systems. James Blish has the Dirac Communicator and A. Bertram Chandler’s John Grimes’ series has the Carlotti Device. Stephen R. Donaldson, in his Gap cycle, uses something called the Symbiotic Crystalline Resonance Transmission. There have been sub-space communicators (E. E. “Doc” Smith) and hyper-space communicators (Asimov and a hundred others). Card could just as easily made up his own name for his FTL communications system and we’d all get it. He didn’t even need the Ansible. He could have called it the Klinghoffer. He could have called it a wonky. But he didn’t. He stole the concept from another writer and used it specifically by name. He stole it. There is no other word for it.

Let me get legal on you in case you aren’t convinced. When I got my doctorate at the University of Utah, my dissertation committee had to go over everything I wrote, including my dissertation, to make sure that none of it was stolen; that it and the content of my written exams were my own intellectual property. In other words, they “vetted” me. Every university does this to its doctoral candidates and have done this for hundreds of years. That’s how universities maintain their accreditation. That’s what gives their degrees intellectual heft. Intellectual property theft and plagiarism are not accepted on any level in the university system in America. Or the world, for that matter.

What about publishing? Well, my publishers did the same thing. Every novel I have ever sold has been gone over for words or phrases or concepts that might have caused them legal harm. My books were vetted. When properties are purchased for movies, they also have to be vetted. They are gone over by lawyers to see if there are any liabilities by way of possible copyright infringements. We know that James Cameron, after years of fighting Harlan Ellison, had to acknowledge Harlan for his contribution to The Terminator because the idea was basically Harlan’s. (I remember seeing the episode of The Outer Limits–or it may have been an episode of The Twilight Zone–where two warriors come from the future to fight it out in the present. I remember that Michael Ansara was one of the warriors. Harlan was rightfully angry because The Terminator really does spring creatively from his original idea. He fought back in court and won. Which was the right thing to do.

But Orson Scott Card gets a pass. He is “beloved”. (Pretend for a moment that the current whoop-de-doo about the Ender’s Game movie isn’t happening. That’s not part of this discussion.)

Perhaps you think that this is just a tempest in a teapot, that no harm, really, has been done. Is that true? Why am I held to a higher standard than Card? (And I’m just small fry compared to him.) Card did it (I think) probably because it had never been done before. Or perhaps it was because his publishers thought it really was a kind of homage to Ursula K. Le Guin and that she would be cool with it. But nowhere in Ender’s Game is there a note from her saying any such thing.

Perhaps Card has explained all of this in one of his many “author’s authoritative editions” of Ender’s Game. Ever so, explaining why you did something after-the-fact doesn’t change the reality that you stole the idea in the first place. Card should be held accountable for this, but I know he won’t. That book has made him a multimillionaire and the movie will only give him more millions to roll around in. Which is too bad. It sends out a very discouraging message. Card got away with something no one else could.

I guess there are perks to being “beloved”.

“Hey!” and Ed White broadcast, “I’ve got a fire in the cockpit!” The Apollo outer hull ruptured and all three astronauts were dead.

Beauty is in the eye of the beholder. That is to say that beauty is subjective and, despite the human condition that every one of us shares, is subject to cultural biases as well as personal ones. This point was underlined recently with an online social experiment conducted by journalist Esther Honig, Her project, Before […]