On a July day nearly 50 years ago, a man from the small town of Wapakoneta, OH, walked on the Moon. There’s now a museum there, commemorating the event.

The village of Wapakoneta, Ohio is the county seat of Auglaize County, adjacent to I-75, but not near much else. Founded near the site of French Fort Au Glaize in the 18th century, this rural community had a population of 5,378 people according to the 1930 census. A few months after the census was taken, Viola and Stephen Armstrong gave birth to a son, Neil, on August 5, at the family farm. Neil, of course, would become the first human being to set foot on another world when he stepped out of the Eagle onto the Sea of Tranquility on July 20, 1969.

In March, 2019, as we approach the 50th anniversary of Armstrong’s landing on the moon, I was planning a road trip that included a leg from Pittsburgh to Chicago. Realizing that a reasonable route, although by no means the most direct or logical route, could take me through Wapakoneta, I made arrangements to spend the night in Neil Armstrong’s home town and visit the Armstrong Air and Space Museum, which has been in Wapakoneta since July 20, 1972.

When you approach the building, the first thing you notice is the design. The two wings rise out from the center, like a pilot’s flight wings. Above them is a large white dome, representing the moon Armstrong explored. When we were there, a replica of a Gemini capsule sat on the lawn, designed for kids to climb into and play on. There was also a small memorial stone in honor of the astronauts killed in the Apollo 1, Challenger, and Columbia disaster. 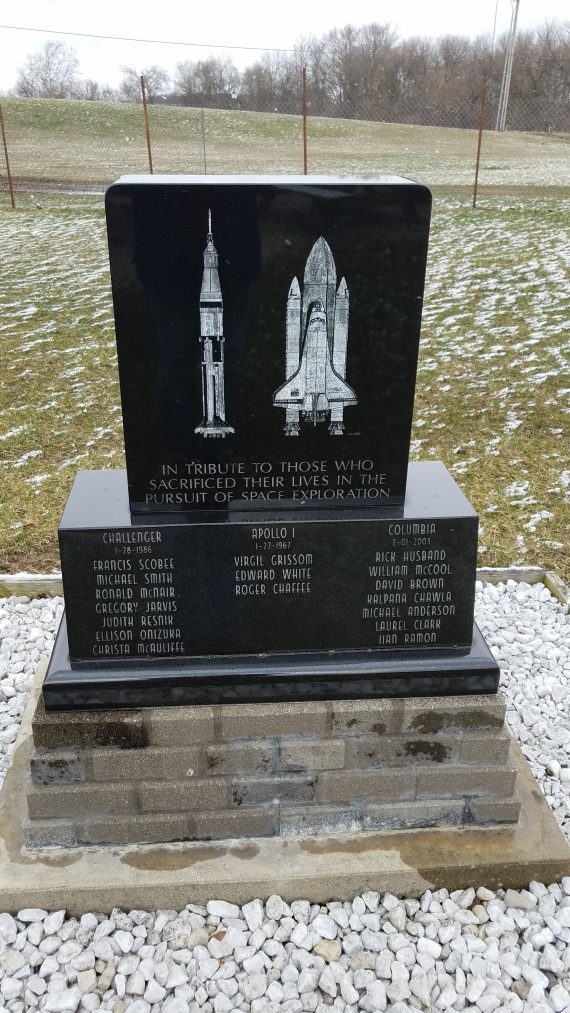 The entry to the building is lined with a timeline of space exploration on one wall and a collection of photos of Ohio-born astronauts on the opposite wall. If you look at the 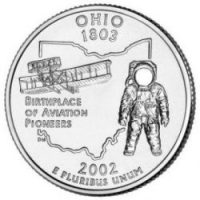 reverse side of an Ohio state quarter, you’ll see an image of Neil Armstrong, but he’s only one of more than twenty astronauts born in the Buckeye state, including Judith Resnik, John Glenn, James Lovell, Charlie Bassett, Donn Eisele, and more. Ohio astronauts have flown on Mercury, Gemini, Apollo, space shuttle, and Soyuz missions.

The museum is quite inexpensive, only $8 for adults. It is divided into four parts. The first part focuses on Armstrong’s life and role in the space program, the second part is a film, the third part looks at the post-Apollo space program, and the final part of the museum is, naturally enough, the gift shop.

Greeting the attendee as soon as they pay their admission is a five foot tall blow up of the cover of the November, 1928 issue of Amazing Stories, chosen, I expect, for the Frank R. Paul cover for Frank J. Brueckel’s novelette “The Moon Men,” which is set on Ganymede rather than our moon. There is no explanation for the presence of the cover or why this particularly cover was selected.

The museum then includes documentation from Armstrong’s life in Wapakoneta: yearbooks, newspaper articles, the Aeronca Champion airplane, in which he learned to fly when he was 15, suspended along one of the walls, as well as paraphernalia from the space program. A full-size model of Sputnik hangs from the ceiling, Armstrong’s backup lunar suit, flight suits, the Gemini 8 capsule which carried Armstrong and David Scott on a shortened mission to dock with an Agena target mission on March 16, 1966. 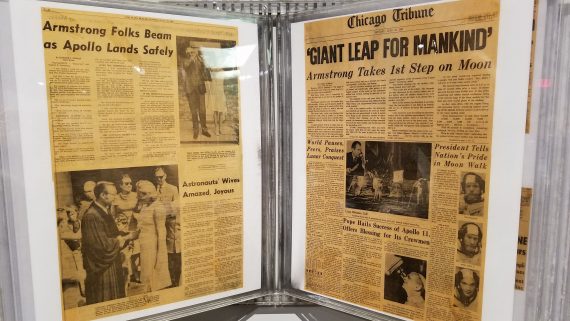 There are newspapers from around the world on display, celebrating Armstrong and Aldrin’s accomplishments, with the Cleveland Plain Dealer focusing on an article about Armstrong’s parents. There is a case full of various medals presented to Armstrong as well as a piece of the moon Armstrong brought back with him. 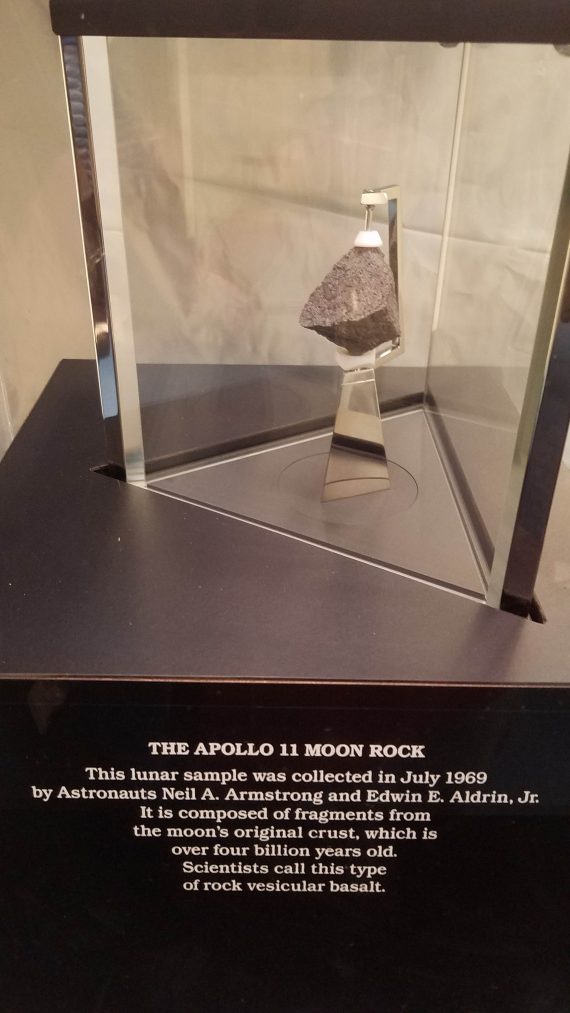 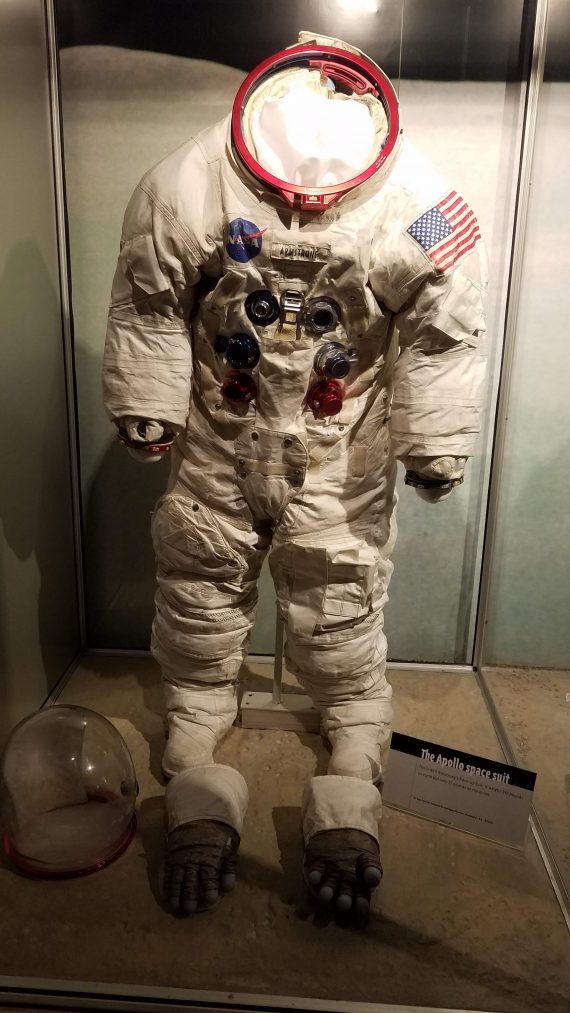 This first part of the museum is the most interesting as it has a view of Armstrong that no other museum can have: a local, known be the community as an individual, not just as a celebrity. It is presented well, guiding the visitor past all of the displays with a narrative that tells the story not only of Neil Armstrong the man, but of the space race and his role in achieving John F. Kennedy’s goal “of landing a man on the moon and returning him safely to the Earth.”

The museum is designed so everyone passes through the auditorium where a 25 minute documentary film discusses the flight of Apollo 11 and provides additional context for the displays which the visitor has just viewed. The film gives a better feel for the mission and who Neil Armstrong was than the recent film First Man, starring Ryan Gosling. When it was finished, I heard a young voice behind me exclaim, “So that’s why going to the moon was important.” 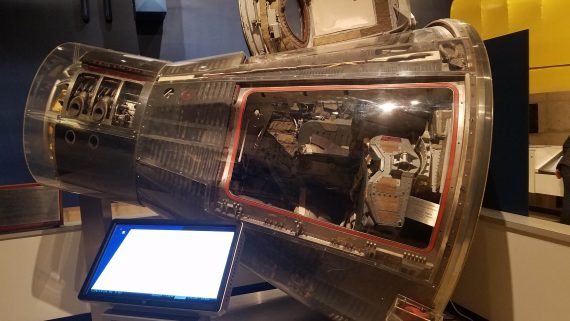 Beyond the theatre, there’s a poorly designed bottleneck into the second half of the exhibits. While people arrive on their own schedule and move through the first half of the museum in a leisurely way, the second half has an entire theatre’s worth of people enter it simultaneously through a narrow walk-way. This means these exhibits, which are more general in nature, also feel more crowded and, in some ways, less important. There’s a copy of Robert Heinlein’s Stranger in a Strange Land on display. Although The Man Who Sold the Moon would seem like a more apropos choice, this copy was read by Janet Voss aboard Discovery during STS-63 in February 1995.
The shuttle program is the main focus of this second room, which includes a tire from Endeavour mission STS-68 in September 1994 and examples of foods eaten by astronauts on the space shuttles, including specially designed cans of Coke and Pepsi which work in zero-G.

The entire museum takes about 90 minutes to go through, one third of which is in the theatre for the movie and probably 40 minutes in the first half and 20 minutes in the second half. The only remaining part of the museum is the necessary gift shop, which includes clothing, books, videos, and various other trinkets to commemorate your visit and remember that a man from tiny little Wapakoneta, Ohio walked on the moon fifty years ago.

On the way from Toledo to Dayton (or Cincinnati) and not much else, if you happen to be traveling through northeastern Ohio and aren’t in a rush to get to your destination, a detour to Wapakoneta and the Armstrong Air and Space Museum is well worth the time, and a shorter trip than Armstrong made back in July 1969.
As it happens, from 1979 to 1984, the Holiday Inn located next door to the museum hosted a small science fiction convention, Spacecon. Fen Bill Bowers and Rusty Hevelin determined that fans traveling along I-75 from Michigan to Ohio (or vice versa) tended to have strange breakdowns near Wapakoneta. They decided that as long as fans were going to break down in the “Wapakoneta Triangle” anyway, they should have something to do, so they established a small relaxacon to give people an actual reason to travel to Wapakoneta. 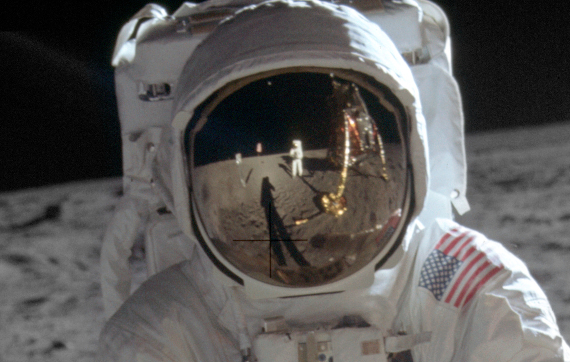 Steam & Strategem by Christopher Hoare is billed as a steampunk adventure, but the author’s astute attention to detail in this novel of the Regency era could just as easily qualify this work as an adventure in alternate history.

On Politics and Fandom