The pace of new SF Romance releases is picking up steam, as are the reads! 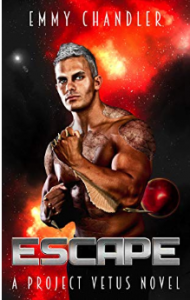 The pace of new releases in science fiction romance seems to be picking up as we enter the last few months of the year. I tried to select an interesting and representative assortment for you this week.

Escape (Project Vetus 1) by Emmy Chandler, is a spin off from her excellent, if gritty and grim Prison Planet series. I believe the action in this latest novel also occurs on the dreaded planet Rhodon, where convicts are forced to fight to the death for an interstellar reality show. The story: Sentenced to death for war crimes they didn’t commit, Captain Carson Sotelo and his team were given a choice: die in disgrace, or live as something entirely new. Several dozen procedures and a medically induced coma later, they awoke on a prison planet as super-soldier prototypes, spliced with genes from an extinct alien species.

Sotelo’s altered body comes with strange abilities and built-in weapons, and when Universal Authority tests him in the field, combat awakens violent instincts and cryptic genetic memories from the beast they installed in his genetic code. He’s able to keep the beast on a leash—until the day he meets Lilliana Malone, and his inner alien decides she’s his mate.

Though Sotelo resists the beast’s barbaric courtship style, he can’t pretend he doesn’t want Lilli. Her protective nature and fiery spirit remind him of why he went to war in the first place. Unfortunately, catching Sotelo’s eye also brings her to the attention of the ruthless team of scientists who turned his entire team into monsters…

Universal Authority had no idea what they were unleashing when they turned Sotelo into a weapon, and now that he has someone to fight for, he will bite off the hand that feeds them all, if that’s what it takes to get the team he leads and the woman he loves off the planet. 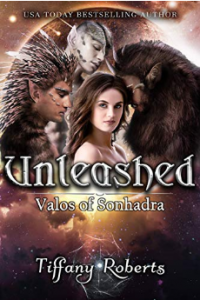 Unleashed: Valos of Sonhadra by Tiffany Roberts is the latest entry in the connected Sonhadra series written by various authors. I find Roberts to be a reliably enjoyable author (‘she’ is actually a husband and wife duo) and this time they’re tackling a reverse harem situation, which isn’t necessarily my thing but I’ll be curious to see how it all gets handled by a favorite writer. (Reverse harem is a very hot trope in all romance genres right now.) This book is a continuation of the story in Undying, Roberts’s previous Sonhadra novel, which I totally loved. The blurb: Despite the shelter her adoptive parents have provided her entire life, Nina’s psychic abilities have always hung over her like a shadow. The very powers that should give her strength have driven her to isolate herself. But lately, her craving for companionship — a mate — has become stronger than her fear. One foolish decision puts her life at great risk. And also provides a wondrous discovery…

Aduun, Vortok, and Balir have existed in a state of constant rage and ravenous hunger for centuries, locked away in the beastly forms that were forced upon them. Their only thoughts were of revenge on their Creator — until a mysterious female falls into their underground prison, restoring their heartstones and their sanity. They know nothing about her, yet she may be their only chance at reclaiming their freedom.

Unable to deny their intense attraction, they set out together to escape their Creator’s trap and rescue their lost people. Can they keep Nina safe and persevere in a world designed to destroy them? 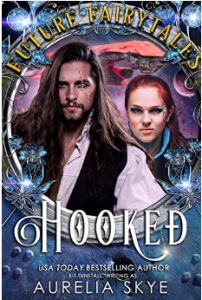 Moving to something a little less grim, there’s an entire subgenre in science fiction romance where authors reimagine favorite fairy tales with SF overtones. A good recent example is Hooked (Future Fairytales) by Aurelia Skye. Here’s the retold tale:  If you think you know the story of “Peter Pan,” think again.

Wendy Darling is a disgruntled employee at Lost Boys Clubhouse on planet Neverland and technically involved with Peter Pan, but he’s too busy for her and always flirting with Tink. He’s also totally immature and refuses to grow up, so that’s why she’s leaving him. The arrival of James Hook, in search of something Pan stole from him, derails her plans to return to New London when he kidnaps her and takes her aboard the Jolly Roger. As they set off on an adventure that spans the galaxy while evading Admiral Croc, who’s on James’s tail, Wendy soon realizes she doesn’t need a boy when she can have a man. 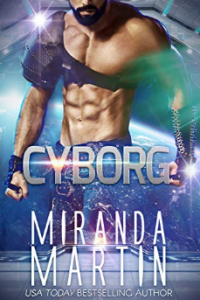 If it’s a day ending in ‘y’, then we must include a cyborg novel! The selection for this post in entitled simply Cyborg, by Miranda Martin and it hits all the necessary feels for a good read. The blurb: A past she can’t remember, one she chose to eliminate. A man, more machine than human, who chose to give away his humanity.

Cersei is on the run. She doesn’t remember from who, or why. While working in a high-tech bar, someone or some thing tries to activate her. The mind-wipe she paid top credits for starts to break down and her past bleeds through. The images are enough to convince her she was right. She doesn’t want to face who she used to be.

Now she has to run before she falls into their hands. Who are they? Well, there’s a shitty side to not remembering. Everyone is an enemy or a potential one.

Holden left the Galactic Service more machine than man. Passing his days designing security tech for those with the credits to pay, his Code is all he has left. When one of his clients misuses his tech, he sets out to put things right and collides into his only failed case. The hauntingly beautiful and seductive psi-op agent is on the run and isn’t acting anything like the woman he tracked for years, never managing to capture.

Thrown together against impossible odds, his greatest enemy is his only ally. How many lives will be lost if the two can’t learn to work as one? As dangerous as she is, it quickly becomes apparent she’s even more dangerous to his heart, the one he thought he left behind with the rest of his body parts in the Galactic Service. 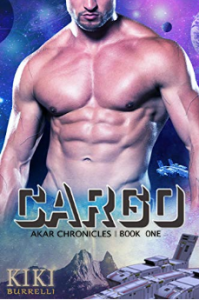 Cargo (Akar Chronicles Book One) by Kiki Burrelli is an exciting tale that kicks off a new series, beginning in a nightclub and moving into the stars. The plot: Lust at first sight…Phoenix spots the tall, dark and dangerously sexy man in line behind him at the club immediately. He thinks he’s found a dance partner for the night, but the stranger has other plans.

Jax has worked his entire life to become the best sourcer on Akar, maybe even in all of Zila Galaxy. He specializes in finding things, and if the money is right, he and his loyal crew are there. Except, this mission has sent them farther than they’ve gone before, to Earth.

Grows into an unbreakable bond…It’s not personal, Phoenix just happened to be what Jax’s client requested. He’s not a person, he’s cargo. Except, the moment Jax gets Phoenix on his ship, he can’t help but care for and protect the Earthling. It wouldn’t be so bad if the client who requested Phoenix—as well as the other specimens with his unique genetic mutation—didn’t happen to be the Akarian Federation. The AkarFed rules its people with an iron fist and they couldn’t care less about Jax’s burgeoning feelings.

Phoenix may be in space, with no hope of returning to his home, but he is nobody’s victim. All he needs to do is ignore the alien captain long enough to figure out a way home. But, with each passing moment—and mile—that gets harder to do.

As their connection grows, Jax discovers they are more than just cargo and captain, they are fated mates, now he just needs to figure out how to keep them together. 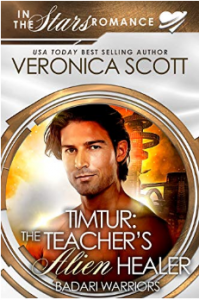 I’m going to end with my own latest new release in the Badari Warriors series about genetically engineered soldiers of the far future. The title was Timtur: The Teacher’s Alien Healer and here’s the story:  Far from her home in the human Sectors after the mass kidnapping, teacher Lily Garrison is making a niche for herself in the valley by running a school for the Badari young. Although she yearns for Timtur, the pack’s healer, another Badari male has his eye on her and won’t take no for an answer.

Timtur feels the weight and responsibility of being the pack’s only healer, constantly on call as the soldiers fight ferocious battles against the alien scientists and their troops. With scarcely a moment to himself, he’s drawn to the gentle Lily but worries he won’t be able to juggle his duties, his loyalty to the pack and a relationship with a human woman.

When Lily’s stalker takes direct action to kidnap her and steal her from the safety of the valley, she’s forced to reach deep inside to find the strength to battle for her life. Timtur realizes too late how foolish he’s been to resist the bond with his fated mate and leads the rescue effort.

Before this situation can be resolved both will have to put their lives on the line and decide what really matters in a dangerous world ruled by the enemy.

As we edge toward November, here’s to lots of good science fiction romance reading!

An Israeli ‘zine, a fine collection of other zines reviewed and – a new title banner!

SFWA Joins Other Writer’s Orgs in Protesting Invasion of Ukraine

On Style Manuals and Pinkerisms of Steve