“I wish I were a fireball…Romantic Musicals in space 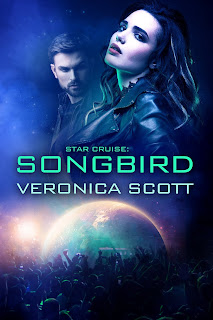 Our topic this week at the SFF Seven is “Your book as a musical: which book would you choose to have made into a musical and which composer/lyricist/songwriter would you have score it?”
No problem answering this one – I wrote a science fiction rock star romance so let’s make that one a full blown musical! Here’s the story of Star Cruise: Songbird: Grant Barton, a Security Officer on the Nebula Zephyr, is less than thrilled with his current assignment to guard an Interstellar singing sensation while she’s on board the ship. It doesn’t help that he and his military war bird Valkyr are dealing with their recent separation from the Sectors Special Forces and uncertainty over their future, with their own planet in ruins. Karissa Dawnstar is on top of the charts and seemingly has it all – talent, fame, fortune and devoted fans, but behind her brave smile and upbeat lyrics she hides an aching heart. When a publicity stunt goes wrong, Karissa finds herself in the arms of the security officer assigned to protect her – and discovers a mutual attraction she can’t ignore.
Trouble continues to plague the pair, driving a wedge between them and leaving Grant certain that Karissa is in more danger than she realizes, from overzealous fans and her own management. Grant is determined to protect Karissa whether she wants his help or not. Can he discover the truth behind what’s going on before he loses Karissa or is there someone else plotting to keep them apart – permanently?
I love the rock star romance genre and among my favorites are Nalini Singh’s Rock Kiss series, J T Geissinger, Liora Blake…plus movies such as “The Bodyguard” and “Beyond the Lights”.  That, and my fascination with any number of behind the scenes documentaries about rock tours, helped influence me when I was writing this book. I think it’d be fairly easy to turn the storyline into a musical, with Karissa, the rock star in question singing full out production numbers during the stage shows and a pensive ballad or two when the romantic hard times occur. I’d love to have someone create the pulse pounding finale song, which Karissa has written as a tribute to her love for Grant.

Can we get the antigrav dancers too? Oh and the two alien birds?

I’m not too up on composers and etc. I like what I like and I don’t analyze the details too much. Probably if one of the current rock stars could be interested in creating songs for the movie, we’d be in great shape! Katy, Taylor, Beyonce, GaGa….I kind of rattle around in my musical tastes from
vintage rock to Disney tunes to 1930’s and 1940’s musicals to Rodgers & Hammerstein to country to Backstreet Boys to certain current artists to…well, you get the picture.
So I say let’s put together the movie deal and see what happens! Let’s make a musical! 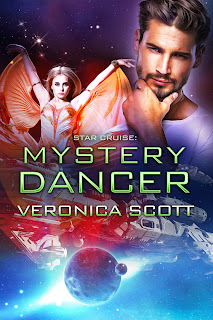 Now if we wanted a musical that was more about the dancing, Star Cruise: Mystery Dancer would be ideal and could feature different dance production numbers from the audition  montage to the finale, as well as a ballad or two for those moments when the heroine reflects on her tragic past or the destiny facing her or the impossibility of her love for the hero (but of course we all know that turns out fine by the closing curtain)…
Here’s the plot: Tassia Megg is a woman on the run after the death of her elderly guardian. She needs to get off the planet in a hurry when chance directs her to an open dance audition for the luxury cruise liner Nebula Zephyr’s resident troupe. One thing Tassia can do is dance.
Security Officer Liam Austin is suspicious of the newest performer to join the Comettes. She shows all the signs of being a woman on the run and seems to fit the Sectors-wide broadcast description of a missing thief, accused of stealing priceless artifacts. As he gets to know Tassia during the cruise, he starts to wonder if she’s something more – a long vanished princess in hiding from deadly political enemies of her family perhaps?
And what’s the story with the three eyed feline companion other crew members swear Tassia brought aboard the ship? Does the animal even exist?
As the ship approaches its next port of call, all the issues come to a boil and Liam must decide if he’ll step in to help Tassia or betray her. F’rrh the alien cat is the key to the mystery and Tassia’s fate.
A science fiction romance take on the Anastasia tale…

If it seems like I’ve had it too easy answering this week’s question, I’ll offer you a third choice that doesn’t ‘star’ a singer or a dancer – Trapped on Talonque. 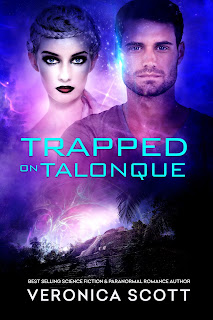 Here’s the plot and then I’ll explain my vision for the musical: Will an alien sleeping beauty awaken to save him, or to destroy everyone around her?

Space Marine Nate Reilly and his Special Forces team are in deep trouble. Prisoners on a backward alien planet, they’re brought before an alien ‘goddess’, sleeping in her high tech seclusion. Nate is astonished when she awakes and establishes a psychic link with him. But her news is not good–he and his men must win a brutal challenge set by their captors, or they will die. She’ll give her aid, but in the end their courage and strength must win the contest.
Bithia sleeps in her chamber, as she has for thousands of years, since her own people unaccountably left her there. Viewed as a goddess by her captors, she must hide her ancient secrets to survive. But only the bravest of men may free her. Can she use her psychic powers to keep Nate and his men alive long enough to help her escape, or will her only hope of freedom die with them?
I could envision some really heart rending duets, with the trapped alien heroine and the stalwart human Special Forces soldier, as they meet in
dreams, and of course a triumphantly happy one at the end of the book. I could see a certain sporting event set to music, lots of quick cuts and pulse
pounding rock beats…the soldier vowing revenge after one of his men is murdered in their captivity, which could make for a powerful song of defiance and determination…perhaps one of the scenes with the planet’s inhabitants conducting a ceremony which would allow for a fantastic set piece…there’s a sort of light hearted village dance toward the end…of course a love song, on the beach…and a rousing instrumental anthem as the happy ending is achieved (no spoilers from me). I’m not as excited about this one, probably because I never envisioned it as a musical but hey, if Lord of the Rings can be done as a stage musical, why not? Happy reading!

Now, apparently, part of a series detailing the death of various industries caused by Artificial Intelligence. In this episode – Costume Design.

After such little theatrical representation in the Hugo Award for Dramatic Representation, should there be a separate award for SF Theatre?

What Is All This Then?