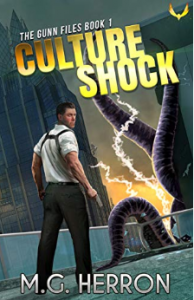 I was drawn in by the cover of M. G. Herron’s Culture Shock: A First Contact Mystery Thriller (The Gunn Files Book 1) – a mix of noir-but-modern detective type tale and old time science fiction, with the tentacled creatures on the loose. Sounded so promising – who could resist? When I read the book’s blurb I was sold and I have to say I loved the novel. Naturally I had to track down the author and pepper him with questions!

Here’s the story (courtesy of Aethon Books): Aliens are among us, and Austin, Texas just got a whole lot weirder.

When smart-aleck, down-on-his-luck bounty hunter Anderson Gunn snags his next job, he’s just happy to get the gig. The target he’s chasing may be wanted for murder, but his bills aren’t going to pay themselves.

As it turns out, he probably should’ve been more selective. When he tracks down Cameron Kovak, the wanted man turns out to be no man at all.

Gunn finds himself face to face with a tentacled creature out of Ridley Scott’s worst nightmare – a baby Cthulhu, wearing his target’s skin like a onesie. And that’s just the start of it. Aliens have their eyes on us, and Gunn finds himself swept up in their mysterious plans.

Veronica Scott for Amazing Stories Magazine: What were your major influences when writing Culture Shock and the series it kicks off?

MGH: My books often come from the confluence of two or more interesting ideas. I drew inspiration for Culture Shock and the science fiction world it takes place in from many places, but if I had to pick three, they would be:

I live in Austin, so that first one’s easy. I moved here in 2012, met the girl of my dreams here, got married here. Austin is my adopted city and where I spend my days. I wrote my first book here. I bought my first house here. I have a deep and abiding love for Austin, and I poured all of my favorite parts of Austin’s culture into the book—the eastside and its divey bars and live music, Sixth Street on a crowded night, The Museum of the Weird, breakfast tacos, the Hill Country… It all comes from my love of Austin. I’ve heard from many readers who know Austin and have read the book―it’s one of the aspects they love most. The setting grounds the story while simultaneously giving me an opportunity to shape its landscape.

The second influence is my enjoyment, as a reader, of popular paranormal detective books and TV shows. I thought it would be fun to make a science fiction version of the broke, down-on-his-luck paranormal sleuth. Since most of those books are fantasy, this is my way of turning the trope on its head.

Number three didn’t actually occur to me until I started thinking about how to market the book. What other books like The Gunn Files are out there? Many stories through recent decades have explored aliens on Earth. But the humor of Will Smith’s first ‘Men in Black’ film was a real pop culture watershed moment, and I realized I had drawn a similar tone into my book. Witty with a fistful of action—that’s Anderson Gunn’s jam.

ASM: I’ve been to Austin and I definitely loved it there, and felt the detailed setting added so much to the depth of the story experience. I also definitely caught the ‘Men in Black’ type vibe but to me it as you said, as if we were looking at the MIB trope from a totally different perspective, which I relished. The book stakes out its own territory in the genre.  How tricky was it to write a detective story and a science fiction story in one? Biggest challenge?

MGH: The trickiest part was trying to figure out how to balance the detective tropes while placing the story in a firmly science fiction universe. Any good detective story has a mystery, a case, to solve, and this story is no different. Part of the fun is inventing the mystery—not only solving the puzzle, but creating it in the first place.

Sometimes it can feel like building the airplane as you’re plummeting to the ground, but on other days they flow seamlessly into one another. The wings catch the wind and you soar. Those are the best writing days.

ASM: One thing I really enjoyed about the book was the amazing amount of detail (scents, foods, colors, furnishings etc.) you seamlessly incorporate to set scenes for the reader. What’s your process? Do the details come in the first draft or do you revise a lot or?

MGH: It helps, first of all, that I know this city so well. I’ve written about countries in alternate futures, about planets in far-away galaxies… and the difficult part of those books is that, in order to set the story on those worlds, you first have to invent them.

Culture Shock was a different beast because I could draw so heavily from my memories of the city and my own experiences. I distinctly remember writing a scene with the Frost Tower in Culture Shock, then driving my Jeep downtown to gaze up at the actual Frost Tower and orient myself to verify the choreography of the scene. Our heroes entered the building through that alley. Detective Gonzalez parks on this side of the one-way street.

I took great joy in selecting details. I retrofitted some scenes in the second draft to fit the reality of the world. I made up other details, altering geography and landscape as I saw fit. I hope readers will forgive me for taking some liberties, but it’s just so much fun to imagine an alien nightclub beneath The Museum of the Weird.

ASM: The alien nightclub scenes were terrific and so well described. I want to go there someday. Which was the most difficult character to write and why?

MGH: I guess it depends what you mean by most difficult. I spent the most time on Anderson Gunn, since he’s the main character and I needed to know his voice as well as his mannerisms and past. But it is arguably harder to draw a three-dimensional secondary character. Annabelle Summers and Detective Sheila Gonzalez both went through several revisions to become the women they are today, both so different and yet so similar in their stubbornness.

ASM: I always appreciate strong female characters and thought you did a great job in making Summers and Gonzalez standouts. I hope to see a lot more of both. (We could have a Gonzalez spinoff!) A certain alien Peacekeeper was pretty hardcore too. Is there a TV show or movie you’ve recently binge watched (or enjoy so much you tend to re-watch it often)?

MGH: I recently rewatched the beginning of ‘Battlestar Galactica’, which I think is one of the best science fiction TV shows of all time. I don’t often re-watch TV shows, which says a lot about how much I admire that show. ‘The Mandalorian’ is arguably the best work done in the Star Wars universe in decades. ‘Fringe’, the science fiction mystery show I mentioned above, is hugely underrated and extremely well written. I’m a big fan of the characters in that show: Olivia Dunham (the detective) and Walter Bishop (the mad scientist).

MGH: I’m working on the first book in a Space Opera series right now. Book four of The Gunn Files is on deck. I don’t have a title for it yet, but it’s going to be an absolute blast to write. When you see how book three ends, you’ll understand why. 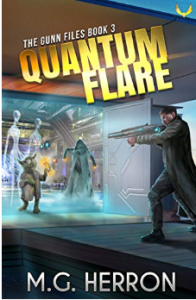 ASM: I’ve got book three pre-ordered. What’s on your To Be Read list?

The Last Emperox by John Scalzi

For more about M. G. Herron and his books visit https://mgherron.com/

Voice actor Brad Wills talks about his craft and how he came to narrate books.

Just like every high-quality short story, it doesn’t have to be complicated to be good. To prove that, ﻿dailysciencefiction.com has provided a convenient outlet for finding well written original work in the genre.

An Interview with Tang Fei on her Short Story, A Universal Elegy