Recently I read one of the more unusual science fiction romances to come my way, Bioluminescent (The Mimics Book 1) by Auryn Hadley 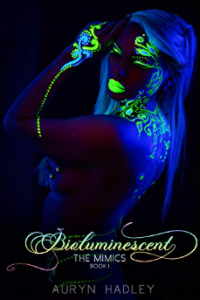 Recently I read one of the more unusual science fiction romances to come my way, Bioluminescent (The Mimics Book 1) by Auryn Hadley.  The alien characters had been crafted with an abundance of fascinating details, obviously backed by well thought out science, the events were strikingly reflective of current events and the human heroine had quite a growth arc. Not only that, I don’t usually read anything but M/F romance and it became apparent this series is going down a different route, with some complicated romantic times ahead, I predict…but I kept reading. I was seriously hooked, so much so that even a semi-cliffhanger ending didn’t deter me.

So I was very excited to have the opportunity to interview the author and learn more. I have tremendous enthusiasm for this novel

Here’s the blurb: They look like us, know all about us, and can even blend in perfectly.  That doesn’t make them human.

When an alien science vessel crashes into the shore of Haven, Hailey has a front row seat.  Little does she know that her normal life is about to be turned upside down by the man she bumps into on her way home. He looks completely human.

He also can’t stop thinking about her.  There’s something about this girl but he can’t quite figure out what it is. Humans are aggressive and primitive, but she’s nothing like that.  He only knows because he can’t make himself stay away from her.

And she’s the only one not getting sick.

Because the crash brought more than just strange aliens to Earth.  It also released bacteria that humans have never experienced. The clock is ticking and human medicine can’t even detect the pathogens spreading through the population.  Humanity’s only hope for survival lies with one alien doctor – and he needs a miracle. Lucky for him, it comes in the form of the woman he can’t get enough of.

Helping him might kill her.  Not helping definitely will. Introducing her to the rest of his people?  Well, it might be the riskiest move yet – because he won’t be the only one unable to resist her allure. But if they want to get back to their homeworld, sacrifices will need to be made.

Something has to give.  The only question is what.

Veronica Scott for Amazing Stories: What were your major influences when writing the book?

AH: When writing my books, almost all of them are inspired by some form of current events simply because it’s relevant to our lives as readers (because I’m a reader too).  In the case of the Mimics series, it started with Stephen Hawking.  He once made a comment about how the greatest threat of aliens wouldn’t be their technology or warmongering (paraphrased by me) but rather the inherent bacteria they lived in tandem with.  Combined with the rush of epidemics in the late 20-teens (Ebola, SARS, bird flu, etc) and I wondered what would happen with an infusion of truly foreign biological compounds.

But who wants to read a textbook, right?  A story that focuses too much on the geekery of that would be yawn-inducing.  So, I chose to focus more on the character aspects.  The concept of what people would do if their world was changing quickly.  I have always believed that character-based stories are much more immersive than data-based ones.

I make no secret of the fact that I often have books in the background that I work on.  The Mimics series is one of those.  I began writing book 1 around four years ago.  I took my time with the research, and I’ve had fun with the idea of how the world would change once we realize we’re no longer alone in the universe – without following the overused tropes of modern movies.

So, a lot of my influences were seeing the same thing accepted as “fact” in our entertainment.  I guess I have more faith in humanity than most?  I honestly don’t know.  But I enjoy pondering the possibilities of the human situation.  Love is never going to go away.  Nor is the inherent human urge to overcome the things holding us back.  But, if humanity is considered to be so aggressive, then what would the opposite look like?

I’m also a romance author.  While my books tend to be “plot-heavy,” I don’t think that detracts from the ability to weave in a good love story.  In fact, I find it makes things easier.  It gives conflict to the blossoming love, and that love gives motivation to the characters.  Love also raises the risks involved with failing, which adds a wonderful amount of tension.

ASM.:  What kind of research did you do? The Gahneks were fascinating with their use of colors and barbs…and the idea of not being the top of the food chain on their own planet.

AH: Most life on Earth share similarities.  Mammals always have 4 limbs, as an example.  Not 6, not 8.  Why?  There are certain things we accept as normal, such as dogs marking their territory with scent.  And, we always see sentience correlated with predatory behaviors.

So, what if I changed that up a bit?  Color instead of smell, prey instead of predator, and so on.  Of course, I researched – and found many of the best examples in marine life.  Defensive techniques are common.  Octopuses are known to be amazingly intelligent.  And the further I fell down that rabbit hole, the more convinced I was that I wanted to use many of their traits.  Squid, cuttlefish, and such also have chromatophores and often poisons.

Now, I studied genetics and evolution in university, so I have a solid starting point for many of my ideas.  For me, the idea of an evolutionary line is fun to just think about.  Since it is fiction, I’m able to make a few jumps of logic and then use known science to reinforce it.

I think my greatest research was on medical techniques for pandemics.  Ironically, this book was written before Covid happened, so the response and decisions were based on overall international pandemic reactions through modern history in general.

AH: I would say that’s Jared.  He has a very interesting arc in this series, and while I happen to know it, he doesn’t.  I have to work to keep his reactions consistent with his duties and responsibilities.  That means a lot of double-checking so I don’t give away the good stuff!

The aliens were actually pretty easy, and Hailey had a habit of taking over the plot.  She knew exactly what she was willing and not willing to do.  I always love it when the characters are strong enough to have their own opinions!

ASM.: I really liked Jared and had hopes he might get more to do in the future books so that’s good news for this reader. Is there a TV show or movie you’ve recently binge watched?

AH: I actually can’t handle much television.  I always feel like too much of the story has to be condensed to fit into time constraints.  Plus, I’m usually writing the next book.  I’m a bit of a workaholic like that.

ASM.: The cover for Bioluminescent was so different and very striking! If you do the covers yourself, can you share a bit of your process with our readers?

AH: For the Mimics series, I did that cover myself.  I did study design, so I have a slight advantage, but the stock images were just too fitting for this series.  The color, the story on her skin, and the reason it gets there is pretty much the point of the first book.

My process for designing a cover is simple.  It needs to draw the eye, give a general idea of the feel – in this case, it’s sci-fi and romance.  I also want to make sure that the viewer is left with enough curiosity to read the blurb, and hopefully even open the book.

With so many indie authors, and the prevalence of such varied stories being so available, we (authors) have to make an impact fast (visually) and make sure it’s appealing enough for the viewer to invest in.  No one wants to waste their time, so we make quick decisions thanks to the massive amount of choices.  My cover should stand out, be unique enough to be remembered, and hopefully fit the story while giving an emotional feeling of what’s inside the book.  I think this one does exactly that.

ASM.: All the details of the markings Hailey ended up with were terrific and the reasons behind each that she received or asked for were compelling. (I won;t give any spoilers.) What’s next for you? 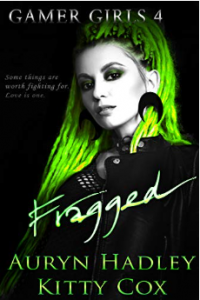 AH: Oh boy, that’s actually a loaded question.  I am currently finishing up a few open series: Demons Muse and Gamer Girls (written with Kitty Cox).  Once those are complete, I have a cute reverse harem wolf-shifter story coming out, and then some more paranormal romances.  I find that when I break up genres, my mind doesn’t get burned out on writing.  I can alternate between heavier and more serious epic sagas, such as the Mimics series, and lighter works, such as my upcoming trilogy, Wolves Next Door.

The best part, though, is that while I work on something else, I often realize new and interesting details to include, and unique plot twists to keep things from becoming stale.  And while I cross genres, I always use the setting that the story requires to be told.  It doesn’t matter if that’s fantasy, sci-fi, urban fantasy, or contemporary.  If adding in the mystical or futuristic doesn’t advance the plot in any way, then there’s no reason to do it.

After all, fiction is just about telling the truth inside the lies.  The lies are the world, the magic, and the potential possibilities.  The truth is the fundamental aspects of what it means to be human and to feel strongly about anything, including a lover.

AH: So, my not-so-secret guilty pleasure is reading period romances.  No, I don’t have a favorite author.  I seek out indies and lose myself in their stories.  I will never write that genre, so it’s a place where I can just relax and get lost for a bit.  Sometimes, when I need a mental break, I put everything aside, search kindle, and grab the first one that sounds interesting.

But I do have a love affair with romance, fantasy, and softer science fiction.  I’m still trying to find some time to finish C. Cato’s Sentinels series.  Not only is it reverse harem science fantasy, but it’s also written by a woman of color with a black female main character.  With current events in America right now, it’s a wonderful and timely read.  I may also have a weakness for the blending of fantasy, science, and romance (since it’s what I often write), and it’s not easy to find all three in a plot-driven series.

For more about Auryn Hadley and her books visit https://aurynhadley.com/

Getting back together with Michael Swanwick, Launch Pad Workshop Alum

An interview with Joseba Paulorena, author of “Muerte en blanco”

End of the Year Review