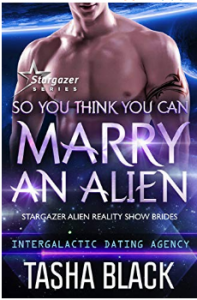 It’s the season for the Intergalactic Dating Agency new releases! I thought it would be fun to talk to the authors involved in the current set of books and find out what ‘sparked’ their stories, plus a few other interesting facts. I asked USA Today Best Selling author Tasha Black a few general questions about the series itself to set the stage.

Intergalactic Dating Agency series blurb: Looking for a love that’s out of this world? These strong, smart, sexy aliens are seeking mates from the Milky Way. Just hop onboard with your local Intergalactic Dating Agency and become an Alien Mail Order Bride! Our authors are exploring the friendly skies and beyond with trilogies of cosmic craving, astral adventure and otherworldly lovers. Warning: abductions may or may not be included! Putting the “sigh” and the “friction” in science fiction romance!

Veronica Scott for AMAZING STORIES MAGAZINE: What was the spark behind the shared universe?

TB: The Intergalactic Dating Agency was dreamed up by author V. Vaughn back in 2016 when she was eager to write an Earth-based series about sexy aliens. She invited a group of other authors to join her and many of us are still participating annually. Together we offer hungry readers a fun experience with plenty of books sharing the popular theme. And as authors we enjoy the camaraderie!

ASM.: What can readers expect in terms of more books to come?

TB: This season has a trilogy from each of the six 2019 participants! We take turns releasing the books in our individual series. This means you can get your hands on two new releases each week – or 18 books total this fall –  if you decide to follow all six series!

ASM: Who does your very effective covers?

TB: We work with the wonderfully talented Frauke Spanuth of Croco Designs. She created a simple but powerful design that we think beautifully captures the spirit of the series!

ASM.: Where can readers learn more?

TB: You can hang out with all of us in the Romancing the Alien Facebook group and you can learn more by checking out our website, which includes all series (past seasons and present) and author bios.

ASM.: Next we posed a few questions to each author on the most recent release in the series.

Tasha Black, So You Think You Can Marry an Alien: Stargazer Alien Reality Show Brides:

Story spark: The heroine of So You Think You Can Marry an Alien has been told she needs to lose twenty-five pounds, or the character she plays on a hit TV show will be killed off. The producers send her to a “weight loss resort” for celebrities. And when she busts out, her adventure begins!

The seed for this idea was planted when I read something last year about Drew Barrymore being forced to lose a lot of weight quickly in order for the producers of her show to give her a second season.

Reading this made steam come out of my ears. As far as I’m concerned, Drew Barrymore is a national treasure, and she is absolutely stunning at any weight.

It turns out that the story wasn’t true, thank goodness!

BUT the idea of it horrified me and it reminded me of my days as a stage actress when I had to sign contracts saying I wouldn’t gain or lose more than 2lbs, get a suntan, etc. because it was too hard for the wardrobe and makeup people if actors kept changing shape and complexion!

Nothing is more unpleasant than having someone else weigh in (no pun intended) on what you eat or look like. So I had a blast writing about a character who breaks all the rules!

TV show or movie to binge: I absolutely love ‘The Princess Bride’ and watch it all the time but especially when I have a cold and need cheering up. I’m scandalized to hear rumors about a remake!

To Be Read list: I’m about to start Wanderers by Chuck Wendig! I like reading books with a big cast of characters and I’m told this one won’t disappoint. I’ve also got a copy of Terry Bolryder’s The Dragon Nextdoor steaming up my Kindle and demanding to cut the line! 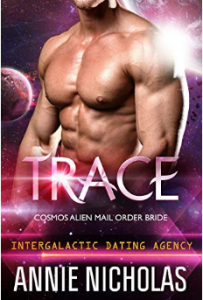 Cosmos Resort and Dating Agency, a place where aliens come to win the heart of a beautiful and rare human mate. Or that’s what the brochure says.

Story ‘spark’: ‘Fantasy Island’. The plane, the plane! Except with aliens and space shuttles. I LOVED that show with all my heart. My first crush was Ricardo Montalbán. For Cosmos Resorts, its Pete Peterson aka lizard man. I had a riot writing the first three books and can’t wait to write more.

TV series to binge: ‘The Great British Bake Off’, any sci-fi show Netflix releases, oh and I loved ‘The Expanse’. I love escaping to new worlds be it in science fiction or fantasy. Even the GBBO is a new world since baking in the UK is very different than what we do here.

To Be Read list: Presently reading Sapphire Flames by Ilona Andrews, next is A Local Habitation by Seanan McGuire (recommended to me by my readers.) 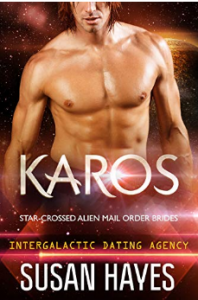 A bodyguard who can kick ass in high heels, and a war-weary dragon who is about to learn that love is the only battle you have to surrender to win.

Story ‘spark’: Karos’ storyline was a combination of things that all came together at 3 am one night. (Apparently, my muse is a night owl and has no respect for my body’s need for sleep.) A friend of mine serves in the navy and she’s First Nations, and it had been my plan to write a story about a heroine with a similar background. I also wanted to write a romance about a more mature couple. Then came the “what if” moment, where my muse woke me up to whisper, “What if she was a bodyguard and he kept trying to protect the protector?” And that was the beginning of the story.

TV series to binge: I recently finished binge-watching ‘Good Omens’. I devoured it! Great acting, fantastic writing, and I loved the bromance between the two leads. I’m also a huge fan of David Tennant’s work. 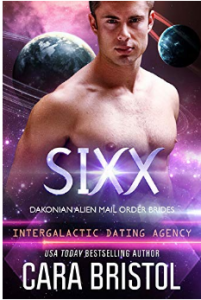 He’s the perfect man to share her life with. If only that life was on Earth.

Story ‘spark’: Sixx is a star-crossed lovers story. Sixx and Moxie find love early on but circumstances prevent them from having a future together. Moxie is a video game software developer. All her adult life she has been working toward her big dream: starting her own video game company. It is almost a reality when she meets Sixx. They both know right away they have something special. But Sixx is single dad who has to return to his son on Dakon, his home planet. He can’t stay on Earth. Moxie can’t go Dakon.

I don’t usually write about children in my romances, but once I made Sixx a single dad, I realized I could make kids and babies the theme of this set of Dakonian romances. In book 5, KORD, heroine Barb Quintain fears her horrible childhood will make her a bad mother, so she vows never to have kids. Hero Kord, of course, really wants children. And in BRAXX, book 6, the hero is a Big Brother to a little boy in foster care.

To Be Read list: My fellow Intergalactic Dating Agency authors’ books: Karos by Susan Hayes, Trace by Annie Nicholas, Malestrom by Elsa Jade, and Rozar by Sue Mercury. I’ve already finished Tasha Black’s So You Think You Can Marry An Alien. 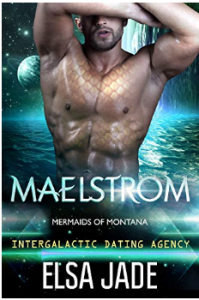 When a battle-scarred soldier of the seas comes to Earth to retrieve an alien mail order bride, will her fear of deep water tear them apart…or save his drowning world?

Story ‘spark’: Okay, I’m shameless. Jason Momoa in ‘Aquaman’ inspired me! But, I mean, nobody blames me, right?! Glistening hair, glistening muscles… My Tritonyri heroes in the Mermaids of Montana trilogy aren’t kings of their seas, though. They are simple warriors (yeah, with simply glistening hair and simply glistening muscles) who’ve fought long and hard to protect their waters, and now they just want a little peace and happiness. Which they’ll get, of course, because these are science fiction *romances*. But it’ll prolly take, oh, three books…

TV series to binge: This is kind of embarrassing to admit (is this my day for confessions?) but I’ve never seen ‘Supernatural’. Yes, I am FOURTEEN seasons behind, smh. I have decided to get caught up because I want to understand all the memes! And I’d like to see what viewers love about such a long-running show. But really I only watch TV during my bedtime snack, so it takes me three or four nights to get through an episode. Am I doing this binge thing right?

To Be Read list: My To Be Read Mountain is huuuuuge! I blame Veronica Scott for her sci-fi-fantasy-paranormal romance new releases list. 😉 In addition to the #IntergalacticDatingAgency books (which come out twice a week from mid-September through mid-November) I currently have Promise of Darkness by Bec McMaster and Fae King by Milly Taiden, which are both first books in new series, although undoubtedly I’ll have more when the next list comes out! I’ve also been re-reading Nalini Singh’s Guild Hunter books in prep for Archangel’s War, which I am NOT allowed to read until I get my next book written. (I’m totally lying to myself right now…) 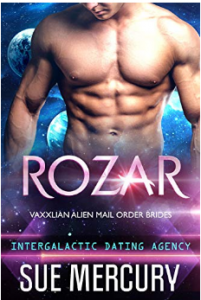 The otherworldly stranger is the biggest, fiercest looking alien warrior she’s ever seen…and she’s already agreed to become his mate.

Story spark: I’ve always wanted to write a book featuring a heroine in the Witness Protection Program. I figured being in WITSEC, and perhaps worried the bad guys would still manage to find you, would be a great reason for someone to sign up for an alien mail order bride program. If you leave Earth under another name, surely the bad guys will never find you. At least that’s what my heroine in Rozar thinks, but things don’t exactly go according to plan…

TV series to binge:  ‘Outlander’! I’ve read the books over and over again (they’re soooo good!) and love how the TV series pretty much follows the books.

To Be Read list: Next up on my Kindle are… Alien Breeder by Honey Phillips, Seeded by Loki Renard, Prisoner by Kallista Dane