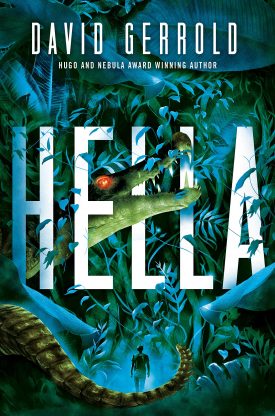 This may not be the best review I’ve ever written; it’s early in the day, I’m rushed and very tired.

If I were writinig this on Hella, none of those excuses would wash. There’s just too much to do, too few colonists, too many existential threats, the up-coming migration to the winter colony site and, on top of everything else, new colonists have arrived and they want to land, colony leaders are facing a leadership crisis, and Kyle, our young protagonist, is having his own coming-of-age issues as he begins to assume adult responsibilities, handle on-going childhood traumas (read – bullies), and reveal the wonders of Hella to us, the readers.

David Gerrold is one of the few authors in the SF pantheon who can manage to weave so many disparate elements together without losing a thread.

There are at least three elements of this novel that bear close examination and mention: the “Heinlein connection”, the ecology of the alien world Hella and the smooth, mature, seemingly effortless style.

Mentioning Heinlein and Gerrold in the same breath is not uncommon. More than many others, Gerrold has, in the past, taken many of the elements that make up a Heinlein novel and applied them to his own works with reconizably positive results. Hella, I think, represents the apotheosis of this relationship: Hella evokes some of the better Heinlein juveniles, such as Have Space Suit, Will Travel, or Tunnel in the Sky, at the very least in the manner that it presents its main character, Kyle. Yes, he’s just shy of being an adult, but he’s dealing with adult issues and conflicts. More importantly, he’s positioned in society in such a manner – in it but not yet responsible for it, that allows him to observe it as both an insider and an outsider, still plastic enough to question some of its assumptions and to ask uncomfortable questions. This is perhaps the core appeal of such stories to so many adult readers as they can see their own passage into the adult world through their eyes, whether or not it is still taking place or is the stuff of memory.

Hella, though, is not a Young Adult book.  It’s an adult book with some primary characters who are near adult.  It should appeal (and is appropriate for) audiences of all ages.

And that Heinlein thing?  We use “like Heinlein” to convey to readers that a story has a certain feel, a certain treatment, a certain way of approaching and presenting issues that we find exemplary, thought-provoking, exciting.  Hella is certainly all of those things and perhaps it is time to begin substituting “Like a Gerrold story”.  Heinlein is gone more than thirty years now.

One element that has become a hallmark of Gerrold stories are the fantastical ecologies that he presents.  Here I’ll invoke another storied name:  Stanley Weinbaum.  Weinbaum’s A Martian Odyssey opened up the eyes of SF readers like no other author before him.  His presentation of Tweel, the first alien to “think as good as a man but not like a man” has overshadowed the other wonderous thing Weinbaum did:  he created an entirely alien biology for the red planet, one filled with eye-catching wonder after wonder.

David Gerrold gave full expression to alien ecologies in his Chtorr series, and continues to do so with Hella, where planetary forces have led to a landscape full of gigantisms.  Reading along is akin to watching an Attenborough-narrated nature documentary.  You’ll be left wanting more.

And then there’s the story itself.  Yes, like all good science fiction these days, you will find commentary on our reality;  elements of issues we face today are woven in to the plot, some points are made regarding the rightness or wrongness of various ideas and concepts and satisfying comeuppances are offered.  You’ll not mind.  In fact, you’ll probably find yourself cheering.

No, I’ve not yet given you a summary of the plot, so here goes:  Hella is a colony established on a world with lighter gravity and higher oxygen content than Earth.  It’s been populated by several trips of a colony ship, but, although several generations have come and gone, it still exists on a knife’s edge of viability.  The landscape is populated with creatures of brobdinagian proportions, monster storms, long, long days and a great deal of uncertainty.  The colonists are still learning new things about their new home every day.

Into this background steps Kyle, a brilliant boy who is coming of age, beginning to take on adult responsibilities, but ones conflicted by the fact that Kyle is a freak, a child requiring a brain implant in order to function.  He’s different than his peers and this naturally makes him a target for bullying.  He’s well supported by his mother, a colony leader, his older brother and some family friends when his victimization at the hands of a long-time bully reveals a deeper plot regarding a threat to the leadership of the colony.

In this week’s viewing: 2022 is off and running with the first batch of winter premieres.

He’s the Bone Crusher. A man in a mask. His face is hidden alongside his intentions.