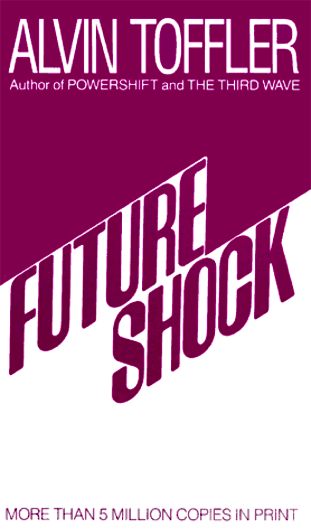 When anatomically modern humans developed consciousness 50,000 years ago (or whenever), it’s because they started developing a sense of their place in the world and this included a sense of time. Time in the present. Time in the future. We became Time Travelers of a kind. Let me explain.

One of the most influential books in my life was (is, always will be) Alvin Toffler’s Future Shock. It lead, of course, to influence John Brunner who soon after wrote one of his masterpieces, Shockwave Rider. It was an extremely influential book and it relates to Moore’s Law (that computer technology obsoletes itself every 18 months) and it also is the main trope to R.A. Lafferty’s small masterpiece “A Slow Tuesday Night”. But I digress. In this blog entry I want to approach some of the issues that come out of Toffler and are sometimes addressed in science fiction.

One of the more salient details mentioned in Future Shock is that we have two senses of Time. One is the here-and-now, my-life: time as perceived as we live our lives grounded in the present moment of our actual lives. The other sense of Time is a more objectified time wherein we have a broader, more realistically conceptualized sense of what’s happening in the actual world around us. The two senses–both carried at the same time in our pre-conscious minds–are not at all the same.

For example, some people believe–actually believe–that the world was created 6,000 years ago and that it’ll end soon when Jesus returns. My father was one such person. But in their real lives, they go about their daily affairs and experience a world where evolution is all about them and there is no real sense that the stories of Revelation are about to happen. People save for the future; invest in school for their grandkids; plan their retirement; dodge taxes and hope to get tickets for next year’s Super Bowl. They have a future sense that guides their every move. A person beside you on the bus to work can have his head in a very primitive mind-set, yet he’s completely civilized and cordial when you have dealings with them.

It can apply to politics, as we all know. A Doc Savage buddy of mine, who I love dearly, truly believes that President Obama is going to take everyone’s guns away. His posts on Facebook are filled with Second Amendment rants and raves and his Friends (who are not Friends of mine) all call for the impeachment of our obviously Socialist/Marxist president.

Yet, our president isn’t at work massing armies in the Mojave Desert getting ready to roll into L.A. and start taking away my friends guns. At no time has he tried to enforce his Kenyan Socialism (a term from Newt Gingrich) because he is not a Kenyan Socialist. (Of course, if you believe he is, then it proves Toffler’s point.)

Yet, my friend gets up, goes to work, pays his bills, raises his kids and his grandkids, watches TV, shops at Costco as if all is right with the world. And it is. This is because we carry around two different perceived worlds, yet both are held dear.

How does this apply to science fiction? Toffler calls these mutually opposing senses of what’s to come our future sense. What we believe and what we experience helps shape the future. It also helps us predict it. For example, in an earlier blog I wrote about the “easy apocalypse” wherein I railed at all of the novels and short stories appearing in the field now about climate change disasters. Mostly in that blog I railed against climate change disasters as the low-hanging fruit–imaginatively speaking–around which to shape a story. Boring!

Yet through the way we are living in the here-and-now with both the Antarctic and Arctic ice melting and temperatures rising everywhere across the globe (and the tons of pollutants pumped into the air and down into watersheds through fracking) it’s all actually happening. What’s good about these novels centered around climate change is that, in the here-and-now, writers are actually expressing their hidden fears (what they believe as opposed to what actually is happening) and projecting them onto a fictive framework. Because right now it isn’t that bad. At least in America. Central China is a different story where you can cut the air with a knife.

So a person in a more predictive mode can look at the here-and-now and literally “see” into the future. For example, we live in a drug-oriented culture (starting with an alcohol culture of the Fifties–see the stories of John Cheever and John Updike) and we now have marijuana legalization on the horizon. And thanks to the Supreme Court last week, we’re going to have legal same-sex marriages everywhere. And marijuana will become legalized within two years. What else will change?

For one thing, this will be the century of women. Our next several presidents are going to be women, both on the left and the right. And our grandkids are going to be of wildly mixed races, so much so that only the most isolated cultures will remain racially distinct. It’s also very possible that fewer and fewer people are going to be a member of an official organized religion. (Spirituality, as you know, has nothing to do with religion. That will always be with us.)

Look at what people fear for the future. Then look at how they are doing in the lives that they are living at the moment. As a futurist and a science fiction writer, I’m excited by all of the possibilities and I love watching our politicians in Washington fight the waves of change. Their perceived worlds are in jeopardy. That’s because they’re experiencing future shock. They know what’s coming and feel threatened.

I, on the other hand, rejoice.

Are You a Closet Synesthete?

I’m in Love With a Zombie

Foundation and Empire presents the Foundation with a challenge from a past that cements it’s position, then knocks everything out of kilter – subverting the whole series.