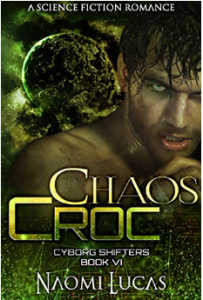 Jumping right into the newest science fiction romance releases, the cyborg story for this post is Chaos Croc  (Cyborg Shifters Book 6) by Naomi Lucas, who is renowned among SFR readers for her unusual cyborgs. The plot:  Janet was a maneater.

She knew what men wanted, took what she pleased and used that to her advantage. But the men who lived in the small colonies on her home planet were not the same as those who traveled and conquered the universe. They were nothing like the Cyborgs who showed up to solve all her family’s problems, especially the green-eyed god who crowded her space.

So she used him like she used the rest—and bit off far more than she could ever chew.

Zeph carried a demon on his back, one that scratched at the inside of his skull relentlessly. No one would guess that the neon green knight had a terrible secret, not with his charm and his lies. And because of his charisma, his razzle-dazzle darkness, the EPED used him for all he was worth. But sometimes missions can’t be fixed with diplomacy. Sometimes you have to follow your own instincts—even a croc’s instincts—to go after what you really want.

He wanted Janet. He wanted to keep her.

But the demon wanted something else entirely. 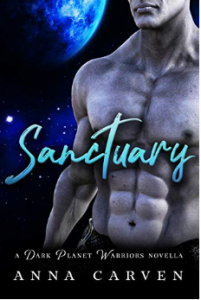 Anna Carven’s Dark Planet Warriors is one of my personal favorite SFR series and I was happy to see Sanctuary, which the author calls a novella although at 43K words it does qualify as a novel. I always enjoy slice of life looks at favorite characters. The story: Abbey goes shopping.

It’s just another day in the life of our fearsome Kordolians and their human mates. A light-hearted peek into Tarak and Abbey’s new life on Earth. 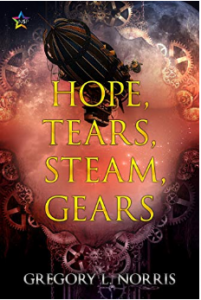 I love to be able to bring some steampunk into the mix and this month there are two to mention. First is Hope, Tears, Steam, Gears by Gregory L. Norris, with this blurb: At the request of the Earl of Kensington, Donovan Tisdale attends a mind-expanding presentation by Richard Sandominus Flynn, the Minster of Steam-based Sciences. Flynn reveals the next step in steam-based power—flights to the moon and far beyond conducted by mechanical men.

The attraction between Donovan and Flynn ignites from the moment they meet and follows them through the dangerous political climate of Her Majesty’s jeweled city as dark powers seek to dismantle the clean-based power poised to send humanity to the stars. 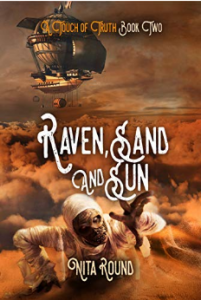 And my next steampunk find was Nita Round’s A Touch of Truth Book Two: Raven, Sand and Sun. (Okay, I admit the cover also really grabbed me and made me think of the 1980’s Mummy movies!) Her story: Lucinda, Ascara, and the Captain have survived several almost fatal encounters with various agents of Sh’Na. Now they must face the Mistress of the Night herself in the pyramid from Lucinda’s dreams and cut short the beast’s reign of terror. Captain Stoner, however, has met this Queen of the Desert before, and although the companions are together, she fears the three of them will not be enough to withstand Sh’Na’s evil.

Their journey is not a simple one and their trials start in the city of Port Ruth. Here the Captain must face her own past, fraught with its own perils, before they can enter the desert. Once outside the city, they travel into the inhospitable lands of sand and sun where they must face Sh’Na in a battle for more than their own lives. Failure means the end of everything. Success will bring the three to a new truth, and a new path will be revealed. 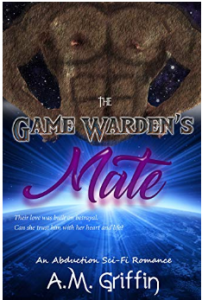 An intriguing plot powers The Game Warden’s Mate by A. M. Griffin. Here’s the blurb: The Hunter. As the new Game Warden, Xrez Ym’ihla brings patrons from across the galaxy to track prey in a game built to enslave the weak and mate the strong. The business is a long running family legacy and Xrez is determined to succeed as his father had before him. He hadn’t meant to let one human occupy his thoughts, mind, and body.

His lies may come back to haunt him, but if he reveals the truth, he’ll ruin his chance to capture the heart of the one he wants.

The Prey. Esme Valdez had her entire life planned from an early age. As a chemist, her life was average and mundane, just the way she liked it. Until the impossible happened. Never did she imagine being abducted by aliens and forced to participate in a survival of the fittest game called The Hunt. If she survives and makes it to the end, she’ll be freed. If not, she’ll be forced to mate the one who captures her.

Esme is determined to win at all costs, even if it means putting her trust in a sexy alien who taunts her in the most delectable way.

Their love was built on betrayal. Can she trust him with her heart and life? 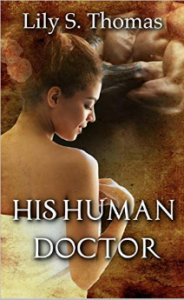 I love stories involving doctors and futuristic science fiction so I took note of His Human Doctor (Galactic Courtship Series Book 15) by Lily S. Thomas. The plot: Brenda’s an ER doctor and accustomed to the high level of stress that comes with the job, but when she accepts a position with the army, she begins to fear for her life. The war with the Sri’thaens is heating up, and she is on the front lines aiding the injured. Just when she believes her time is up, a Kellian soldier sweeps her off her feet and shows her there might be some hope left in this war.

The last place Ryrth thought he’d encounter his mate was on a war-torn human colony, but now that he has her, he’s reluctant to let go. Unfortunately, a soldier has to follow orders, and when he leaves her side, it nearly leads to her death. Now he wants her far from this war, but she’s more headstrong than he’d initially thought, and now he’s fighting two wars. 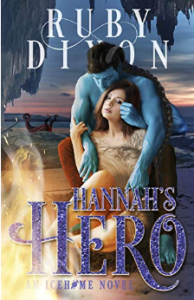 Ruby Dixon has released book 6 in her steamy Icehome series, which is affiliated with the Ice Planet Barbarians, also by Ms. Dixon. The new novel is Hannah’s Hero and here’s the blurb: All I want is Hannah.

We’ve resonated, but she avoids me. She has made it very clear that she wants no mate, whether he has two arms or four. But when others leave the Icehome beach camp for a getaway to a fruit-filled cave, Hannah wants to go, and she needs a companion.

For the first time, we talk…and I realize my female isn’t as good as ignoring me as she thinks. She watches me with hungry eyes. She blushes at my bold words. When I touch her? She no longer runs away.

It is time I show her that a Strong Arm hunter can be the right mate for her, and that four arms can hold her twice as closely as two. 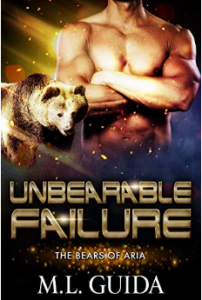 Sometimes the shape shifters found in paranormal romance can also be found in a science fiction romance, as with Unbearable Failure (Bears of Aria Book 2) by M. L. Guida. The story: Vaughn: Our women are dying on Aria and we don’t know why.

An Earth woman may have the cure, but she won’t hand it over.

I don’t like kidnapping, but she leaves me no choice.

And she’s my mate.

Sandra Rotella:  Everyone thinks I’m a failure. Except for an alien.

He’s desperate for my formula, desperate enough to abduct me.

And he tells me we’re fated to be together.

He believes I can save his people. But what if he’s wrong? 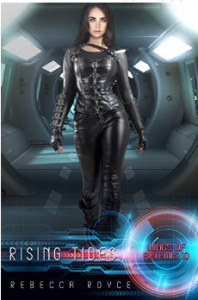 If you’ve been thinking about trying a reverse harem SFR,  Rising Tides (Wings of Artemis Book 10) by Rebecca Royce is a well-reviewed new release. The blurb: An embrace can offer comfort…

Amber Delacroix Chen reunited with her husbands only to have to send them off to war. Now a doctor, she works tirelessly to patch up the wounded to send them back to the front lines while protecting the people at the heart of the Chen Empire. She delivers babies, tends to the injured, the lost, and even her fellow physicians, everyone—except herself. Thankfully, she has her very own Z Warriors who will lay down their lives to protect her. After years of separation, anxiety, and pain, she is finally herself and the love she and her husbands share sustains her. In so many ways, Amber’s life is perfect, if only her husbands were with her.

An embrace can offer hope…

For their part, Amari, Shane, and Hunter are in the thick of the war with Evander. It’s a fight to save their planet, their empire, their way of life…and their wife. Time together is a precious commodity and fleeting seconds of passion must sustain them. The tide is rising and there is nothing they won’t do to win this war…but when enemies old and new come for them, there is nothing the Chens won’t do to save each other.

Their embrace can save them all… 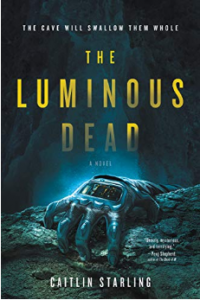 I’ll close with a page turner of a science fiction novel with romantic elements, The Luminous Dead by Caitlin Starling, which I read and enjoyed, although I have to say there was a LOT of detail about the alien caves and the futuristic spelunking equipment. The underlying mysteries and horror elements kept me reading and I like the way the romance resolved. Here’s the plot: When Gyre Price lied her way into this expedition, she thought she’d be mapping mineral deposits, and that her biggest problems would be cave collapses and gear malfunctions. She also thought that the fat paycheck—enough to get her off-planet and on the trail of her mother—meant she’d get a skilled surface team, monitoring her suit and environment, keeping her safe. Keeping her sane.

Instead, she got Em.

Em sees nothing wrong with controlling Gyre’s body with drugs or withholding critical information to “ensure the smooth operation” of her expedition. Em knows all about Gyre’s falsified credentials, and has no qualms using them as a leash—and a lash. And Em has secrets, too . . .

As Gyre descends, little inconsistencies—missing supplies, unexpected changes in the route, and, worst of all, shifts in Em’s motivations—drive her out of her depths. Lost and disoriented, Gyre finds her sense of control giving way to paranoia and anger. On her own in this mysterious, deadly place, surrounded by darkness and the unknown, Gyre must overcome more than just the dangerous terrain and the Tunneler which calls underground its home if she wants to make it out alive—she must confront the ghosts in her own head.

But how come she can’t shake the feeling she’s being followed?

I’ll be back in two weeks with more new releases for you!

Why are we afraid of monsters?